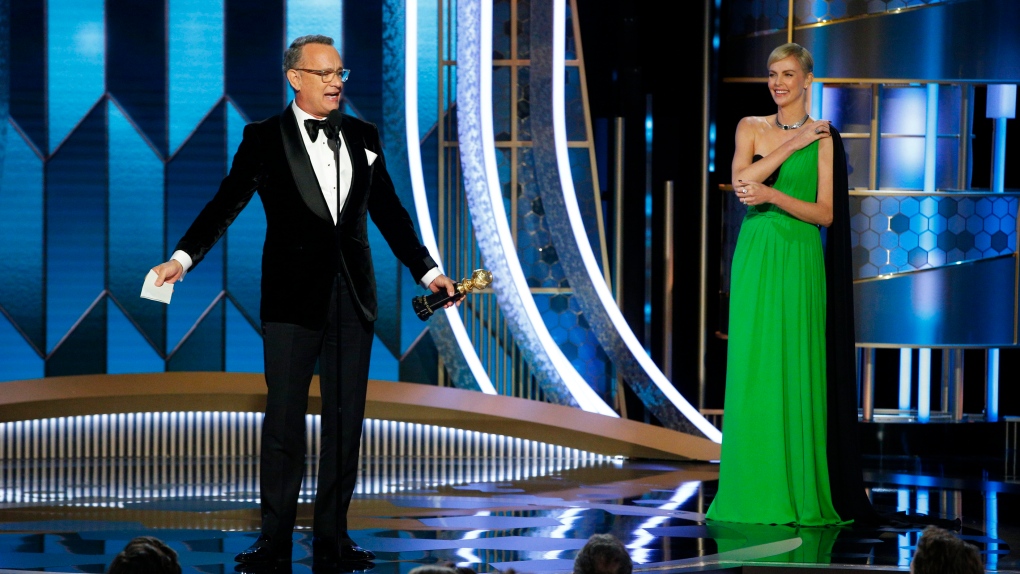 This image released by NBC shows Tom Hanks accepting the Cecil B. DeMille Award as presenter Charlize Theron looks on at right at the 77th Annual Golden Globe Awards at the Beverly Hilton Hotel in Beverly Hills, Calif., on Sunday, Jan. 5, 2020. (Paul Drinkwater/NBC via AP)

BEVERLY HILLS, CALIF. -- Just like in his four-decade career, Tom Hanks took the Golden Globes stage providing some laughs before shedding tears as he accepted the Cecil B. DeMille Award.

In a joking manner, Hanks apologized for having a cold that was the “size of Merv Griffin’s ‘Jeopardy’ royalties.” He then looked at a table in the ballroom at the Beverly Hilton Hotel, immediately turned around, leaving some in the attendance confused; he then turned back with tears in his eyes.

“A man is blessed with a family sitting down front like that,” Hanks said to his wife Rita Wilson and his kids at the table with her. “I can’t tell you how much your love means to me.”

He shifted from laughs to tears throughout the rest of the speech.

“It’s the cold,” he said after once again becoming emotional.

A video package of clips from his decades-long career began with Hanks’ guest-starring role in the 1980s television series “The Love Boat.” Though the show was known for cheesy appearances by celebrities with dim star wattage, Hanks ended up becoming one of Hollywood’s biggest beloved actors through an array brilliant performances, from “Big” to “Forrest Gump.”

The man, the myth, the legend, the recipient of the 2020 Cecil B. Demille award @tomhanks shares a priceless moment on stage with @CharlizeAfrica. The respect is mutual. The humility is real. #GoldenGlobes pic.twitter.com/hU4TZUvMiC

“It’s those moments as an actor where everybody I have ever worked with has helped me get to that place,” the double Oscar-winner said. “Sometimes it’s 3 o’clock in the morning and sometimes it’s 11 at night in which you just have to somehow put it all together, have faith in what the process is and go there.”

Charlize Theron, who presented the award to Hanks, praised him for his career achievements. She also thanked Hanks for her first audition for “That Thing You Do!,” a 1996 film he directed.

“While Tom does give us the chance to see ourselves on the screen, he also gives us something more profound,” Theron said. “He presents a vision of who we can be. He saw a nervous, sweaty young actress failing to mask a panic attack and her thick South African accent. That’s the kind of man he is. This is why we love Tom.”

The DeMille award is given annually to an “individual who has made an incredible impact on the world of entertainment.” Recent recipients Oprah Winfrey, Meryl Streep, Jeff Bridges and George Clooney.

Hanks, 63, is a four-time Golden Globe winner who broke through with his role in the 1984 film “Splash,” in which he played a man who falls in love with a mermaid. He claimed his first Globe in 1988 for “Big,” in which he portrayed a 13-year-old boy whose body turned into a 35-year-old man overnight after making a wish.

The actor won a couple Globes for “Philadelphia” and “Forrest Gump,” two films that earned him Academy Awards. He was also lauded for his directing work in HBO’s 2001 miniseries “Band of Brothers,” which won an Emmy.

In 2014, Hanks received an award at the Kennedy Center Honours. He also was given a lifetime achievement award by the American Film Institute in 2009.

Hanks was nominated at Sunday’s Globes for his role as Mister Rogers in the biopic “A Beautiful Day in the Neighborhood.” His other upcoming projects include the WWII drama “Greyhound,” which he wrote; the post-apocalyptic “BIOS”; and the post-Civil War film “News of the World.”

Hanks said backstage that he plans on filming for the role of Col. Tom Parker, the manager of Elvis Presley.

“I will then finally have an answer to all these stupid questions about why I never played a bad guy,” he said as the room burst into laughter.

IN PHOTOS: Celebrities walk the red carpet at 2020 Golden Globes

A mix of risk-takers and classic Hollywood at Golden Globes

A list of the final Golden Globe Award winners for film, TV