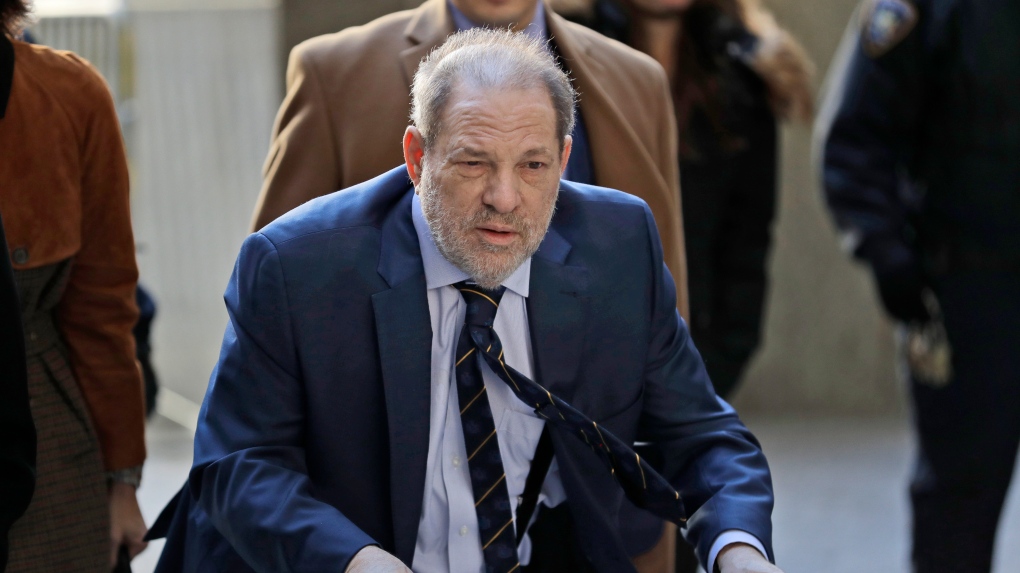 NEW YORK -- A woman who says Harvey Weinstein raped her when she was 17 is among four plaintiffs in a new lawsuit against the imprisoned movie mogul, the latest court action accusing him of decades of vile sexual behaviour.

The woman, now 43, alleges Weinstein forced her to disrobe, demanded she perform oral sex on him and raped her in a hotel room in 1994 during what she thought would be a meeting about helping her break into the entertainment business, according to her allegations in the lawsuit filed Thursday in New York City.

The woman, now living in Tennessee, alleges that Weinstein was nearly naked when she walked into the room and that he threatened her after the rape. She says that he made her hand over her driver's license and told her that she'd never act in films and that he would have associates harm her and her family if she told on him.

Weinstein's lawyer said the disgraced film producer -- now serving 23 years in prison for a February rape conviction -- intends to defend himself against the claims in the new lawsuit, some of which date back even earlier.

Lawyer Imran Ansari said some of the claims may be barred by the statute of limitations, though the woman alleging she was raped when she was 17 is suing in state court under New York's Child Victims Act, which opened a window for people to sue over sexually abuse they say they endured as children, sometimes decades ago.

A former model who says Weinstein sexually assaulted her when she was 16 sued him in December under the act, saying she didn't want to be included in a proposed global settlement that would split $25 million among various accusers because the compensation wasn't enough and because it didn't hold Weinstein and his enablers accountable.

In Thursday's lawsuit, another woman alleges Weinstein jammed his tongue into her mouth and fondled her breasts and vagina as he pinned her against a hotel door at the Cannes Film Festival in France in 1984.

The woman, now 70 and living in Ecuador, alleges a friend who worked with Weinstein told her she should keep quiet or be blackballed from the industry.

The two other plaintiffs are a woman, now 38 and living in New York, who alleges Weinstein raped her during a supposed business meeting at a Manhattan apartment in 2008; and a woman, now 35 and living in Hungary, who says he forced her to perform oral sex on him in a hotel suite.

The women are suing Weinstein; his brother and former business partner, Bob; Miramax, the movie studio they founded; Disney, which once owned Miramax; and 10 "doe corporations," renewing allegations made elsewhere that they knew of his behaviour and didn't stop him.

Bob Weinstein's lawyer, Gary Stein, called the lawsuit "yet another attempt to hold our client responsible for alleged sexual assaults committed by Harvey Weinstein" and said "to date, each and every claim like the ones asserted here have been dismissed against our client. We are confident that the same will be true with respect to the allegations in this complaint."

Weinstein, the Oscar-winning producer of "Shakespeare in Love," was convicted of raping an aspiring actress in 2013 and forcibly performing oral sex on a TV and film production assistant in 2006. His lawyers have said they'll appeal.

An effort by Los Angeles prosecutors to have him arraigned there on charges that he raped a woman and sexually assaulted another in 2013 has been put on hold because of the coronavirus crisis.

Soon after arriving in state prison in March, Weinstein tested positive for the virus. He has recovered, his spokesman said.

The women in Thursday's lawsuit are identified in court papers only as Jane Doe I-IV. The Associated Press does not typically identify people who say they are victims of sexual assault unless they grant permission.