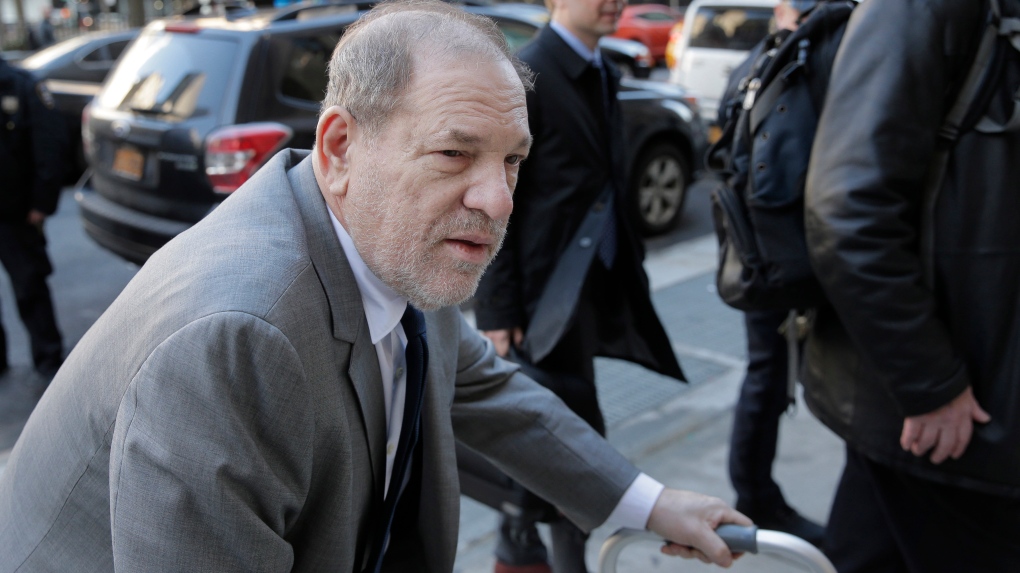 NEW YORK -- As if picking a jury for Harvey Weinstein's rape trial wasn't complicated enough, some potential jurors have been posting on social media about their involvement in the case, violating court rules that could land them behind bars, the judge said Wednesday as the selection process stretched into a seventh day.

Meanwhile, Weinstein's lawyers are renewing their demand that the trial be moved out of New York City, citing "flash mob" protests in the streets whose chants can be heard 15 stories up in the courtroom and a crush of reporters and photographers that have turned the case into "a "media and entertainment circus."

The defence, having lost an earlier change of venue request, said the "carnival-like atmosphere" surrounding jury selection, coupled with the frenzy over supermodel Gigi Hadid's appearance in the jury pool and social media comments by prospective jurors showed Weinstein won't get a fair shake in his hometown.

In the last few days, Judge James Burke has been amplifying his warnings about social media, turning last week's posts into a cautionary tale as he's welcomed groups of 120 or so potential jurors into his Manhattan courtroom.

"The court was alerted recently that a few prospective jurors from last week went on Facebook and Twitter as if I hadn't just said not to, what was it, a hundred times? A thousand times? Was anything I said ambiguous?" Burke said, warning the latest batch of prospective jurors not to do the same.

In all, more than 600 potential jurors have been summoned for the high-profile case. Many were eliminated from contention early on after indicating they couldn't be fair and impartial. Fewer than 200 will be back for additional questioning beginning Thursday.

Burke said he expects a panel of 12 jurors and six alternates to be seated in time for opening statements and testimony on Jan. 22. He told prospective jurors that he expected the trial to finish up in early March.

Though she told judge on Monday that she thought she could "keep an open mind on the facts," the defence and prosecutors agreed later that having her on the jury would be too much of a commotion.

Weinstein, 67, is accused of raping a woman in a Manhattan hotel room in 2013 and sexually assaulting another in 2006. The former studio boss behind such Oscar winners as "Pulp Fiction" and "Shakespeare in Love" has said any sexual activity was consensual.

Walking the latest batches of prospective jurors through what to expect -- and what not to do -- the judge said anyone posting about their jury service in the Weinstein case faces being held in contempt of court and consequences including up to 30 days in jail. He warned them not to speak about the case with anyone.

Weinstein's lawyers raised the social media issue in court papers last week. They cited postings from several people they said were prospective jurors as they made an unsuccessful push to conduct the remainder of jury selection in private, out of the view of the news media and the public.

One man purportedly in the running for Weinstein's jury tweeted about leveraging "serving on the jury of a high-profile case" to promote a novel he wrote. Another potential juror reacted with a laughing emoji when someone asked if she'd been picked, according to Weinstein's lawyers.

The disgraced movie mogul and his lawyers spent the first hour of Wednesday's court session behind closed doors, working with prosecutors to whittle down the pool of prospective jurors by examining responses to a questionnaire each was asked to fill out.

The survey asked, among other things, if they could ignore media coverage and decide the case based only on evidence heard in court. They were also asked if they or someone they knew had been a victim of sexual violence.

About 70 of the 120 prospective jurors summoned to court Wednesday were asked to return Thursday, though some could find themselves sent home rather quickly once the lawyers get a chance to read through their questionnaires.

The remainder of Wednesday's group was dismissed for various reasons, most of them because they indicated they could not be fair and impartial.

Mazdack Rassi, a production studio co-founder whose fashion editor wife appeared on Weinstein-produced "Project Runway: All Stars," was rejected after saying he knew the producer and didn't think he could be impartial.