Weinstein jury indicates it is split on most serious counts 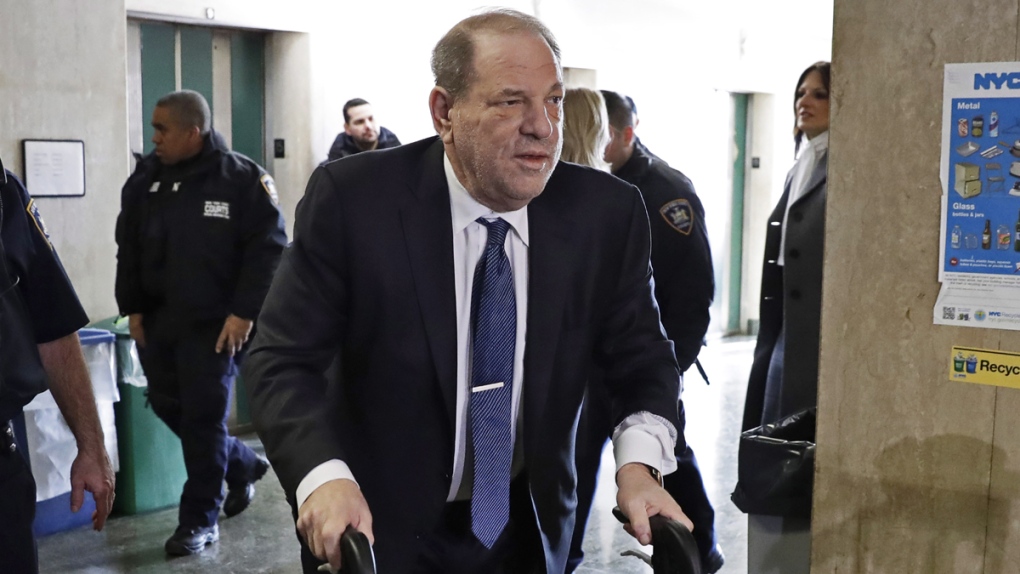 Harvey Weinstein arrives at a Manhattan court as jury deliberations continue in his rape trial, on Feb. 21, 2020. (Richard Drew / AP)

NEW YORK -- The jury in Harvey Weinstein's rape trial indicated Friday that it is deadlocked on the most serious charges against the once powerful Hollywood mogul, but the judge told the panel it must keep working.

In a note to the judge late in the fourth day of deliberations, jurors asked if it was permissible for them to be hung on one or both counts of predatory sexual assault while reaching a unanimous verdict on the other charges.

Weinstein's lawyers said they would accept a partial verdict, but prosecutors said no and Judge James Burke refused to allow it. He sent jurors back to deliberate for a few more minutes before letting them go home for the weekend. They'll resume Monday morning.

The jury posed its deadlock question in hypothetical fashion, writing: "We the jury request to understand if we can be hung on (Count) 1 and/or (Count) 3 and unanimous on the other charges? Thank you."

One reason for that phrasing could be that the verdict sheet -- which lays out the charges -- doesn't include instructions for what to do if they can't agree on a particular count, only how they're supposed to proceed once they've reached a verdict of guilty or not guilty.

The way the sheet is designed, jurors are supposed to first reach a unanimous verdict on the predatory sexual assault counts, which carry a maximum penalty of life in prison, before they can even consider the other three counts.

Law professor Cheryl Bader said the note suggests the jury is split on a key aspect of both predatory sexual assault counts -- "Sopranos" actress Annabella Sciorra's allegations that Weinstein attacked her in the mid-1990s -- and that it is in unanimous agreement on the allegations by two other women -- an aspiring actress who says he raped her in March 2013 and a former film and TV production assistant, Mimi Haleyi, who says he forcibly performed oral sex on her in March 2006.

Weinstein has maintained any sexual encounters were consensual.

The Associated Press has a policy of not publishing the names of people who allege sexual assault without their consent. It is withholding the name of the 2013 rape accuser because it isn't clear whether she wishes to be identified publicly.

"It's not unusual for the judge to have them keep deliberating and not just give them a pass at the first sign of trouble," said Bader, a former federal prosecutor who teaches at Fordham University School of Law.

The defence said speculating on the verdict at this point "would be premature and a mistake."

In all, Weinstein, 67, is charged with five counts stemming from the allegations of Sciorra, the aspiring actress and Haleyi.

To convict Weinstein of a predatory sexual assault charge, jurors must agree on two things: that Weinstein raped or forcibly performed oral sex on Sciorra, as she alleges, and that he committed one of the other charged offences.

The predatory sexual assault charge requires prosecutors to show that a defendant committed a prior rape or other sex crime, but doesn't have the statue of limitation constraints that would bar Sciorra's allegations from consideration on their own.

Since getting the case Tuesday, jurors have been focusing a lot of attention on Sciorra, who testified nearly a month ago and was the first accuser to do so in the closely watched .MeToo trial.

They started the day Friday by listening to a reading of her cross-examination and follow-up questioning by prosecutors. About 90 minutes into the reading, the jurors notified the judge they had "heard enough" and resumed their deliberations.

Earlier in their deliberations, jurors looked at emails that Weinstein sent regarding Sciorra, including ones to the private Israeli spy agency he allegedly enlisted to dig up dirt on would-be accusers as reporters were working on stories about allegations against him in 2017.

Sciorra, now 59, told jurors how Weinstein showed up unexpectedly at the door of her Manhattan apartment before in late 1993 or early 1994 before forcing her onto a bed and assaulting her.

Bader said she was surprised the jury appears to be struggling with Sciorra, "because she was a much cleaner witness" than the other alleged victims, who admitted to having non-forced sex with Weinstein and staying in touch with him after their alleged assaults.

Sciorra went public in a story in The New Yorker in October 2017 after one of the few people she says she told about the incident, actress Rosie Perez, got word to reporter Ronan Farrow that he should call her.

Sciorra's allegations weren't part of the original indictment when Weinstein was arrested in May 2018, but after some legal shuffling they were included in an updated one last August.