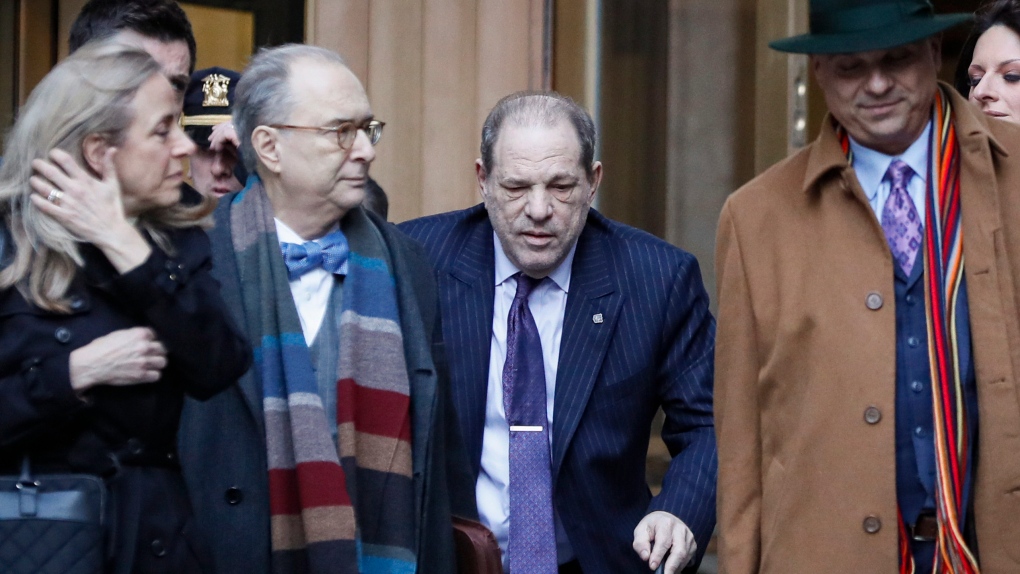 NEW YORK -- Deliberating for a third day, the jury at Harvey Weinstein's trial continued Thursday to focus a lot of attention on actress Annabella Sciorra's linchpin allegations that the once-heralded Hollywood mogul raped and sexually assaulted her in the mid-1990s.

Jurors, before being dismissed for the day without a verdict, sent the judge a note asking to hear a reading Sciorra's testimony when they return to court on Friday.

The jury has already looked at emails that Weinstein sent regarding Sciorra, including ones to the private Israeli spy agency he allegedly enlisted to dig up dirt on would-be accusers as reporters were working on stories about allegations against him in 2017.

In previous days, there has been a flurry of notes requesting to rehear testimony and see pieces of evidence that marked the first two days of deliberations.

Sciorra's allegations are too old to be charged on their own because of the statute of limitations in effect at the time. But, because of a quirk in the law on charging someone as a sexual predator, they are key to the most serious charges that jurors are weighing in the closely watched .MeToo case.

Weinstein, 67, is charged with five counts stemming from the allegations of Sciorra and two other women -- an aspiring actress who says he raped her in March 2013 and a former film and TV production assistant, Mimi Haleyi, who says he forcibly performed oral sex on her in March 2006.

Sciorra's account is the basis for two counts of predatory sexual assault, a charge that carries a maximum penalty of life in prison. The charge requires prosecutors to show that a defendant committed a prior rape or other sex crime, but doesn't have the time constraints that would bar Sciorra's allegations from consideration.

To convict Weinstein of that charge, jurors must agree on two things: that Weinstein raped or sexually assaulted Sciorra and that he committed one of the other charged offences.

The Associated Press has a policy of not publishing the names of people who allege sexual assault without their consent. It is withholding the name of the rape accuser because it isn't clear whether she wishes to be identified publicly.

Weinstein has maintained that any sexual contact was consensual.

Sciorra was the first accuser to testify and took the witness stand nearly a month ago, telling jurors how Weinstein barged into her Manhattan apartment and raped and forcibly performed oral sex on her in late 1993 or early 1994. She said the encounter initially left her confused about what had happened.

When asked if she thought she had been raped, Sciorra replied: "I didn't really know.... I don't know because I thought he was a nice person."

Jurors signalled their interest in Sciorra soon after deliberations got underway on Tuesday, sending a note seeking clarity on why Weinstein wasn't charged with other crimes stemming from her allegation. The judge replied that they "must not speculate as to any other charges that are not before you."

The jury of seven men and five women finished Wednesday's deliberations by revisiting actress Rosie Perez's testimony about what she says Sciorra told her soon after the alleged assault.

Perez said her friend Sciorra had told her at some point in 1993, her voice shaking on the phone, that something had happened to her: "I think it was rape."

Perez testified that months later, on a phone call from London, Sciorra said Weinstein was harassing her and she was scared.

"I said, `He's the one that raped you,"' and they both began crying, Perez testified.

"Please go to the police," Perez said she told Sciorra.

She said Sciorra responded: "I can't -- he'd destroy me."

Weinstein's lawyers have attempted to cast doubt on Sciorra's suggestion that she couldn't deflect Weinstein's advances and felt powerless to hold him accountable.