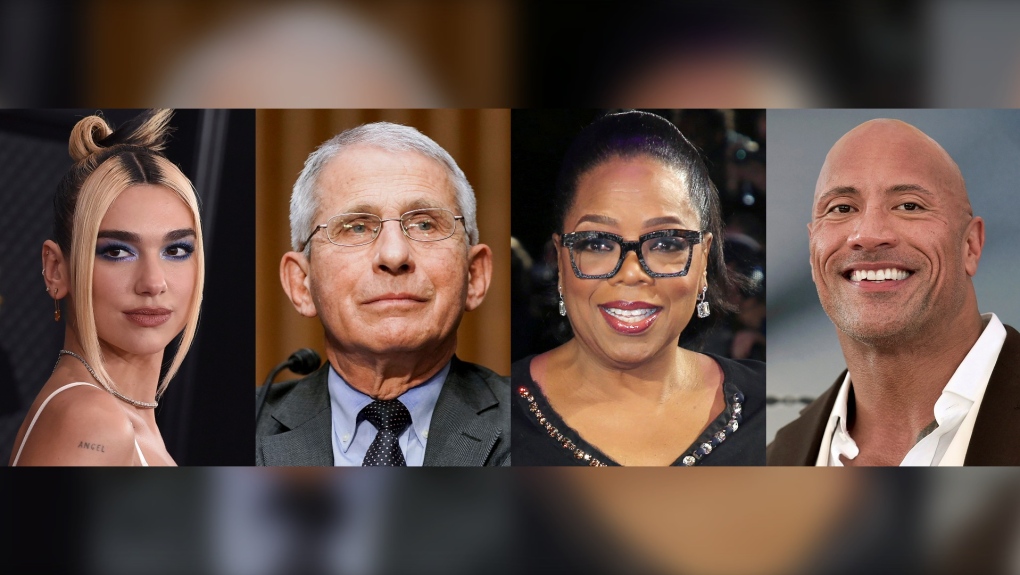 This combination photo shows singer Dua Lipa, from left, Dr. Anthony Fauci, Oprah Winfrey, and Dwayne “The Rock” Johnson, who are among the winners Tuesday at the Webby Awards, which recognize the best internet content and creators. The Webby Person of the Year went to Fauci for using digital and social media to reach the masses with credible and factual COVID-19 information. (AP Photo)

The Webby Person of the Year went to Fauci for using digital and social media to reach the masses with credible and factual COVID-19 information. DuVernay won the Film and Video Person of the Year trophy for her efforts creating a database to diversify Hollywood.

This year marks the 25th anniversary Webby Awards, selected by the International Academy of Digital Arts & Sciences. It was hosted by actor and activist Jameela Jamil, with appearances from Naomi Watts, Padma Lakshmi and Gayle King, among others.

"It's a unique year for the internet. It's that one thing that has kept us connected all year," said Claire Graves, president of The Webby Awards. "Our winners are a testament to that, really. They've kept us connected in so many different ways. They've informed us -- like Dr. Fauci -- uplifted us and helped us spark global movements as well."

The awards started in 1996 by recognizing websites. It has grown to embrace new technologies, from apps and software to social media and games. This year, organizers added virtual and remote experiences.

Ahmed and Day won acting awards for "Sound of Metal" and "The United States vs. Billie Holiday," respectively. Johnson's use of social media earned him a special achievement award, as did chef Jose Andres, who was recognized for tackling food insecurity.

Other winners include Oprah's Book Club, "Ratatouille: The TikTok Musical," "NBC Nightly News: Kids Edition," "We Are George Floyd" and the podcasts "Pod Save America," "The Motherly Podcast" by Kristen Bell and "Jemele Hill is Unbothered."

Neil deGrasse Tyson won a Webby for his science and education podcast. Chef Gordon Ramsay, the band BTS and actor Jennifer Garner were among Webby winners voted on by the public.

This year also marks the inaugural special achievement award -- the Webby Anthem Award -- which was awarded to Pharrell Williams for his work towards racial equity in education and entrepreneurship.

The Anthem Awards, launching in June 2021, will celebrate the purpose and mission-driven work of people, companies and organizations worldwide.

Another new award is the Webby Advocate of the Year, which went to "black-ish" and "grown-ish" star to Yara Shahidi for her social justice advocacy and her turn-out-the-vote efforts.

The Webby Social Movement of the Year Winner was Stop AAPI Hate for using the Internet to effectively track and respond to incidents of hate and discrimination against Asian Americans and Pacific Islanders in the United States.

The academy also announced Comedy Central as the Webby Media Company of the Year after earning the most honors across all Webby categories and 14 wins overall.

"The way that people have used the Internet has accelerated so much this year that it will be interesting to see how people continue to use the new technology," Graves said. "The internet is not stopping. It's going to continue to grow and develop."