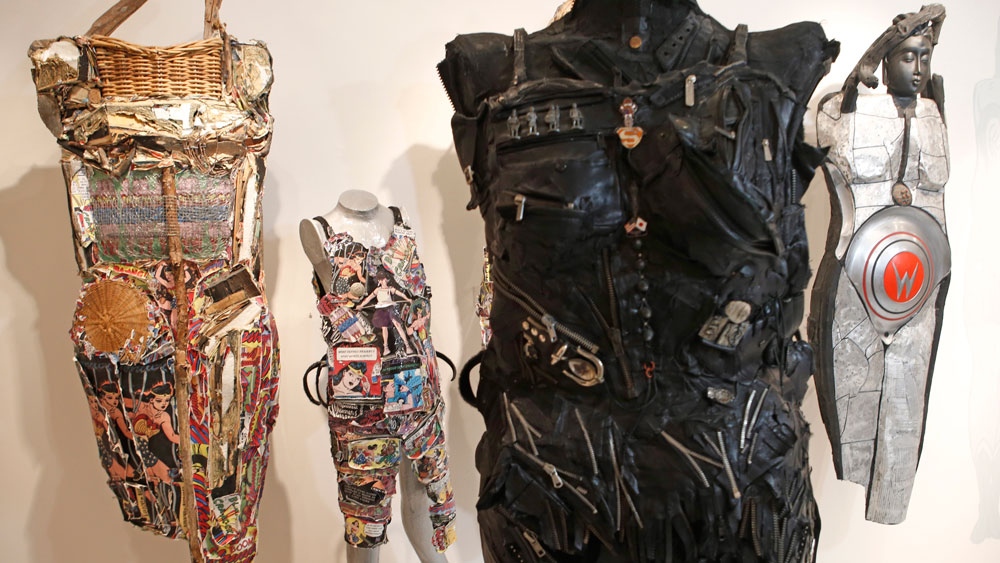 Some of artist-activist Linda Stein's sculptural avatars, including one for a child, second from left, are displayed in her gallery and studio space in New York on July 10, 2014. (AP / Kathy Willens)

NEW YORK -- Linda Stein wants people to armour themselves in her art.

Her idea grew out of her sense of vulnerability after the Sept. 11 attacks, with the aim of giving wearers a sense of empowerment and protection. Her targets are any form of institutionalized oppression, such as sexism, racism and homophobia.

She also designs "bullyproof vests," made from a patchwork of fabrics featuring such female symbols as the Japanese anime character Princess Mononoke and the comic book hero Wonder Woman, along with words "I will ... not let cultural impediments and sexual stereotypes hold me down."

At a recent "body swapping" at her Tribeca studio, she invited a group of professional women to try on what she calls sculptural avatars, which can each weigh from seven to 20 pounds. Stein asked the wearers to imagine they are trying on another skin "to get in touch with how their bodies feel."

"It's like putting on a whole new persona," said Rinku Sen, who struck a "Rocky" pose in front of a mirror in a "Wonder Woman" torso made of acrylicized paper.

Another participant, Dana Sparling, donned a heavier metal creation she said felt like a "shield between me and the world."

Stein explained that she features Wonder Woman prominently in the works because "she never killed."

"She protected the weak and downtrodden wearing her bracelets and her black lasso. It's very hard to find a female superhero that's not violent and isn't a total sex object," Stein said.

The representation of gender and sexual identity is a longstanding tradition in activist art that dates back to the feminist movement, said Muhlenberg College art history professor Margo Hobbs. She said Stein's work is particularly powerful because "it works on the viewer's body to bring about a really visceral rather than an intellectual experience."

Reminiscent of classical torsos, a group of her sculptures is making the rounds at 24 universities, galleries and museums across the country in what is a seven-year travelling exhibition, "The Fluidity of Gender," that runs through 2017. The exhibition is accompanied by a lecture and "body-swapping" performance in which participants explore gender roles and stereotypes.