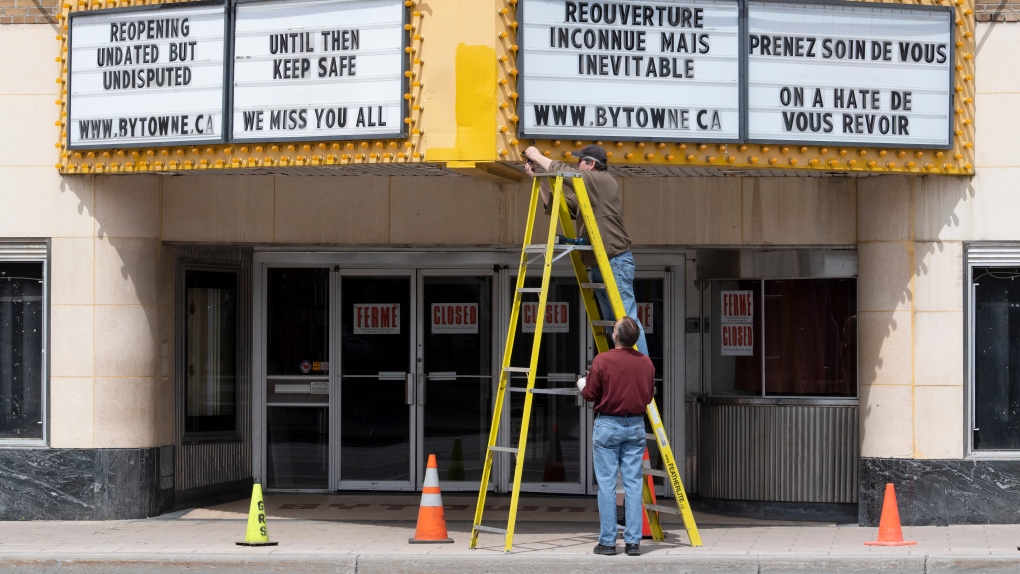 Two men work on the marquee of an independent theatre in Ottawa, Wednesday, May 6, 2020. THE CANADIAN PRESS/Adrian Wyld

TORONTO -- Theatres already struggling with COVID-19 shutdowns face an even tougher landscape going into 2021 after one of the biggest Hollywood studios revealed that it plans to stream a year’s worth of films online.

Warner Bros. Pictures announced Thursday that its entire 2021 slate of films will be available for audiences to stream on HBO Max in the U.S. The hybrid distribution model means that movies will go live on the streaming service the same day as they hit theatres, and will remain online for one month.

The decision does not apply to Canada, where upcoming Warner Bros. films -- including big-budget “Matrix” and “Godzilla” sequels -- will only be released in theatres.

The exception offers little relief to Canadian theatres that see the Warner Bros. decision as part of a larger trend as audiences increasingly choose the convenience of their couch over the ambiance of the silver screen. To make matters even tougher, the pandemic has made it impossible for even the keenest movie-goers to support their local cinema.

“The business model itself is in tatters,” Tom Hutchinson, president of Magic Lantern Theatres, told CTVNews.ca in an email on Thursday.

Going to the movies used to be a weekly event, Hutchinson said, particularly in the first half of the 20th century, when owning a television was considered a luxury. A recent report by Telefilm suggests that visits to the theatre have dropped dramatically since then, with Canadians only going to the movies about five times per year.

“In large part this slide in attendance has been due to increasing availability of home based entertainment options,” Hutchinson said.

When audiences decline, ticket sales go down. Without ticket sales, theatres built to last generations can be forced to go out of business.

“What we are seeing today is that trends and factors are changing so fast as to make the best wisdom at the time they are planned obsolete very quickly. Again, COVID has accelerated this trend, and I believe that acceleration will continue,” Hutchison said.

You don’t need to look very far to see the impact of these market challenges. In August, Calgary’s Plaza Theatre — which first started screening films in 1935 — announced that it was looking for someone new to take over its lease.

Earlier this week, Ottawa’s Bytowne Cinema revealed that it would be closing after more than 30 years. COVID-19 played a major role in the decision, but the theatre admitted it also struggled to compete with the era of streaming.

“Since the pandemic hit, distributors have also had to make some business decisions,” theatre owners said in a statement. “They've sold some titles to streaming services, skipping the marketing expense of releasing them to only a few limited-seating cinemas. Other movies have been moved from fall and winter releases to, well, some unspecified point in a possibly rosier future.”

Canada’s largest theatre chain, Cineplex, has fought back against streaming by redefining what “a night at the movies” can look like. Six Cineplex locations offer 4DX theatres, which uses environmental effects like wind, mist, fog and even scents to create an immersive theatre experience. For example, in a 2016 screening of “Dr. Strange,” a sprinkling of snow fluttered in front of the screen during a mountaintop scene.

While streaming has long been a known threat to the theatre business for years, COVID-19 shocked the industry and led to $98.9-million loss for Cineplex in its second quarter. The theatre chain responded by offering cheaper tickets, distanced seats and by streaming NHL and NBA games in the summer, back when public health authorities allowed theatres to remain open.

To understand the magnitude of the Warner Bros. decision, it’s important to consider how the theatre business model works. Film critic Radheyan Simonpillai pointed out that theatres rely on major film events — or blockbusters — to bring in revenue.

“You’re talking about really big movies that theatres rely on. We already knew it was going to happen with Wonder Woman at Christmas, but you’re talking about Matrix 4, Suicide Squad, Dune. And the whole theatrical movie business has built itself around these blockbusters where everything else is filler,” he told CTV News Channel on Friday.

If more Hollywood studios follow Warner Bros.'s lead, and Canadian theatres are forced to compete with streaming services for the biggest releases of the year, the industry will undoubtedly suffer.

“So when you say that you’re going to put those (blockbusters) simultaneously on a streaming service and theatres, that could be devastating,” Simonpillai said.

With files from CTVNews.ca's Ben Cousins