Want a hippo for Christmas? The story of a girl who got one 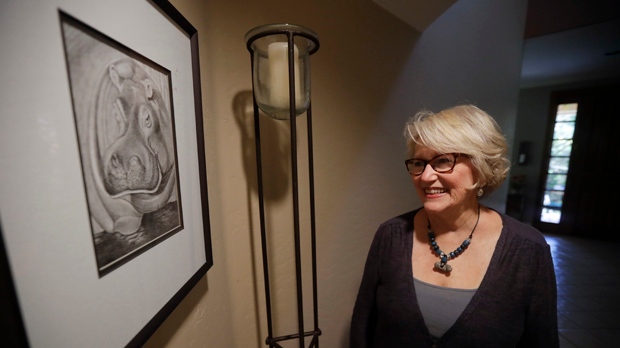 Gayla Peevey, singer of that enduring Christmas classic, "I Want a Hippopotamus For Christmas," stands next to an image she drew of a hippopotamus in her home Wednesday, Dec. 14, 2016, in La Mesa, Calif.(AP Photo/Gregory Bull)

LOS ANGELES -- All a cute, curly haired 10-year-old girl named Gayla Peevey wanted for Christmas in 1953 was a hippopotamus.

And amazingly enough, after "I Want a Hippopotamus For Christmas" became the biggest hit song of that holiday season, she actually got one, a 700-pound baby named Matilda. She promptly donated it to the Oklahoma City Zoo, where it lived to be nearly 50, a ripe old age for hippos.

As for Peevey's song, it may never die.

"That one just really took off, and it's still going strong, stronger than ever. Sixty-three years later! Hard to believe," Peevey, an ebullient woman of 73, says during a recent phone interview from her San Diego-area home.

So much so that it's used as a cellphone ringtone these days, included on holiday ornaments and Christmas cards, available for download on iTunes. It's even featured in a U.S. Postal Service commercial in which the post office boasts it ships more online gifts, hippopotamuses included, than anybody.

Some people will tell you it's an annoying ear worm, a tune with such silly lyrics and a melody so maddeningly memorable that it will play endlessly in your head every holiday season until New Year's Day.

But that's part of its charm, says Tim Moore, iHeart Radio's New Hampshire programming director who over the decades has played it plenty of times.

"It's got the sound of an old-time recording," Moore says. "It sounds dated. It sounds a little corny. But that's the thing about it. Also, not to be discounted is its effect on children."

For years, Peevey has been hearing from schoolteachers around the world who tell her their students perform the song and can't get enough of it.

Other songs come and go, says Caro, but "Hippo" stays in the mix every year at Arcadia's Longley Way Elementary School.

"Even in class today, we weren't in rehearsal yet when one kid started singing it, and then they were all singing it," added the teacher, who says it has a bounce and a cheeriness that kids love.

And who knows, singing it may actually get a kid a hippo. Unlikely, perhaps, but it did get one for Peevey.

Her hometown zoo, hippoless at the time, teamed with the local newspaper to encourage people to send in enough money to buy her one after she debuted the song on television's "The Ed Sullivan Show."

Three thousand dollars later, Matilda arrived on Christmas Eve, a fitting gift for someone who would so enthusiastically declare, "No crocodiles, no rhinoceroses. I only like hippopotamuses. And hippopotamuses like me too."

Soon after, however, Peevey left her hippopotamus behind, moving to California.

She had been singing professionally for two years before recording "Hippo," moving up from local watermelon festivals to radio shows and then a spot on television's "Saturday Night Revue" hosted by Hoagy Carmichael.

But her hippo fame caught her off guard, and for months afterward she couldn't move around Oklahoma City without being mobbed by fans. Her parents figured she'd blend in as just another "normal kid" in California while recording a few more songs.

None would have the impact of that first one, written by John Rox and personally selected for Peevey by Columbia Records' legendary producer and A&R man Mitch Miller, who backed her with his orchestra.

She did resurface briefly in 1959 with "My Little Marine," an aching teen ballad she'd written about her first crush. She recorded it under the name Jamie Horton, her manager not wanting people to dismiss it as another hippo song. It peaked at No. 84 on Billboard's Hot 100.

"A hit but not a big hit," she says now. "Certainly not a hit as big as the hippopotamus song."

Soon after, she was off to college, then marriage and motherhood. Eventually she founded her own advertising agency, keeping her hand in music writing commercial jingles.

Retired and married for 53 years now, she still sings regularly in church.

"But not the hippo song," Peevey says, laughing. "It's not really a church song."