Walk Off the Earth tell story behind YouTube Award-nominated video 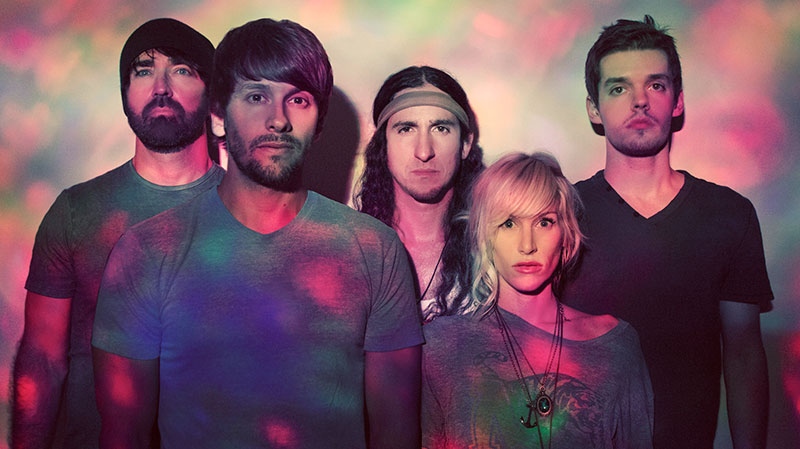 TORONTO -- When Walk Off the Earth recruited Canadian beat-boxing champion Terry (KRNFX) Im to appear in one of their meticulously crafted YouTube videos, it's possible he didn't know quite what he was getting into.

The Burlington, Ont., indie-pop band wanted to use the "Canada's Got Talent" finalist's unique skills for an a capella take on Taylor Swift's smash kiss-off "I Knew You Were Trouble."

It was all going to be completed in a day with no prior rehearsal and -- like all of Walk Off the Earth's eye-catching videos -- would be recorded in a single long take. Easy, right?

"Terry, that was the first video he'd done with us and I don't know what he expected going into it," multi-instrumentalist Ryan Marshall said in a telephone interview this week. "We told him it's one take, we go and we get it. So if you screw up, no worries, we do it again.

Marshall says it ultimately took somewhere between 25 and 30 takes to get the right one. They worked at it for 14 hours straight, using no instruments at all.

So they've become adept at shrugging off frustration.

"That's the one thing about Walk Off. We don't fight about stuff like that. Most of our videos, they take so long because everyone has to get the perfect take. We kind of sacrifice that (due to) the fact that we don't know how to edit videos. So we need them to be one take or else they're going to look like crap."

Well, the band's -- and Im's -- hard work paid off, as they secured a nomination at the inaugural YouTube Music Awards, to be held this Sunday in New York and streamed online (you probably don't need to be told where).

The quintet is up for best response video (best fan remix, parody or response video), one of only six categories at the event. They're also going to perform, perhaps an even greater coup given the other names scheduled to appear: Lady Gaga, Eminem, Arcade Fire, Avicii, M.I.A., Tyler the Creator and Earl Sweatshirt.

"It's wild," Marshall said. "To be involved in an awards show with names like that ... it's very humbling for us."

In YouTube terms, however, Walk Off the Earth is nearly as big or bigger than some of those marquee names.

By far their most popular video is still their cover of Gotye's "Somebody I Used to Know," completed with all the members using a single guitar (it's racked up 155 million views). Next is an instrument-swapping version of Adele's "Someone Like You" (17.4 million), their aforementioned Swift cover (16.1 million) and a cheerfully infectious tune of their own creation, "Red Hands," with 7.8 million clicks.

Marshall admits the band pays attention to how many views their videos rack up, but they don't sweat it when a song attracts less attention than they'd hoped.

"As much as we don't like to see videos with low counts, it's nothing we get concerned about," he said. "We just say: 'that video probably did kind of stink."'

When Walk Off the Earth's inventive videos first started gaining attention -- the Gotye video was the first to connect -- they were an unsigned band that had been diligently working for years for a break. After the cover took off, they signed a record deal with Sony and appeared on "Ellen." Their brightly coloured major-label debut "R.E.V.O." went gold, "Red Hands" is double-platinum and they've merited two Juno Award nominations.

In other words, they have such resources at their disposal that they could leave the D.I.Y. video esthetic behind, but Marshall says it's not going to happen.

"That's really important to us," he said. "We look at YouTube as somewhere where anyone can put up their music and have hundreds of thousands and hopefully millions of views without you needing a major label or a huge budget behind you. So we don't want to start throwing all these high-production videos onto YouTube even if we could do it right now."

They aren't totally opposed to more expensively produced clips, he notes, "but we make sure to try to put the humour in it. We're not doing it to compete with Rihanna's $50 million video, we're trying to have fun and we want to entertain our fans."

"We're never going to move away from the low budget ones," he adds. "We still shoot videos off our iPhones."