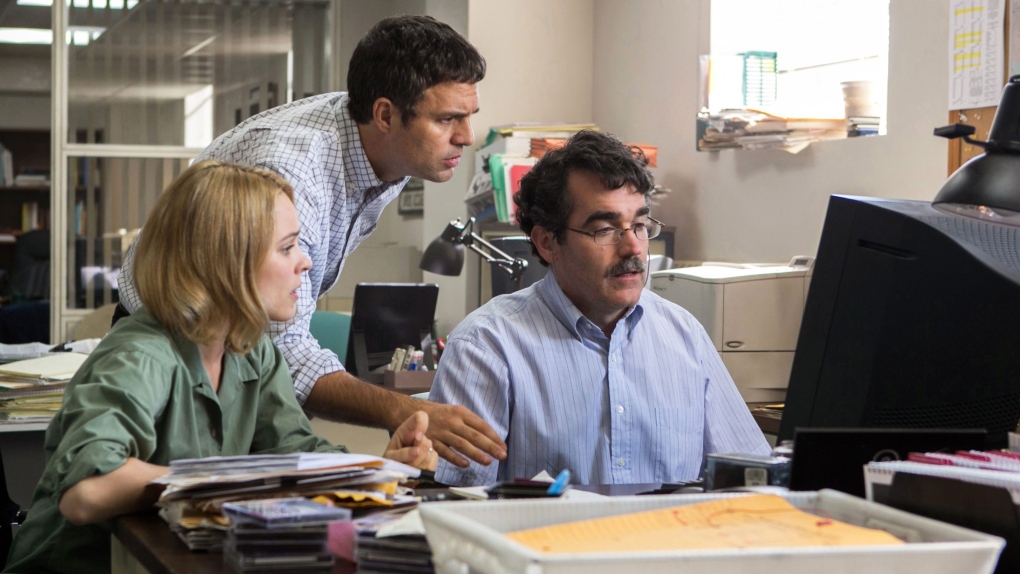 This photo provided by courtesy of Open Road Films shows, Rachel McAdams, from left, as Sacha Pfeiffer, Mark Ruffalo as Michael Rezendes and Brian d’Arcy James as Matt Carroll, in a scene from the film, 'Spotlight.' (Kerry Hayes)

VATICAN CITY -- The Vatican newspaper praised Oscar-winning film "Spotlight" on Monday as having given voice to the "profound pain" of the faithful over the reality of clerical sex abuse, and insisted it's not an anti-Catholic film.

L'Osservatore Romano dedicated two articles in its afternoon editions to the Academy Awards and the Best Picture won by "Spotlight," about the Boston Globe's 2002 expose of the hundreds of Boston children who were raped and molested by Catholic priests and the church's systematic coverup of the crimes.

L'Osservatore quoted producer Michael Sugar's acceptance speech-- "Pope Francis, it's time to protect the children and restore the faith" -- saying even his appeal was positive.

"It means there's still faith in the institution, there's faith in a pope who is continuing the cleanup started by his predecessor as cardinal. And there's still trust in a faith that has at its heart the defence of victims and the protection of innocents," said the piece by Lucetta Scaraffia, one of L'Osservatore's main columnists and the editor of its monthly edition on women's issues.

She said the film wasn't anti-Catholic "because it manages to give voice to the shock and profound pain of the faithful when confronted with discovery of this horrible reality."

Vatican Radio, which gave the film an enthusiastically positive review in October when it screened at the Venice Film Festival, also praised "Spotlight" in its Oscar wrap as a "rigorous and authentic" reconstruction, and cited Sugar's appeal.

The reaction marks a dramatic turnabout by the Vatican from a decade ago and even as recently as 2010, when the last convulsion of the long-running scandal flared as thousands of new victims came forward in Europe, Latin America and beyond. Then, the Vatican paper of record was a vehicle for ringing defences of how the Holy See had responded and criticism for the "unjust attacks" being hurled against its pope.

Vatican praise for "Spotlight" reflects the generally positive reviews the film has had in Catholic circles: Just a few weeks ago, it was screened in the Vatican for members of Francis' sex abuse advisory commission. And the Rev. Tim Kesicki, president of the Jesuit Conference in the U.S., said he had recently invited his staff to see it at a Washington theatre. He said they left feeling "both moved and devastated."

"We were moved by the courage of those survivors who came forward and shared their truth, and we were devastated by the size and scope of the suffering," Kesicki told the AP in an email. "It is a painful story that has to be told."

The Oscar was handed out just hours after one of the most senior officials in the Vatican, Australian Cardinal George Pell, testified before Australia's Royal Commission, which is investigating the scope of the abuse scandal there. The public hearing is evidence that more than a decade after the church's coverup was exposed, some level of accountability is beginning to take hold.