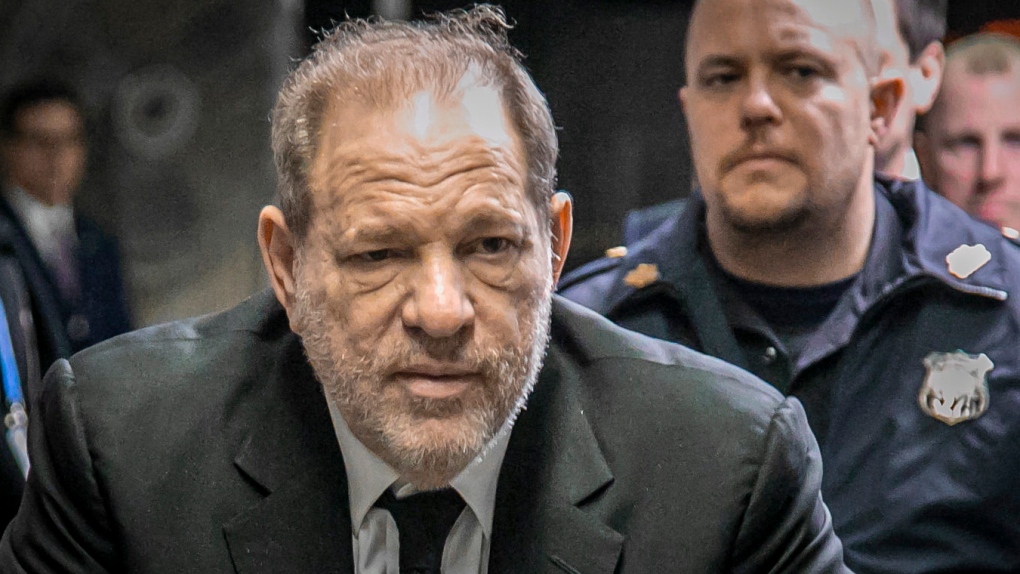 Harvey Weinstein leaves a Manhattan courthouse after a second day of jury selection for his trial on rape and sexual assault charges, Thursday, Jan. 16, 2020, in New York. (AP Photo/Bebeto Matthews)

NEW YORK -- A look at the charges against Harvey Weinstein and the punishment the former Hollywood producer could face if convicted at his New York City rape trial. A jury of seven men and five women started deliberating Tuesday in the closely watched #MeToo case. To convict or acquit Weinstein on any charge, their verdict must be unanimous.

WHAT IS HARVEY WEINSTEIN ACCUSED OF?

Scores of women have come forward in recent years to accuse Weinstein of sexual misconduct, but his New York trial is essentially built on three allegations:

The "Pulp Fiction" producer is charged with raping an aspiring actress in a New York City hotel room in 2013. He is accused of forcibly performing oral sex on another woman, production assistant Mimi Haleyi, at his apartment in 2006. And he is accused of raping "Sopranos" actress Annabella Sciorra in the mid-1990s at her apartment.

The verdict sheet the jury must fill out consists of five interlocking counts with a complex set of instructions that read like an income tax return. For example, it says that if you find the defendant not guilty on Count 1 with respect to Sciorra, then you must also find him not guilty on Count 3 and proceed to Counts 2, 4 and 5.

The Associated Press does not publish the names of alleged victims of sex crimes without their consent. It is withholding the name of the first rape accuser because it isn't clear whether she wishes to be identified publicly.

WHAT ARE THE CHARGES AGAINST HARVEY WEINSTEIN?

Five counts in all:

HOW DOES THE PREDATORY SEXUAL ASSAULT AGAINST HARVEY WEINSTEIN CHARGE WORK?

Under New York law, one way a person can be found guilty of predatory sexual assault is if he or she commits certain sex crimes against multiple victims, even if some of the conduct did not result in charges.

In Weinstein's case, prosecutors allege he raped Sciorra in late 1993 or early 1994 -- an accusation that is too old to be the basis for criminal charges on its own but can still be rolled into a predatory sexual assault charge.

DOES THE JURY HAVE TO REACH A VERDICT ON ALL CHARGES AGAINST HARVEY WEINSTEIN?

No. Weinstein is charged with five counts, but the way the verdict sheet is designed, jurors won't have to make a decision on all of them.

The form instructs the jury to start by reaching a verdict on the predatory sexual assault counts, which encompass the other charged acts. Depending on what they decide on those counts, they can move on to or skip other charges.

For example, if the jury finds Weinstein guilty of the predatory sexual assault count alleging he attacked both Sciorra and Haleyi, then it does not need to decide the separate criminal sex act charge involving Haleyi.

WHAT IS HARVEY WEINSTEIN'S DEFENCE?

Weinstein maintains the encounters were consensual. His lawyer said that the allegations are "regret renamed as rape." The defence grilled Haleyi and the 2013 accuser about sexual encounters they had with Weinstein after the alleged assaults and highlighted friendly, flirtatious emails they sent him.

HOW MUCH TIME COULD HARVEY WEINSTEIN FACE?

Each of the predatory sexual assault counts is punishable by 25 years to life in prison.

The first-degree rape and criminal sex act counts each carry a maximum of 25 years.

A conviction on the charge of predatory sexual assault. Even if the jury finds the 67-year-old Weinstein guilty on just one of those top-level counts, a minimum sentence would keep him in prison until he in his early 90s.

WOULD HARVEY WEINSTEIN HAVE TO REGISTER AS A SEX OFFENDER?

Yes. If Weinstein is convicted on any of the charges, he will be required to register as a sex offender under New York's version of what's known as Megan's Law.

WOULD HARVEY WEINSTEIN BE HAULED OFF IN HANDCUFFS RIGHT AWAY?

If Weinstein is convicted on any of the charges, there's a good chance his bail will be revoked and he will be taken to jail right away.

Prosecutors could argue he will have extra incentive to flee and that he is rich enough to do it. Even before the trial, prosecutors said he was showing signs of restlessness. A judge raised his bail in December after prosecutors accused him of fiddling with his electronic monitoring bracelet.

WHAT'S NEXT FOR HARVEY WEINSTEIN?

Win or lose, Weinstein faces more criminal charges in a Los Angeles case announced last month. He is accused of sexually assaulting one woman and raping another on back-to-back nights just before the Oscars in 2013.