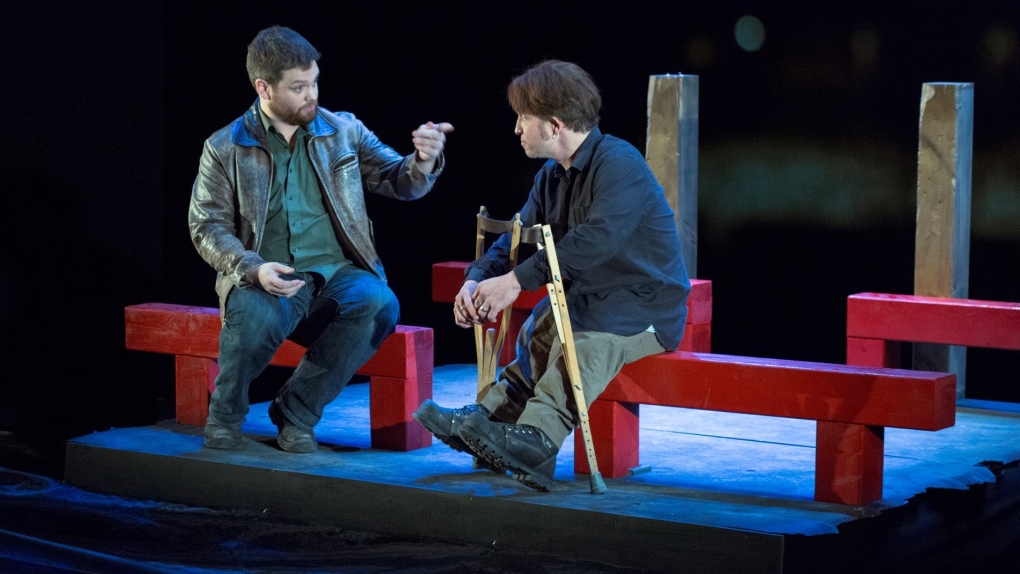 Actors Pat Dempsey (left) and Paul David Power are shown in a scene from the play "Crippled." (THE CANADIAN PRESS/HO-Power Productions)

ST. JOHN'S, N.L. -- A Newfoundland playwright says his failed two-year battle for a visa to perform in the United States speaks to the barriers facing independent artists telling diverse stories.

Despite providing formal requests from the theatre company and recommendations from Canadian artists and scholars attesting to the play's attributes, authorities said the application failed to prove its "cultural uniqueness."

Power, the play's writer and star, said the decision shows a lack of understanding about the rarity of seeing complex stories about disability presented on stage.

"I feel the dots just aren't being connected of why this would be culturally unique and I think it's a lack of understanding of disability," Power said.

"It seems like a lot of bureaucratic barriers that shouldn't be there."

Power was first invited to bring "Crippled" to San Francisco in 2017 after Exit Theater's artistic director saw the work at a New Brunswick festival.

Procuring a visa to make the trip happen, however, turned out to be more complicated than anticipated.

Power said he and his small company of five people were limited in their options and chose to apply under the classification of cultural uniqueness.

"Crippled" is based on Power's experiences growing up with a physical disability in rural Newfoundland and later St. John's. The story also explores Power's grief after the death of his long-term partner.

The play has been well-received by critics and audiences and made accessibility a key aspect of the performance, providing American sign language interpretation and audio description.

But officials said the materials did not prove to be of cultural uniqueness or benefit for the U.S., and suggested the quoted experts, representing organizations like the Canada Council for the Arts, had not proven their expertise in the area.

The rejection letter also said the U.S. theatre companies hoping to host "Crippled" had not submitted appropriate materials proving all the performances would be "culturally unique events."

Power said the next step is to appeal the decision, and there is growing support from arts communities in Canada and the U.S.

Exit Theater launched an online petition, proposing a policy allowing theatre artists into the United States to perform for up to 30 days per year.

"It is virtually impossible for indie theatre artists from another country to perform legally in the United States," the petition read.

"The immigration policy for artists is unduly restrictive, does not protect the security of the U.S., and impedes international cultural exchange."

Power said he hopes the situation highlights the difficulty low-budget Canadian artists have sharing their work with wider audiences.

And putting aside his play's themes and representation of life with a disability, Power said he is most frustrated that he and his colleagues have had to jump through bureaucratic hoops to prove "Crippled" is a high-quality work of art that deserves to be seen.

"The driving force behind the invitation by Exit Theater was, it's a wonderful piece of theatre that they wanted as part of their season," he said.

"It's not a disabled actor trying to make his way. It's a really high-quality, good play, and we have the reviews and public feedback about it," Power said. "It should be about the art form."