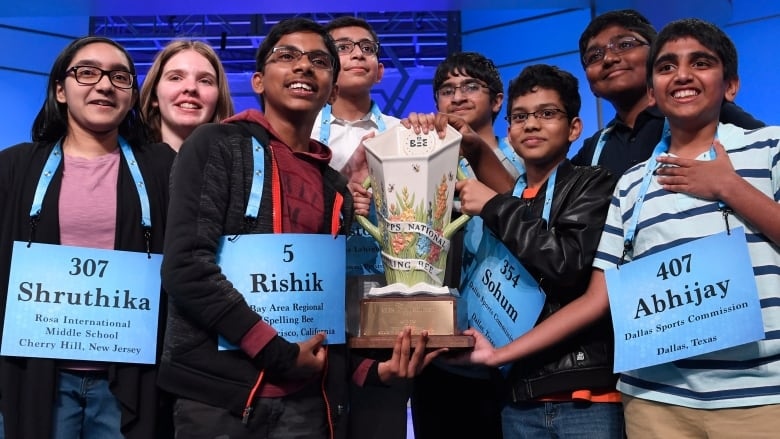 Six months after the bee ended in an unprecedented eight-way tie because organizers ran out of words that were difficult enough to trip up the best spellers, Scripps on Tuesday announced the first in a series of reforms to the competition. While bee organizers aren't saying how they'll come up with a more challenging word list, the bee is reducing the number of wild-card entrants, which ought to streamline an event that was becoming unwieldy.

The bee will have roughly 140 wild-card entrants, down from nearly 300 this year. That means the competition would top out at about 400 spellers. This year, there were 562 kids in the bee, which is open to students through the eighth grade.

And unlike in previous years, wild cards will be available only to seventh- and eighth-graders. There were dozens of first-timers and younger spellers among this year's wild cards, and current and former spellers said they were concerned the program had strayed from its intended purpose and was letting in nearly anyone able to pay the $1,500 entry fee, plus travel, lodging and expenses. Spellers who qualify via the traditional route, by winning a regional bee, have their trip to nationals paid for by sponsors.

There were 17 wild cards age 9 or younger this year, and none survived to join the 50 spellers who made the finals. The preliminary rounds featured wild-card spellers who were clearly overwhelmed by such words as "tendon," "vestibule," "allocation" and "gyro."

Fourteen-year-old Simone Kaplan of Davie, Florida, who just missed being part of the octet of champions in this year's bee, said she noticed the struggles of some younger wild-card spellers.

"The change gives the students in sixth grade and below who don't win their district bees more chances to hone their skills for next year," said the eighth-grader, who is hoping to return for her fourth bee. "I think that making the bee smaller is also going to make it more competitive, so yes, I think it is a good thing."

Paige Kimble, the bee's executive director, told The Associated Press ahead of the announcement that older kids ought to be the focus of the wild-card program because they are running out of chances to make the bee. She said Scripps will take into account applicants' performances in past bees and the difficulty of their regions.

Scripps also announced a financial aid package for spellers who apply through the wild-card program, known as "RSVBee." The bee will cover the entry fees and expenses of up to 18 wild-card spellers who qualify for free or reduced-price school lunches, a common measure of poverty.

"We have always been sensitive to the financial need aspect of RSVBee," Kimble said. "We look forward to helping spellers and their families who are in need make it to the national stage."

The wild-card program began with the 2018 bee in a bid to give opportunities to kids who live in highly competitive regions or in areas without sponsored bees, and it paid off immediately when Karthik Nemmani, a wild card from the Dallas area, won the bee. Dallas and Houston are home to some of the strongest fields of spellers at the regional level, and Karthik had lost his county bee to the girl he ended up defeating for the national title.

None of this year's eight champions was a wild card.

The bee did not announce any further changes to the structure or rules of the competition. The rules are generally shared with the spellers about a month before the bee, which is held the last week in May at a convention centre outside Washington and televised by ESPN. Spellers will be eager to know whether Scripps decides to bring back a written tiebreaker test, which was added to the competition after three consecutive ties. The test was unpopular and didn't prove necessary in 2017 or 2018, so Scripps got rid of it. Then it ended up with eight champs.

As for the word list, its creation is a yearlong process, the details of which Scripps has always kept secret. Kimble would only say that the process is on schedule. But she maintains that the eight-way tie did not reflect poorly on the bee.

"We will present a competition that is challenging and that also honours the achievement of these spellers who have worked so very hard to master the ins and outs of the English language," Kimble said. "Our focus more than anything else is on celebrating that achievement."