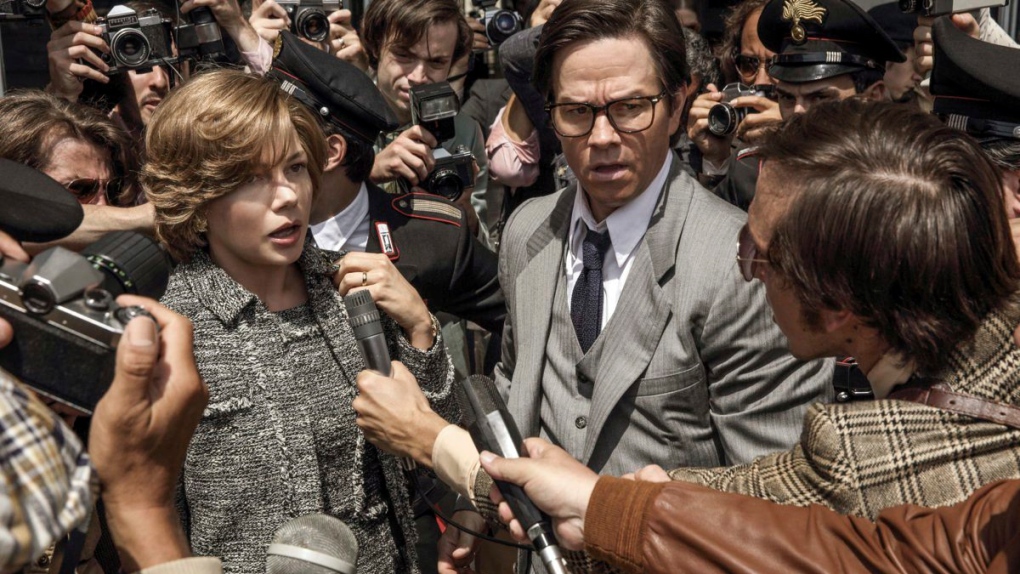 FILE - This image released by Sony Pictures shows Michelle Williams, left, and Mark Wahlberg in TriStar Pictures' "All The Money in the World." (Fabio Lovino/Sony-TriStar Pictures via AP)

TORONTO -- As headlines swirl over pay disparities in Hollywood, a sharable Google Doc has been making the rounds in the screen industry, encouraging TV writers, executives and assistants to anonymously reveal their wages.

The high-powered sexual misconduct defence initiative Time's Up has worked to shine a light on pay inequality, and the reshoots for the Ridley Scott film "All the Money in the World" exposed how the issue can affect even A-listers.

Earlier this month, word spread over a significant pay disparity between actors Mark Wahlberg and Michelle Williams for the last-minute reshoots to help scrub Kevin Spacey from "All the Money in the World." Wahlberg later agreed to donate the US$1.5 million he made for the reshoots to Time's Up -- Williams was reportedly paid less than $1,000.

But the pay gap issue is also one that is felt in Canada, says Elvira Kurt, a Canadian comedian, actress and screenwriter.

"Just because the document is in the Hollywood Reporter and it's about Hollywood, it doesn't mean that we're immune to it up here," Kurt said.

Sections in the spreadsheet being shared online include "staffed writers," "assistants," "TV executives," and "pilot quotes." As of Wednesday afternoon, there were over 100 entries under "staffed writers," and it appeared the networks/studios listed were all American.

It was unclear who created the spreadsheet and participants were not asked to reveal their names.

"Note to all reading: yes, people in industry are fully aware that experience, leverage, etc etc factor into pay -- this is still helpful to many of us to cross check studio/network we're at," said a note in the "rules" section of the document.

J. Miles Dale, the Toronto producer behind 13-time Oscar nominee "The Shape of Water," applauded the intentions behind the document.

"It's great that everything is coming to light and before you can fix it, you have to bring it to light," said Dale.

"Now I feel like that is on the road to being addressed solidly and it's going to be much harder for anybody to get away with it and harder and harder every day. So good for the people who are trumpeting it. I feel like it's incumbent on executives, agents, attorneys, anyone who's advocating, frankly, for either side to recognize the importance of it."

Kurt said the shared document "is just backing up what we all know anecdotally, not just from the bigger cases but just what you rationalize to yourself about what you're making, or what your experience even is."

But it does help raise awareness, she added.

"The significance of this is seeing the starkness of it, just how pervasive it is," she said.

"When it's just anecdotal, then it may be easier to rationalize.... There's no escaping it when you're looking at the evidence.... It makes it harder to look away, to not realize how pervasive it is, and your own personal complicity.

"For me in the low-power position, it represents just how big the mountain is. When you're climbing it, all you can see is what's in front of you. A document like this is suddenly like, 'Oh my god, this is Everest."'