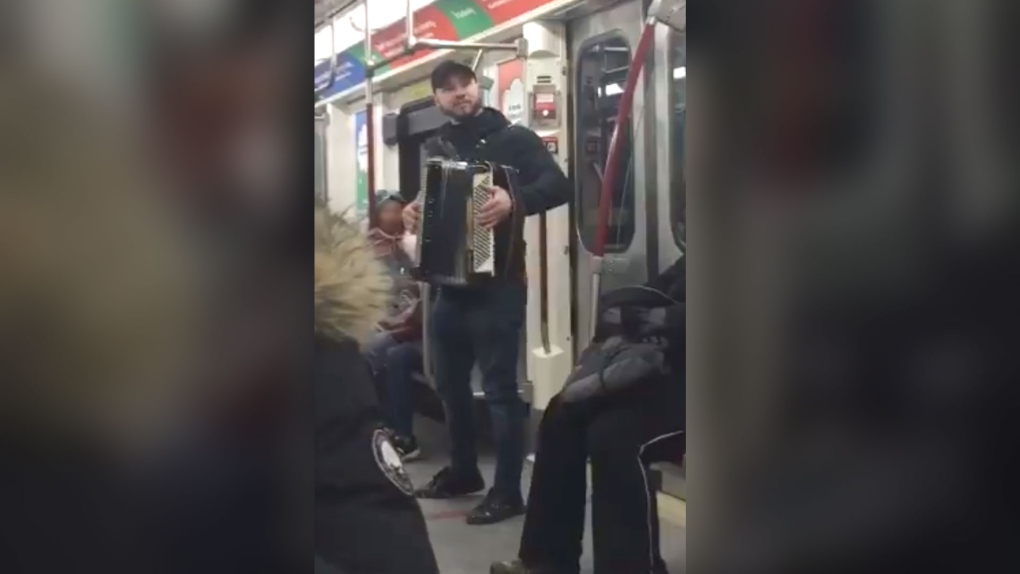 A busker is seen on a subway car in Toronto in this image taken from video. (Source: @Local_Ginger/Twitter)

TORONTO -- Two accordion players who have entertained and annoyed Toronto subway riders with their performances of the hit song "Despacito" have learned a new tune, but the city's transit agency says the men are still breaking the law.

The pair, whose performances on subway cars have circulated online in recent weeks, had been warned to stop or risk being fined as busking on trains isn't allowed.

A video posted online this week now shows them playing a different song on the subway.

The Toronto Transit Commission says it understands the men, believed to be brothers, are mixing up their set list.

But spokesman Stuart Green says that doesn't make what they're doing any more acceptable than when they were "subjecting our customers to that other musical abomination."

Green says as of Thursday, the men have been issued one ticket with a set fine of $235 and two summonses compelling them to appear before a justice of the peace for a penalty.

He says the transit agency realizes the pair have their supporters and critics, but notes the bottom line is that their actions are against TTC bylaws and must stop.

"Not only is it disruptive to the expectation our customers have for a relatively peaceful ride, it can prevent those with sight loss, and who may rely on the audible stop announcements, from navigating the subway system," Green said Thursday.

He said there is a legal way for musicians to perform on TTC property through the Underground Sounds program, but even then, "performing on vehicles is not permitted."

He said if they continue, the TTC will escalate to what is called a Part 3 summons, which can carry increased fines and probation with conditions.

The first summons hearing is June 1, the second is scheduled for July 20, Green said.

"Despacito," by Luis Fonsi, featuring Daddy Yankee, became the most viewed clip of all-time on YouTube last summer and the most-streamed track of all-time. However, the record-breaking video did not feature vocals by Canadian pop star Justin Bieber that appeared on a remix.

The subway accordion bros are back #TTC pic.twitter.com/FiaLvsHk2D