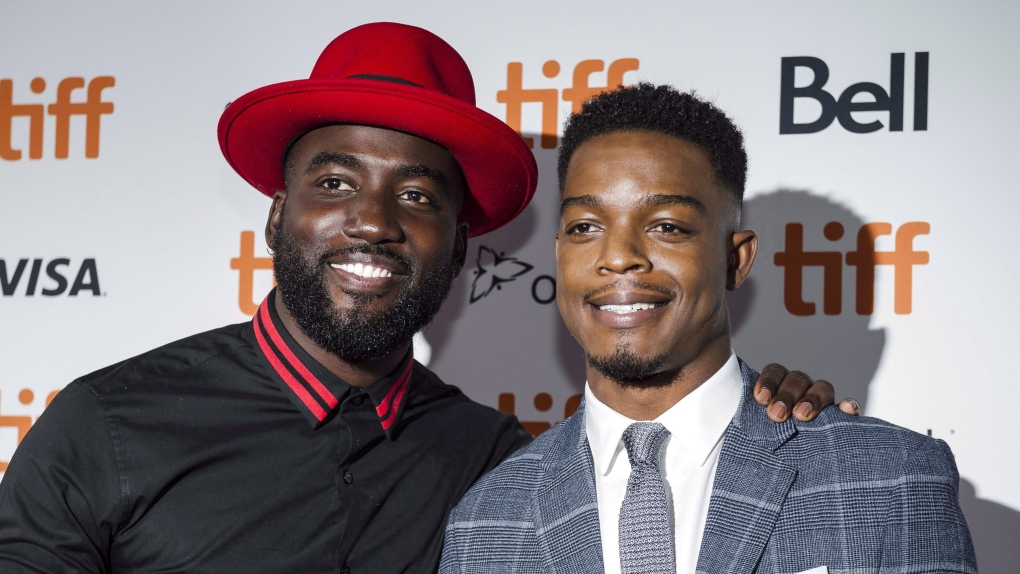 Actors Shamier Anderson (left) and Stephan James arrive ahead of the screening of "Homecoming" during the Toronto International Film Festival in Toronto, on Friday, September 7, 2018. THE CANADIAN PRESS/Christopher Katsarov

TORONTO -- Rising Hollywood stars Shamier Anderson and Stephan James admit it's early in their burgeoning careers, but they feel a responsibility to inspire and support a new generation of Canadian talent.

It's why the Toronto brothers say they return home regularly to promote homegrown artists, chiefly through their annual campaign the B.L.A.C.K. Ball, which this year is partnering with the Toronto International Film Festival for a star-studded bash Monday.

They're also fitting ambassadors for a promotional campaign dubbed "Made," or "Nous" in French -- an industry-backed initiative to celebrate Canadians working in film, television and digital entertainment here and abroad. A 30-second trailer touting domestic actors and actresses, directors, and film crews is screening ahead of all TIFF gala and special presentation screenings.

"We're moving in a direction in Canada where we hope that we don't have to leave the country to get success (but) that's kind of where we're at right now," says Anderson, whose growing list of credits includes Space's "Wynonna Earp" and last year's Nicole Kidman crime feature, "Destroyer."

The 25-year-old James cut his teeth on Canadian youth TV including "Degrassi: The Next Generation," "How to be Indie," and "My Babysitter's a Vampire," but is now poised to enter the Hollywood's elite thanks to breakthrough roles on the Amazon Prime Video thriller "Homecoming," the civil rights film "Selma," and a starring turn in last year's period drama "If Beale Street Could Talk," which netted an Oscar win for supporting actress Regina King.

He's currently in production on the second season of "Homecoming," and hits the big screen this fall with the crime drama "21 Bridges" -- as a villain opposite Chadwick Boseman, J.K. Simmons, and fellow Canuck Taylor Kitsch.

"I'm excited for people to see me in something that's different and cool," James says of "21 Bridges." "(It's) definitely taking a darker turn than what most people might be used to from me."

The 28-year-old Anderson, meanwhile, is currently filming the Netflix movie "Awake" opposite Gina Rodriguez, and earlier this year shot roles on the third season of "Goliath" opposite Billy Bob Thornton, the Spike Lee-produced film "Son of the South" opposite Lucas Till, and the space feature "Stowaway" with Anna Kendrick, Toni Collette and Daniel Dae Kim.

James says he and his brother are blessed to be busy, but are also mindful of the types of roles they play.

"It means a lot to the both of us to play diverse characters, to tell interesting, varied stories -- stories that aren't just African-Canadian-based or African-American-based, but really play colourless roles," says James.

"I don't think me or my brother have any limits as far as the types of characters or the types of stories that we want to tell on screen."

And so the brothers created the annual B.L.A.C.K. Ball four years ago to encourage varied opportunities for talented newcomers, especially those from marginalized communities that otherwise don't see themselves represented onscreen. Anderson says B.L.A.C.K. is an acronym for Building a Legacy in Acting, Cinema and Knowledge.

"Growing up, we never really had too many examples of actors that looked like us, who came from where we came from," adds James, raised by a single mother from Jamaica.

But as the younger of the two brothers, James says he didn't have far to look for inspiration in his own career, crediting Anderson with paving that road for him.

"He made me believe that it was possible. I think that he showed that this is something realistic, that you can go and you could chase this sort of thing, that you can pursue the arts in this way," he says.

"Luckily our mother was very supportive of us. But really it was seeing him doing what he did and knowing that I could be fearless in stepping into it myself."