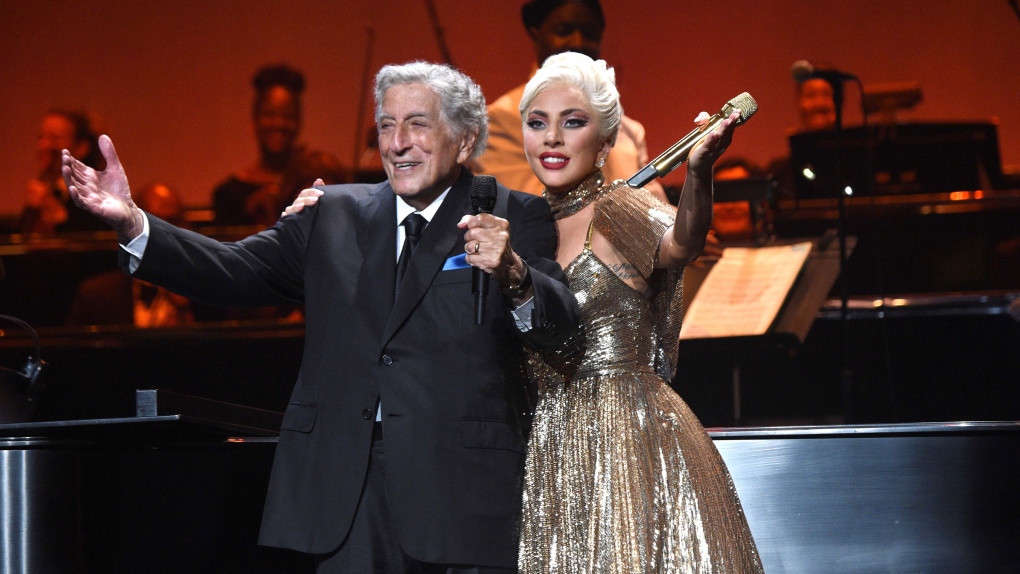 Tony Bennett won over generations of fans crooning "I Left My Heart in San Francisco." And on his 95th birthday, the beloved singer left his heart on the stage of Radio City Music Hall.

Six months after Bennett and his family revealed he is suffering from Alzheimer's, Bennett sang alongside Lady Gaga before sold-out crowds in a two-concert series in early August billed as his final New York performances.

Now the rest of the world has a chance to take in the moving August 3 show in a TV special, "One Last Time: An Evening With Tony Bennett and Lady Gaga," which aired Sunday on CBS.

In addition to his signature song, Bennett performed standards like "Fly Me to the Moon" and "Steppin' Out With My Baby" and duets with Lady Gaga including "Love For Sale" and "Anything Goes."

His family members have said sometimes Bennett doesn't know where he is and what is happening around him. But onstage in the TV special, the legendary performer didn't miss a beat.

Belting out "New York, New York" before Bennett took the stage, Lady Gaga teared up when she paused to talk about him.

"He's my friend. He's my musical companion. And he's the greatest singer in the whole world. And I'm counting on you, New York, to make him smile. So you better cheer. You better yell. You better laugh. You better cry. You better give your soul."

The Radio City Music Hall audience held up its end of the bargain. Bennett got his first standing ovation before even singing a note -- and racked up at least a dozen more throughout the night.

In "Fly Me to the Moon," when he crooned the line, "Let me sing forever more," the audience erupted in cheers. At one point the camera panned to an audience member shouting, "We love you!"

Bennett, whose singing career spans eight decades, is no stranger to performing for throngs of adoring fans. Still, before the concert, family members told "60 Minutes" they weren't sure what would happen during the show.

But wife Susan Benedetto said that once she saw him onstage that night, his eyes twinkling and arms outstretched toward the crowd, she knew everything would be alright.

"He became himself. He just turned on. It was like a light switch," she told "60 Minutes" in a segment that aired last month.

That's because music and performing are so ingrained in the singer, according to Bennett's neurologist, Dr. Gayatri Devi.

"People respond differently based on their strengths. In Tony's case, it's his musical memory his ability to be a performer. Those are an innate and hardwired part of his brain," Devi said on "60 Minutes." "So even though he doesn't know what the day might be, or where his apartment is, he still can sing the whole repertoire of the American Songbook and move people."

After the nominations, Lady Gaga told BBC Radio 2's "The Zoe Ball Breakfast Show" that it's been heartbreaking to watch what Bennett is going through. She told "60 Minutes" that Bennett had been calling her "Sweetheart" every time she'd seen him since the pandemic began, and she wasn't sure he knew who she was.

But when she came onstage to join him during the Radio City Music Hall concert, Bennett appeared to have no doubt. "Wow," he said as she twirled around in a shimmering gold gown. "Lady Gaga!"

A look of joy flashed across Lady Gaga's face. She bent over, her head in her hands, before doing another twirl.

"I had to keep it together, because we had a sold-out show and I had a job to do," Lady Gaga told "60 Minutes." "But I'll tell you, when I walked out on that stage, and he said, 'Lady Gaga,' my friend saw me, and it was very special."

"This was a hard decision for us to make, as he is a capable performer. This is, however, doctors' orders," Danny Bennett said. "It's not the singing aspect but, rather, the traveling. Look, he gets tired. The decision is being made that doing concerts now is just too much for him."

"It's not a sad story. It's emotional. It's hard to watch somebody change. I think what's been beautiful about this, and what's been challenging, is to see how it affects him in some ways, but to see how it doesn't affect his talent," she said. "I think he really pushed through something to give the world the gift of knowing that things can change, and you can still be magnificent."