So as news spread of Appleby's death on Thursday from an accident during a special effects test for the series "Titans," it seemed a particularly tragic twist of fate for someone who was well known for safety as well as his humour, leadership and quiet confidence on set.

"This is just the worst fear of what we do," Dale -- the Oscar-winning producer of "The Shape of Water" who worked with Appleby on many projects stemming back to the 1994 series "RoboCop" -- said Friday in a phone interview from Los Angeles. 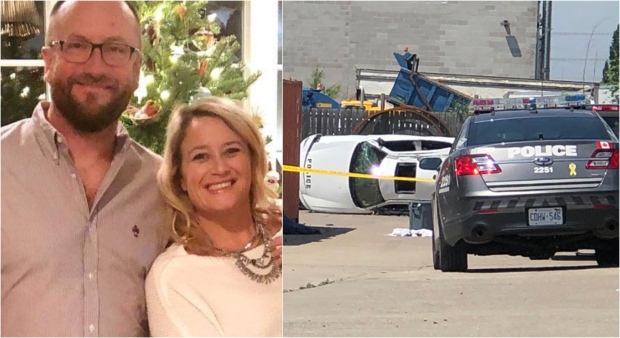 "But he would deliver. The gags were good and it was safe. There would be times where we'd be doing something and it would be '3, 2, 1' and he'd go, 'Abort, abort -- stop, stop, stop.' He would have seen something that one of us didn't see, whether it was an instinct or something. There's that fine line between making it great and making sure it's safe, and as far as I remember, ironically, nobody has ever really been hurt on one of his sets."

Toronto police said Appleby died en route to hospital after equipment exploded at a west-end special effects facility and he was hit by metal from the blast.

Warner Bros. Television Group said it happened during the preparation and testing for an upcoming "Titans" shoot. The company planned to shut down production for two days.

The Ministry of Labour said they were investigating the incident.

Warner Bros., along with "Titans" executive producers and DC Universe, said they were "heartbroken and devastated" by Appleby's death.

"Warren is beloved by all who worked with him during an impressive 25-year career in television and motion pictures," they said a joint statement.

"The executive producers, along with everyone in the 'Titans' family, Warner Bros. and DC Universe, wish to express our deepest condolences, and heartfelt love and support, to Warren's family and friends at this most difficult time."

Toronto-based special effects company Acme FX, where Appleby was a partner, said he'll "be remembered for his quick humour, strong leadership, care and compassion for his crew and -- above all else -- his devotion to his family."

Tributes also poured in on social media for the husband and father of two young boys, who had a prolific career in film and TV, with other recent credits including the series "The Strain" and the films "It," "It Chapter Two" and "The Shape of Water."

"Stunt effects guys tend to be cocky and macho and he wasn't that, so he kind of broke the mould," Dale said.

"The whole 'Go big or go home' macho thing that those guys tended to do, he lived it but he wasn't arrogant or braggy about it. He was just a guy who was a great leader. These guys just loved him so much because he didn't take all the credit either."

Those who witnessed Thursday's tragedy are "traumatized having seen what they saw," Dale added.

"He was a great leader ... and had the experience and the confidence and safety and the spidey sense and the sense of humour," he said.

"To think if he was standing six inches one way or the another, we wouldn't be talking today. It's the arbitrariness of that that gets me."

I am beyond sadness to hear of the passing of my colleague Warren Appleby this morning. My heart goes out to his friends and family. Warren was an amazing, generous, talented man. His enthusiastic passion will be missed. I miss you, my friend.

Overwhelming loss and grief for the tragic passing of Warren Appleby today. Father, husband, son, brother, friend, IATSE873 board member, ACME FX partner - a vital member of the Toronto film industry, he will be sorely missed.

Deepest condolences to the family of film and TV special effects veteran Warren Appleby and to his industry family as well. A real tragedy and a huge loss for our proud and excellent production industry.