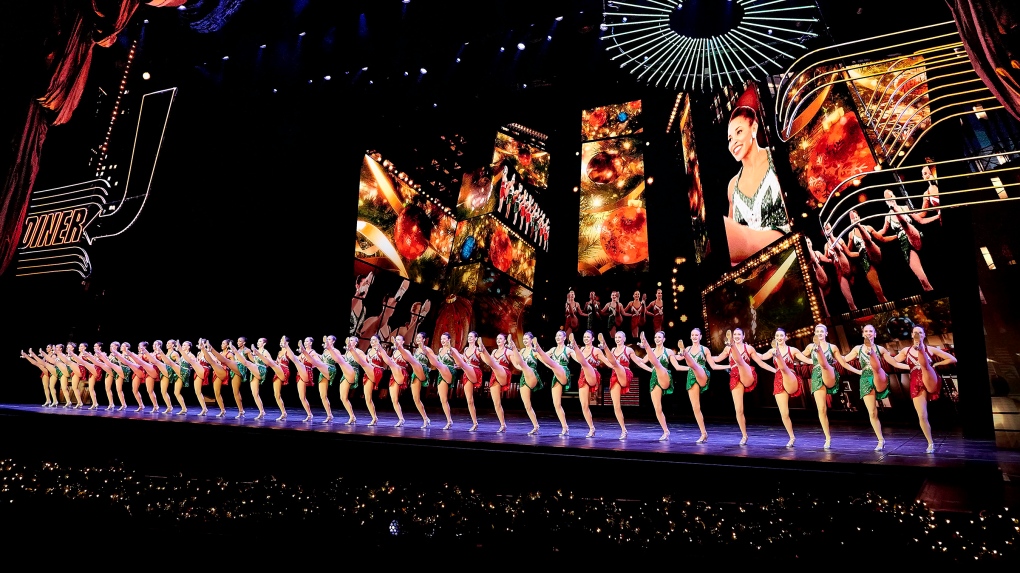 According to the Rockettes, the Christmas Spectacular has been seen by more than 75 million people since the show’s inception in the 1930s. (Courtesy MSG)

TORONTO -- A trip to New York City in 2005 to see the annual Radio City Christmas Spectacular starring the Rockettes is what encouraged Alison Jantzie to audition for the iconic dance troupe.

But it wasn't just the high kicks and holiday cheer that inspired the Alberta-based dancer. Her sister Kristin Jantzie was dancing in the cast.

"To see your family member up there on stage is completely overwhelming," Alison said in a telephone interview with CTVNews.ca. "I remember sitting in the audience just being so proud… Being someone I had idolized for my whole life, seeing her achieve a dream like that was so inspiring."

The Rockettes are a world-famous American chorus line best known for performing in the Radio City Christmas Spectacular. Those who haven't made it to New York City to see the show may recognize the long-legged dancers from their appearances on television and in films such as "Annie," "Saturday Night Live" and "The Tonight Show Starring Jimmy Fallon."

Alison has spent nine seasons as a Rockette and while Kristin is now attending university, Alison still shares the stage with her other sister, Lisa.

"Being able to share this experience with my family members, that's really lucky," Lisa Jantzie said in a telephone interview with CTVNews.ca.

Performing in the Christmas Spectacular is a "family affair" for the Jantzies, but that isn’t the case for other dancers in the company.

"The first word that comes to my mind about Christmas is family, and as a Rockette we don't actually always get to be with our families, especially being Canadian," said 23-year-old Torontonian Aly McKenzie in a telephone interview with CTVNews.ca. This is her fourth season as a Rockette.

This year there are six Canadian dancers among the Rockettes.

But despite the distance, some of the Canadian dancers say their fellow Rockettes have become a second family to share the holidays with.

"The other Rockettes I get to perform with every day -- we work, sweat, cry [and] share everything together so they really become another part of your family," said McKenzie. "Everything we get to experience together is the most special part of the Christmas season."

WORKING AS A TEAM

Auditioning for the Rockettes is a two day process, with dancers demonstrating their proficiency in ballet, jazz and tap. Approximately 500 hopefuls arrive on day one, with a select group invited back 24 hours later. Veteran Rockettes must re-audition each year.

The 80 dancers selected are split into two casts and perform up to 16 shows a week. Leading up to opening night, the Rockettes rehearse six hours a day, six days a week, for six weeks.

"The Rockettes rehearsal process is intense, like any other athlete," said Rockettes Creative Director Karen Keeler in an email statement to CTVNews.ca.

"In addition to the time commitment, there is intense focus, hard work, commitment and dedication that goes into every minute," she said. "The level at which the Rockettes execute choreography is unlike any other dance company in the world. The technique, precision, consistency, strength, grace and teamwork are unparalleled, and that is what defines the work ethic of every single Rockette."

Despite the hard work, first-year Edmonton Rockette Mackenzie Howse is reluctant to call it a job.

"It's an absolute honour to be a part of such a strong group of independent women. I still wake up and sometimes have to pinch myself because at times it doesn't feel real and I have to remind myself that I'm a Rockette," Howse said in a telephone interview with CTVNews.ca.

Howse says being a Rockette has given her new Christmas traditions including being involved in other families' holiday celebrations.

"Every time I'm up on that stage, I'm trying to spread that cheer and spirit to make it incredible for everyone in the audience," said Howse.

The Radio City Christmas Spectacular runs until Jan. 5. Tickets start at US$45 and can be purchased online or at the box office.

According to the Rockettes, the Christmas Spectacular has been seen by more than 75 million people since the show's inception in the 1930s.

THE LEGACY OF THE ROCKETTES

Being a Rockette is more than just seasonal work -- for some of the dancers, it means upholding New York City's time-honoured Christmas tradition.

"In New York, everything is bigger, the theatre is huge, we have these glamorous costumes, we're doing these numbers, some are brand new… and there's one number that's been in the show since 1933, so it's what everyone knows," said Lisa Jantzie who is in her seventh season as a Rockette. "Being a part of that legacy is really special."

The Rockettes are the longest-running precision dance company in the U.S. with more than 10,000 women having shared in the legacy.

Originally known as the "Missouri Rockets," the troupe performed its first show in St. Louis in 1925 before moving to Radio City Music Hall in 1932.

The Rockettes have participated in hundreds of shows and historic events including joining the United Service Organizations to entertain troops during the Second World War and performing annually in the Macy's Thanksgiving Day Parade. However, it's the company's Christmas Spectacular that has since become synonymous with New York and the holidays.

"[Being a Rockette] has a legacy behind it and I feel like I'm getting the opportunity to teach and inspire other young dancers to continue that legacy for when it comes to their time to audition," said Howse who teaches at Canada's National Ballet School when she's back in Toronto. "To bring that to Canada is so special to me."

For Katie Forss, a third-year Rockette from Edmonton, she says the Rockette legacy lasts because of the values held by her fellow dancers.

"All of the women throughout the company's history have passed down respect and love, and without that within the company, we can't be what we are outside of the company to the world," Forss said in a telephone interview with CTVNews.ca.

"The other women are the most incredible aspect of this show. It's such a supportive sisterhood, it truly is like a second family," she said.