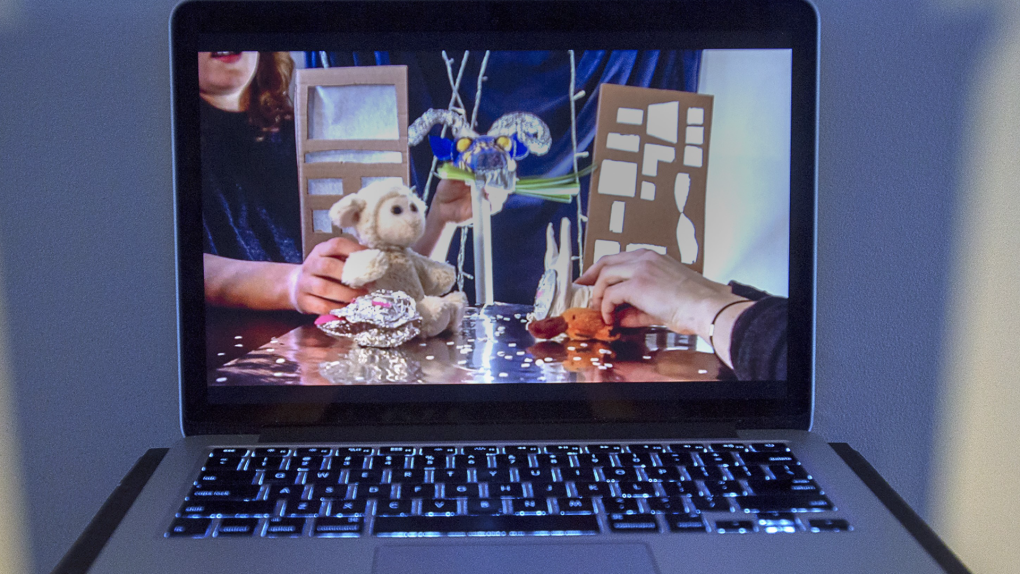 A scene from a short play, performed by members of a local theatre group and shared online during the COVID-19, is displayed in Halifax on Thursday, March 26, 2020. (THE CANADIAN PRESS/Andrew Vaughan)

HALIFAX -- The online theatrical piece starts in a faraway forest, moves across a parched desert, roiling seas and towering mountains before ending with a savage battle involving a furry beast. Not bad for a production that spans five minutes.

The video, titled "The Big Little Adventures of Beebee and Russel," is one of 18 short plays recently adapted for small screens by theatrical writers, directors and actors from across Canada -- all of them forced into isolation by the COVID-19 pandemic.

The brief videos in the Isolate Nights series, produced over five days earlier this month, were released Saturday on the Villains Theatre website.

"We wanted to do it on a quick timeline because a lot of people had just lost their theatre contracts and were grappling with that first wave of: 'What do we do now?"' said Colleen MacIsaac, artistic producer of the Halifax-based non-profit theatre company.

"Across all of the art forms, people are trying to figure out ways to help each other .... Theatre is such a gig-based economy."

Given the tight deadline and the fact that most of the 70 participating actors and directors were stuck in their homes, the resulting two-hour compilation of new work reflects remarkable ingenuity.

"The Big Little Adventures of Beebee and Russel," for example, features two stuffed animals -- Beebee the bear and Russel the platypus -- who begin their epic adventure in a forest made from stacked canned goods.

The ocean is a blue blanket, the mountains are piles of books and the evil beast is Bjorne, a piebald house cat.

After Bjorne is vanquished by the "spray gun of redemption," we see two of the four creators giving us the thumbs up before a final message appears: "Sending love from isolation."

Most of the pieces are full of fun and mischief, some are just bizarre -- but they all share the same theme: connection. "It really is indicative of a tendency toward hope and joy and finding humour in dark times," MacIsaac said. "That's something we all need right now."

One of the works, "Perdita" by Brandon Lorimer, shows six characters in limbo on a Zoom video-conference call. Satan makes a cameo appearance. "Stoop" by Dan Bray features actor Susan Coyne talking to her neighbour -- with appropriate social distancing at the doorstep -- about an insidious plot by another neighbour to smear nearby homes with dog poop.

"What kind of sick person would do that?" Coyne asks as her out-of-frame pooch silently defecates at her feet -- twice. And then there's "The Virtual Remedy," by Jesse Harley, a video blog from a lonely man seeking a first date after growing up in a bunker that shielded him from a nuclear war.

Despite the unsettling subject -- and the obvious parallels to the COVID-19 crisis -- the ending contains a hilarious twist.

"People have been really excited by the idea, and we've gotten a lot of feedback from those who were happy to see the plays, " says MacIsaac, adding that one of the plays was produced in Australia.

To help artists who have lost work to the pandemic, the website includes a donate button, and all of the proceeds go to the participating artists.

"This is one way of many that will spring up over the coming months for artists who have been impacted by the global COVID-19 pandemic to get together and create," the theatre company's website says.

"For those in live art forms that rely on people being able to be in the same room, the current state of the world has made it near-impossible to practise our art. So, we are finding new ways."

This report by The Canadian Press was first published March 27, 2020.