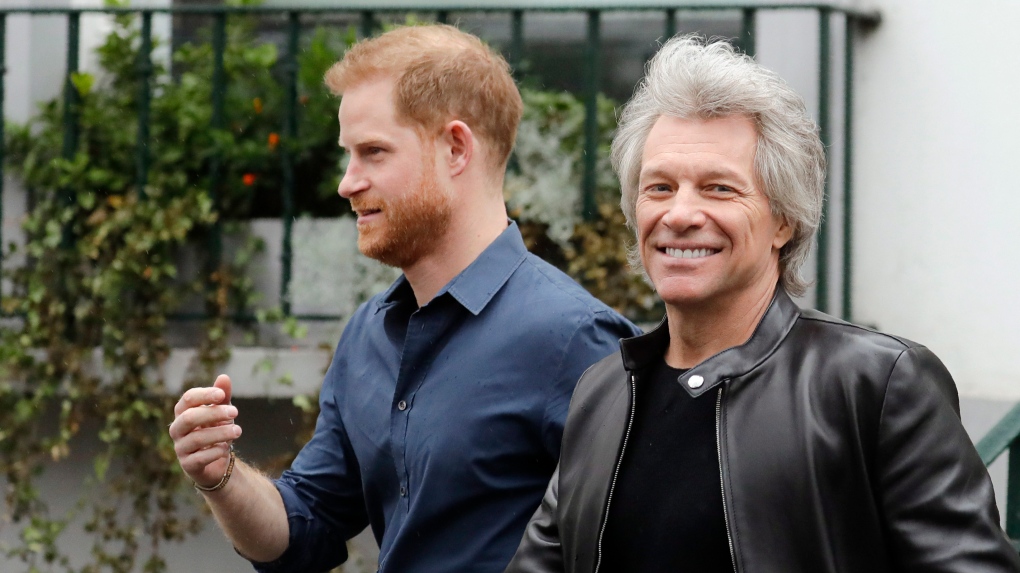 Britain's Prince Harry, the Duke of Sussex, left, smiles while walking along with musician Jon Bon Jovi as he leaves Abbey Road Studios in London, Friday, Feb. 28, 2020. The Prince met musician Jon Bon Jovi and members of the Invictus Games Choir, who are recording a special single in aid of the Invictus Games Foundation. (AP Photo/Kirsty Wigglesworth)

LONDON -- Prince Harry joined Jon Bon Jovi at Abbey Road Studios in London on Friday as the singer recorded a charity single to support the foundation that oversees the Invictus Games -- a multinational sports event for sick and injured servicemen.

The prince and the popstar greeted each other at the studio where the Beatles recorded a string of iconic albums.

Bon Jovi was re-recording his 2019 single "Unbroken" in aid of the foundation that oversees the sporting event founded by Harry. The song was created to shine a spotlight on veterans living with post-traumatic stress disorder.

The pair were seen in a recording booth wearing headphones. Bon Jovi had a guitar.

"We've been gargling next door, so we're ready to go," Harry told an engineer.

The event is one of the last official engagements being undertaken by Prince Harry, who has announced he is stepping back from royal duties next month.