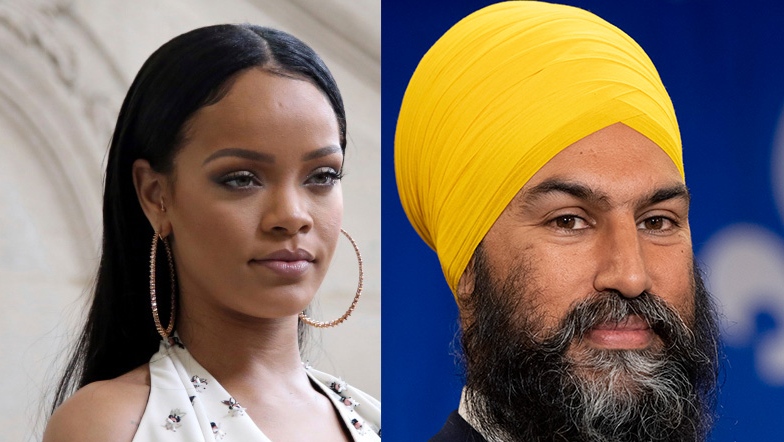 On the left of this composite image is singer Rihanna at Christian Dior's Spring-Summer 2017 in Paris in a Sept. 30, 2016 file photo (AP Photo/Thibault Camus, File); on the right is NDP leader Jagmeet Singh seen during a campaign speech in Sherbrooke, Que. on Sunday, September 15, 2019. (THE CANADIAN PRESS/Adrian Wyld)

As of Thursday, NDP Leader Jagmeet Singh can count RiRi as being under his umbrella of fans on Instagram – and it should be noted that the singer first followed Liberal Leader Justin Trudeau several years ago. On the social media platform, Rihanna boasts 75 million fans while only following 1,406 people, so pouring it up is the least Singh could do.

With only a few short weeks left in the campaign, CTVNews.ca reached out to Singh’s campaign to see if they'd been asking Rihanna, “Where Have You Been?”

In an email, NDP spokesperson Melanie Richer said Singh felt “it was great to be followed by her" and “loves her last album Anti.”

CTVNews.ca also reached out to Rihanna’s representatives for comment to find out why she threw her diamond status behind Singh recently.

The businesswoman and founder of the Fenty fashion line isn’t the only girl in the world following Singh. Over the past several years, Singh has been amassing quite the impressive following on Instagram, with 279,000 accounts jumping onto the bandwagon and a decent number of them residing outside of Canada.

His wooing of social media followers has been coupled with Singh being noticed for his fashion sense -- and was even featured in GQ magazine in 2017.

And although Singh’s following might not be as large as Trudeau’s 3.2 million Instagram fans, it’s still more than what Conservative Leader Andrew Scheer has, so Singh should still be taking a bow.

Each federal party leader this year has music they blast during campaign rallies to help attendees rock themselves out, with Singh’s current walk-up song being “Differentology (Ready Fi Di Road)” by Bunji Garlin. But it remains to be seen whether Singh’s campaign will be unfaithful to their current song choice and switch to something in Rihanna’s famed discography.

As for Trudeau, it should be noted that the Barbadian singer followed him several years ago. This occurred around the time she was urging her army of fans -- nicknamed the Navy -- to phone him as part of the Global Citizen social-justice campaign as a way to highlight education.