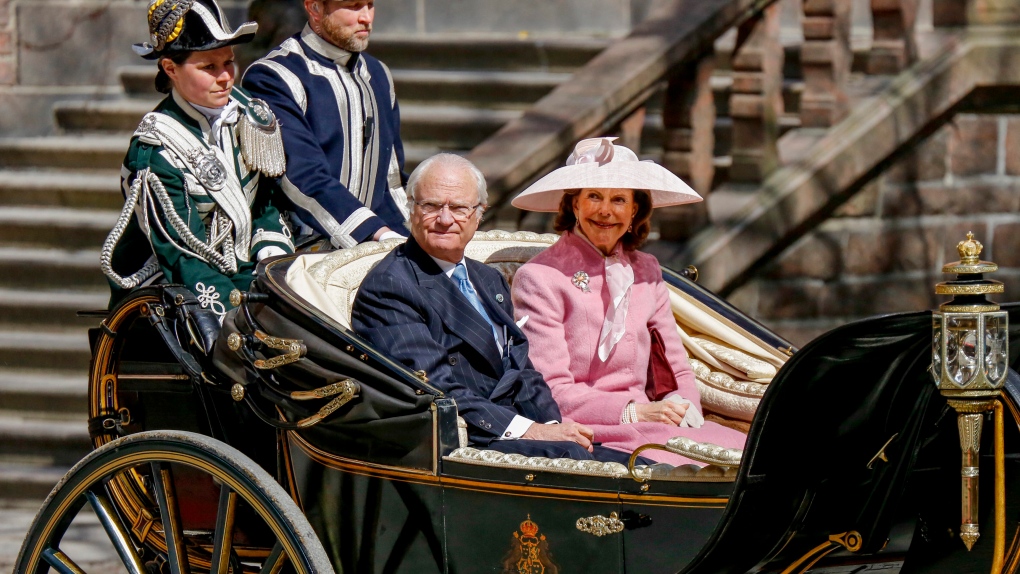 Sweden's Queen Silvia and King Carl XVI Gustaf arrive in an open carriage for lunch hosted by the City of Stockholm at the City Hall, part of the celebrations for the king's birthday, in Stockholm, Sweden, Saturday, April 30, 2016. (Christine Olsson / TT News Agency via AP)

STOCKHOLM -- Royals from around the world flew in, loyal Swedes lined the streets of Stockholm and the sounds of ABBA's "Dancing Queen" rang out from an army band on Saturday as Sweden celebrated King Carl XVI Gustaf's 70th birthday.

After a service in the palace chapel attended by the king's family and royal visitors from Japan, Spain, the Netherlands and Denmark, the outdoor pomp and celebrations for Sweden's monarch of 43 years included a tightly choreographed military parade. In the palace yard, children gave the king flowers before gun salutes rang out, and he went on a ride through Stockholm in an open horse-drawn carriage.

Under a clear blue sky, thousands of Swedes, some wearing plastic crowns, lined the route to City Hall. In the crowd were fans snapping cellphone photos and scouts in uniform, for the king is an honorary chairman of the World Scout Foundation.

At Stockholm City Hall, the king was visibly moved when he was greeted by a choir singing the Beatles hit "All You Need Is Love" -- with the guests joining in.

Born on April 30, 1946, Carl XVI Gustaf ascended the throne in 1973 and married German commoner Silvia Sommerlath three years later. They have three children and five grandchildren, with Crown Princess Victoria next in line to the throne.

The king's popularity has dived after newspapers alleged that he visited strip clubs, resulting in a poll showing that many believed he should abdicate in favour of the 38-year-old Victoria. He has dismissed quitting.

Swedish media, meanwhile, had feared the celebrations could be a possible target following reports that Iraqi authorities had told Sweden's security agency about alleged Islamic State militants who were reportedly planning an attack in Stockholm.