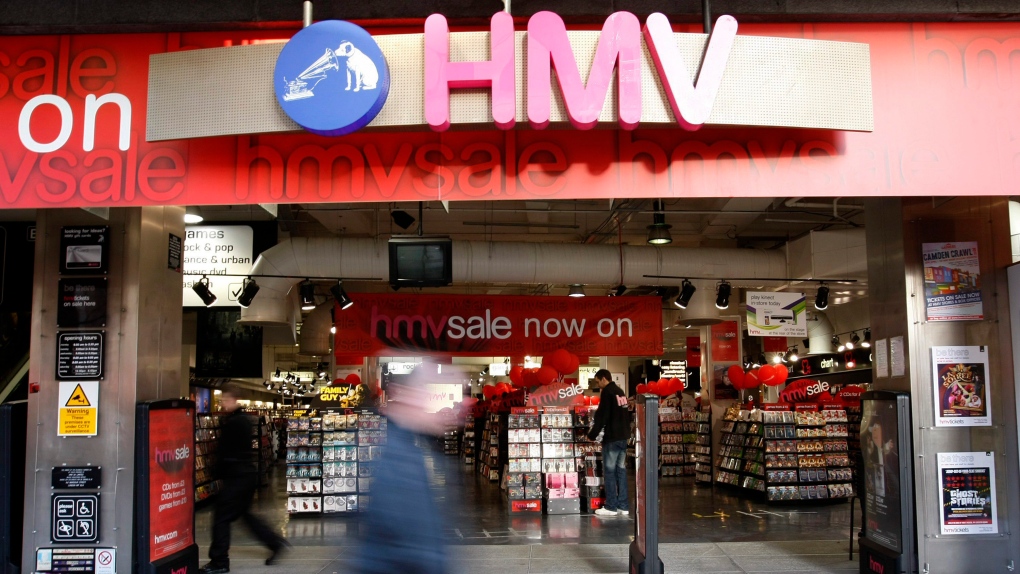 Shoppers walk past a branch of HMV, the music and games retailer in London, Wednesday, Jan. 5, 2011. (AP Photo / Alastair Grant)

TORONTO -- Sunrise Records is placing a major bet on Canadian music sales with plans to move into 70 retail spaces being vacated by HMV Canada.

The Ontario-based music retail chain has negotiated new leases with mall landlords across the country.

Sunrise's expansion gives the company a quick foothold in the Canadian music scene just as the industry's largest retailer closes shop. Stores will begin to open this spring after HMV liquidates and removes its signs.

"It's a good opportunity for us to get a lot more stores open," Sunrise Records president Doug Putman told The Canadian Press in an interview.

"We think there needs to be a great outlet across Canada to buy music."

The 32-year-old executive's investment comes at a time when many are dismissing physical music sales as more listeners shift to streaming options.

"A lot of the younger consumers still love having something tangible," he argued.

Putman has long believed in buying merchandise you can hold in your hands. He grew up working at the family business, Everest Toys, a manufacturer and distributor based in Ancaster, Ont.

He bought the Sunrise chain from Malcolm Perlman in October 2014 just as streaming was going mainstream. Perlman had spent the previous few years shutting down most of the Sunrise stores in the Toronto area, often blaming higher rent.

When Putman gained control of the company, there were five Sunrise Records stores left. He's since doubled the number by opening in Ontario cities like Ottawa and North Bay. He said all of those stores are profitable.

His approach is a departure from the financials at HMV Canada.

In court documents filed last month, HMV painted the image of a hemorrhaging business where sales were projected to slide to $190 million in 2016, after gradually weakening over the previous couple of years.

"But we've been able to find a way, working with landlords and our suppliers very closely, to mitigate that."

Putman said his company won't lose $100,000 a day when the mall locations open, and he has set a goal of making all stores profitable in 2018.

Locations included among the new lease agreements are the two-level store in West Edmonton Mall, as well as other malls in Burnaby, B.C., Winnipeg, Hamilton, Mississauga, Ont., and Saint Bruno, Que.

The company will outline a more extensive list of stores as the full leases are signed, Putman added.

Sunrise Records will invite 1,340 former HMV employees to apply for 700 positions as it prepares to move into the new locations.

The company was unable to reach new terms for about 30 of the closing HMV stores, Putman said, including the company's flagship location at Yonge and Dundas streets in Toronto. Some landlords weren't interested in a "pop culture" chain, he said.

Staying ahead of trends will be one of the biggest challenges Sunrise faces as it defines itself as a hybrid music retailer and cultural merchandiser.

Aside from CDs and DVDs, Sunrise will hedge its bets with board games, themed toys and a wide selection of music, film and TV apparel.

HMV tried that strategy too, but Putman believes he can do it better with a broader selection. He's also putting a major focus on growing interest in vinyl records, which will be placed at the front of stores.

Sunrise will also tap into other popular slices of nostalgia, like audio cassettes. Sales of tapes jumped 79 per cent to about 7,000 copies last year.

Putman said the company won't invest much in tapes, which he considers as a "niche market," but said Sunrise already stocks a number of cassettes and tape players.

Yet not every factor will be within the new owner's control.

Record labels are making seismic shifts in their priorities with a stronger focus on how digital sales drive music charts.

Some of last year's biggest hits, including Beyonce's "Lemonade" and Drake's "Views," were released under a digital-first strategy. Streaming and download services had the album weeks before record stores.

Other albums, like Grammy winner Chance the Rapper's "Coloring Book" and Kanye West's "Life of Pablo," went without a physical release at all.

Putman hopes those examples remain anomalies, though he said those hurdles are just part of navigating an evolving industry.

"Is the business the same today as it was five years ago? Of course not," he said.

"And it's going to be very different in three years. It's up to us to adapt and change."