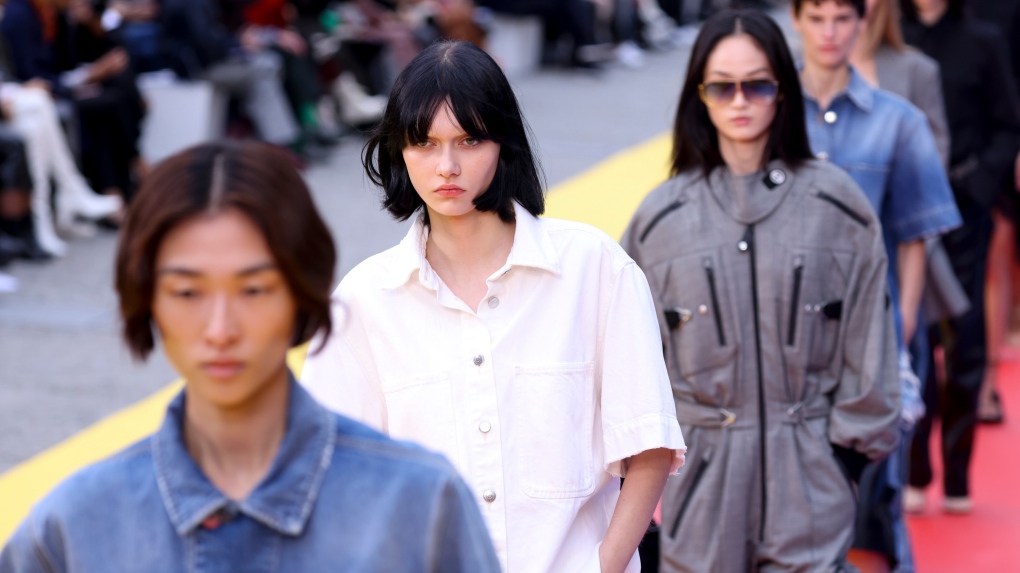 It was as much art fair as fashion show for Stella McCartney, who put on an art-infused spring collection at Paris Fashion Week on Monday vibrating with flashes of colour.

Iconic Japanese contemporary artist Yoshitomo Nara collaborated on the designs showcased outside the Pompidou Center Modern Art Museum, while sculptor Jeff Koons casually popped in to say 'hello' to McCartney post-show across an atelier of world-famous sculptures by Constantin Brancusi.

McCartney's eco-conscious display also pioneered the use of regenerative cotton.

Here are some highlights of the spring-summer 2023 collections in Paris:

A yellow, red and blue carpeted runway dazzled VIP guests for designer Stella McCartney's fashion show in the outdoor courtyard of Paris' Pompidou Centre -- a set created in homage to the art museum's famed coloured, structuralist exterior in the background.

This vibrancy continued in the spring fare that was typically fluid and sporty, with moments of bright colour.

This season, chic garments such as asymmetrical white mini-dresses cut on the bias, or tight pink scuba tops with a scooped side silhouette, were the canvas for Nara's vivid imagination. On the front of them, the Japanese artist created striking images of big-eyed girls and children in animal costumes, which the house described as "sinister."

The most-fun looks were in all-out colour, such as a stiff chalky yellow scuba top and pant look accessorized with bouncy black flip-flops and a blown up handbag. That cut a fine look against the bright yellow catwalk and had fashion insiders reaching for their cameras.

Speaking backstage after greeting her supportive Beatles father Paul McCartney, the designer said she was "chuffed" that this spring collection set a house record for being 87% sustainable.

"It's my most sustainable yet. I hope nothing was sacrificed; you shouldn't see any of the sustainability -- it should still look luxurious," she said.

It's no secret that fashion is a highly wasteful industry. Since her house was acquired by luxury giant LVMH, McCartney has also taken up a lobbying role inside the company to push it in a more ecological direction.

This season, one of the fruits of that role appeared on the runway. The designer said LVMH paid for a three-year pilot to make regenerative cotton -- grown in ways that maintain the health of the soil. She said the process "captures carbon in the soil" and "encourages nature, as opposed to destroying it with pesticides."

Elaborating on her advisory role, McCartney described it as bringing a "positive impact," especially having CEO Bernard Arnault on the front row seeing up close the success of her eco-friendly ready-to-wear.

McCartney's initiatives are being seen as transformative and influential to the fashion industry as a whole.

It was Versailles meets the Ming Dynasty -- via American football -- for U.S. designer Thom Browne's eccentric but luxuriant ready-to-wear treat.

Since Stella McCartney's show moved on from her regular Paris Opera venue, the space was open for Browne -- whose floor sweeping, silken A-line gowns regally ushered past guests Monday inside the ornate and gilded salons.

"Game of Thrones" actor Gwendoline Christie -- famous for being nearly 6 feet, 3 inches tall -- was fittingly chosen to open the collection in a giant, fastidiously embroidered Asiatic crossover gown-coat. Leather spiderman gloves, with which she clutched a metal rod, added a kink.

Diagonal pointed eyebrows seemed like a take on Asian period garb. Features such as that clashed stylishly with white American football stripes and numbers -- like a big "19" -- emblazoned on the back of silken gowns.

Collars were blown up in Peter Pan styles, leading the eye down to tiered and truncated silhouettes, voluminous Juliette sleeves, generous whooshes and ripples of fabric -- and even polka dots.