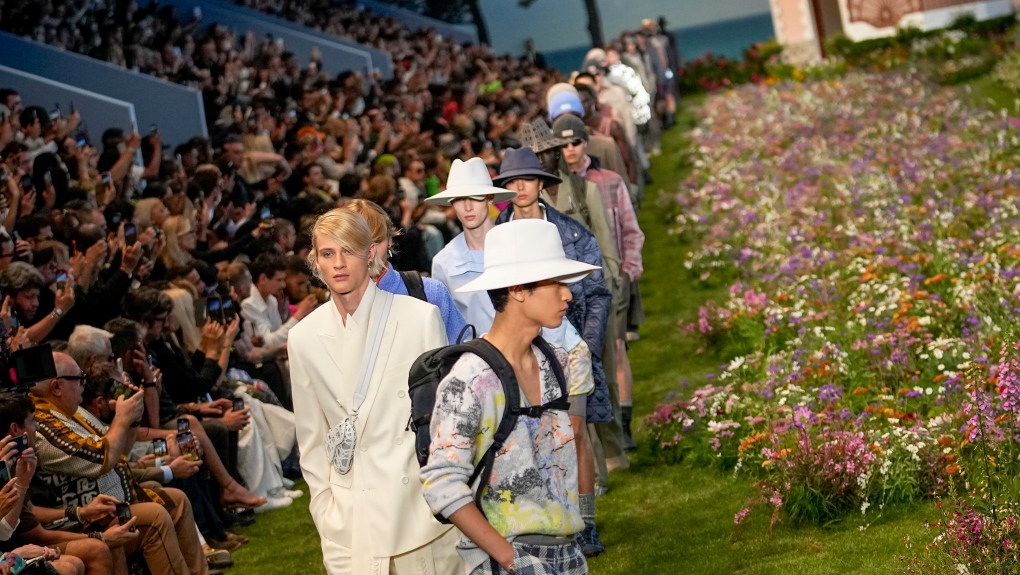 Flowers, art, and Dior's world-famous ateliers collided on Friday for a sweet-smelling explosion of creativity. The house's Paris Fashion Week show was an homage to late British painter Duncan Grant and celebrated member of London's Bloomsbury Group, who died in 1978.

VIP guests gawped as they entered a DIOR-branded tent to discover the makeshift country vista – replete with about 19,000 real poppies, wildflowers and flora planted on hills beside two reconstructed English country houses. All this for the 10 minute fashion show. The set was, of course, intended to evoke Grant's rolling landscapes.

There were almost as many famous faces on display as flowers. David Beckham and son Cruz, Naomi Campbell, J Balvin, Justin Timberlake and Jessica Biel were among the starry Dior front row staring out across the petals and tufts of grass.

Here are some highlights of Friday's spring-summer 2023 shows:

For spring, designer Kim Jones recreated the painter's universe by not just evoking his masterpieces, but by creating the actual garments he wore while working – such as his straw gardening hat reimagined as a pergola fused on baseball cap, fashioned by Stephen Jones the milliner. Grant's signature suits were also a key theme, yet reinvented in Jones' style with clever fashion forward twists.

Myriad references riffed on the 1930s – the artist's heyday. Two sleeves were used in the place of a retro sash on a loose vanilla double-breasted suit. They hung down in the middle abstractly, poking out underneath the jacket. Elsewhere tailored shorts sported turned-down waistbands in the slightly clunkier styles of that time between the two wars.

Woolly socks and gardening shoes were a fun nod to the painter, who spent much of his time outdoors, yet also a nod to Jones himself, a designer for whom humour is never far away. The palette of the collection was, fittingly, garden and pond inspired with greens and blues as well as pastels.

A fresh and sensitive wardrobe awaited guests at Paul Smith's spring show in the southeast of Paris.

Layering and optical plays were the themes of the season, in looks that built on the British sartorial master's bread-and-butter of colour, florals and suited looks.

A beautiful silver coat ensemble, loose and flowing, cut a trendy preppy vibe with its suit shorts that led the eye down to sock and suede loafers.

Elsewhere, it was the realm of gentle optical illusion in patterning that gave several ensembles a kinesis.

A granite-coloured tunic shirt was constructed in grooved fabric that rippled down in zigzags that changed shape as the model walked.

The Japanese fashion designer – a protege of iconic Comme des Garcons couturier Rei Kawakubo – put out an urban, yet soft, display for his eponymous brand Friday.

At the heart of Junya Watababe's designs is a concept called "Monozukiri," which means literally "production" or "manufacturing" in Japanese and for him has come to comprise a know-how of cutting edge techniques to make clothes.

Here for spring, contrasting prints, patterns and textures created visual tensions, while distressed jeans with a bias cut, replete with colourful appliqued patches, to give the collection some fun.

Logos of Coca-Cola and images of hamburgers on denim jeans made for a comment on the capitalistic nature of the world – and the fashion industry itself – in a nice moment of introspection.

There were plenty of interesting design twists: One jean jacket in Japanese denim had a regal stiffness, which nicely contrasting with the shabbiness of one of its breast pockets being missing.

Guests sat like students in a school assembly hall in rows for Kidsuper.

The irony was not lost on the invitees who appreciated the tongue-in-cheek vibe pervading the alternative house's fun and engaging coed designs.

An urban style ran throughout the vibrant looks.

Painted faces in prints stared out from ponchos, pants and coats in a colourful of clothes that spanned the rainbow in colour.

The strongest look of the 24-look collection was a layered multicolored puff dress in lime, bronze and orange tulle that looked a little like Cyndi Lauper reimagined by a nursery teacher.

People hoping to visit the Greater Vancouver Zoo were turned away at the gates Tuesday morning as conservation officers and Mounties dealt with a wolf escape.