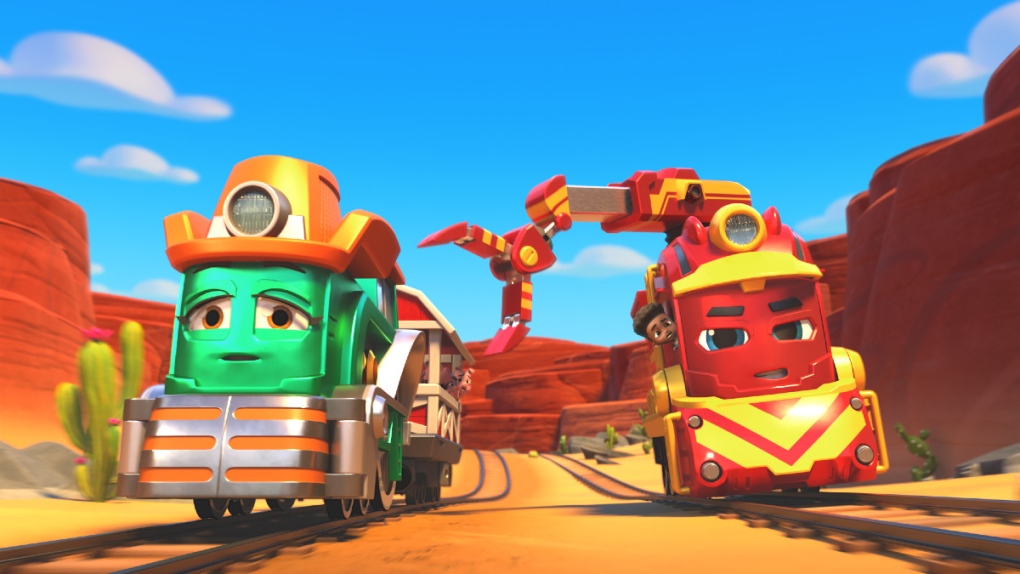 TORONTO -- The Canadian company behind "Paw Patrol" has launched a new children's animated series about trains, and insists the blockbuster puppy predecessor that counts Prince George among its fans still has a long life ahead of it.

Targeted at kids ages two to five, "Mighty Express" has the same tone as "Paw Patrol, the same creator in Keith Chapman, and the same franchise trajectory with an upcoming learning app and toy/apparel line.

Like "Paw Patrol," it also has a catchy theme song that may become another earworm for parents, especially those working from home during the pandemic with children who watch shows on repeat.

"I feel like it falls under the 'sorry, not sorry' category," laughed Jennifer Dodge, executive vice-president of Spin Master Entertainment, referring to parents who've lamented on social media about hearing the "Paw Patrol" song over and over.

"Like, 'I apologize, but I'm here to serve your children. So if they like it, I'm happy, and I apologize if it's driving you crazy."'

Animated by Toronto-based Guru Studio and available in over 160 countries, "Paw Patrol" features a precocious boy and group of rescue dogs, including a police pooch named Chase.

This past summer in a video posted on social media, Prince William revealed his son "George used to watch 'Paw Patrol' a lot." Actor Dax Shepard also teamed up with the franchise for a cheeky video welcoming parents to their "'Paw Patrol' years," filled with mountains of toys and exhausting playtime.

"Paw Patrol" was also drawn into social media conversations questioning the presence of TV shows that portray good cops, in the wake of the police killing of George Floyd. A tweet the show had put out expressing solidarity with a movement for "Black voices to be heard" resulted in largely tongue-in-cheek criticisms of Chase and the show's "police propaganda."

Dodge wouldn't comment on such discussions, which sparked unfounded rumours the show was cancelled and a New York Times headline saying: "The Protests Come for `Paw Patrol."'

The series, which is on Netflix in Canada and also some provincial broadcasters, is "here to stay," she said.

"'Paw Patrol' isn't going anywhere. We are currently in season eight on the air. We are in production on season nine. I think most importantly, and most excitingly, we are in full production on our first big CG theatrical animated feature that's going to be hitting screens globally next August."

Mikros Animation in Montreal is making the "Paw Patrol" movie, which Dodge said will be the first of many feature films at Spin Master.

Such efforts come during "a really interesting time in kids programming" amid the pandemic, Dodge said in a phone interview.

She noted parents who are working from home and feeling guilty about how much time their kids are spending on their devices want to trust what they're putting their young children in front of. Spin Master aims to provide preschool programming that is entertaining yet has an educational component.

"With our shows, we don't teach math or learning ABCs and one, two threes. But we definitely try to teach the lessons in resilience, in trying again, in sharing, in teamwork, in honesty -- those social emotional lessons -- so a parent will feel good when their child is watching it."

In the case of "Mighty Express," the learning comes from the "mega missions" the trains have to do with the help of their kid friends.

Spin Master also aims to "reflect the world around us and to give as many children as possible a chance to see themselves on screen," she said. With that, "Mighty Express" has characters of differing abilities and ethnicities.

Atomic Cartoons did the animation for the show. Toronto composers created the theme song.

Dodge said it's the first time Spin Master has launched a show globally everywhere on the same day.

The "Mighty Express" learning game app will launch either at the end of this year or early next year. A toy line with trains is due in fall of 2021.

The show will also have a "really robust YouTube presence," said Dodge.

"Mighty Express" has a slightly younger demographic than "Paw Patrol," but does have a little nod to its canine colleague.

"We did also put a dog in the show, in one of the trains, because we were like, 'We can't not have a dog in something now,"' Dodge said with a laugh. "I was like, 'We're not allowed to do a show that doesn't at least have one dog in it."'

This report by The Canadian Press was first published September 24, 2020.