'SNL' shows how people are talking about impeachment at holiday dinner 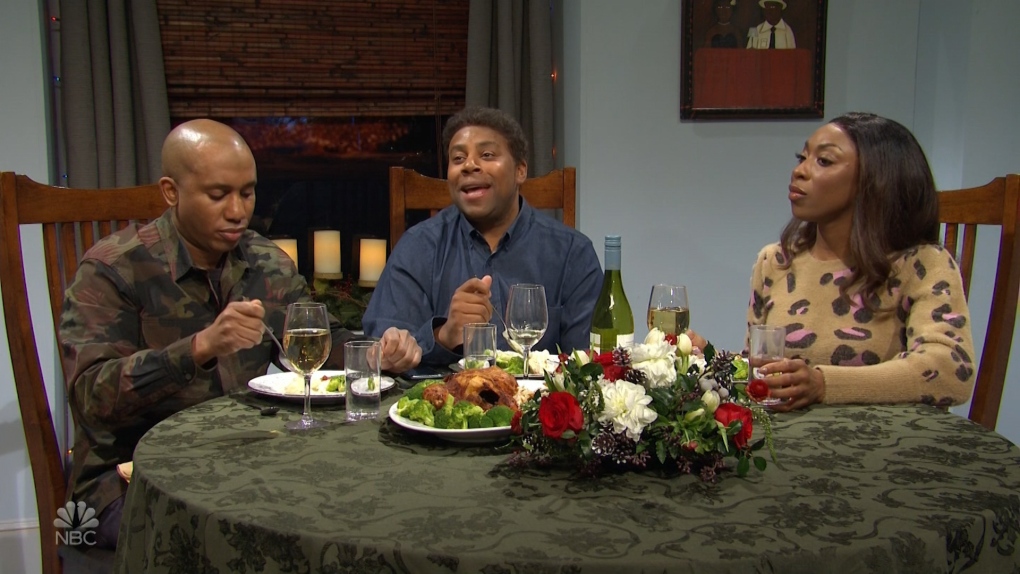 'Saturday Night Live' took audiences inside people's homes to see how many are talking about impeachment across the country during the holidays. (NBC/Braodway Video)

"Saturday Night Live" took audiences inside people's homes to see how many are talking about impeachment across the country during the holidays.

Aidy Bryant dressed as a magical snowman opened NBC's variety show on Saturday saying that it's almost Christmas and "folks in America seem more divided than ever."

"But if we listen in to some dinner conversations tonight, I bet we'd find out we have more in common than we realize," Bryant's snowman said. "And now we can listen because I hacked into three Nest home cams."

The first holiday dinner "SNL" took audiences to was in San Francisco.

"I'm so happy everyone flew here for the holidays, and I'm even more happy that they did it, they're impeaching Trump," Cecily Strong's character said at the dinner table.

The next dinner was in Charleston, South Carolina.

"Well, they did it. They're impeaching Trump," Beck Bennett's character said. "I'm sorry, it's a disgrace. What crime did he even commit?!"

The final dinner "SNL" looked in on was in Atlanta.

"Dad, c'mon, you're going to rile everyone up," Chris Redd's character said.

"Well, I'm just asking, do y'all think 'Bad Boys III' is going to be good or what?" Kenan Thompson's character said to his family.

Redd's character said he'd rather talk about politics instead.

The sketch then bounced around each of the three dinners in the cities showing the differences between each.

"I just don't understand who on Earth could vote for Trump after this," the family in San Francisco said.

Then the family in Charleston could be seen saying "how could anyone not for Trump after this?"

The sketch then cut to the Thompson's character in Atlanta asking his family, "who do you think is going to get voted off 'The Mask Singer' next week?"

"Now, those three families may seem different, but you see they have one important thing in common: they live in states where their votes don't matter," she said. "None of them live in the three states that will decide our election."

Climate crisis activist Greta Thunberg, who was played by Kate McKinnon, then appeared on screen to warn people about climate change.

"I also have a Christmas message," McKinnon's Thunberg said. "In 10 years, this snowman won't exist! Her home will be a puddle. Santa, reindeer, the North Pole, all of it, gone! The ice caps will melt and elves will drown."

McKinnon's Thunberg then wished the audience a "merry maybe our last Christmas to all."