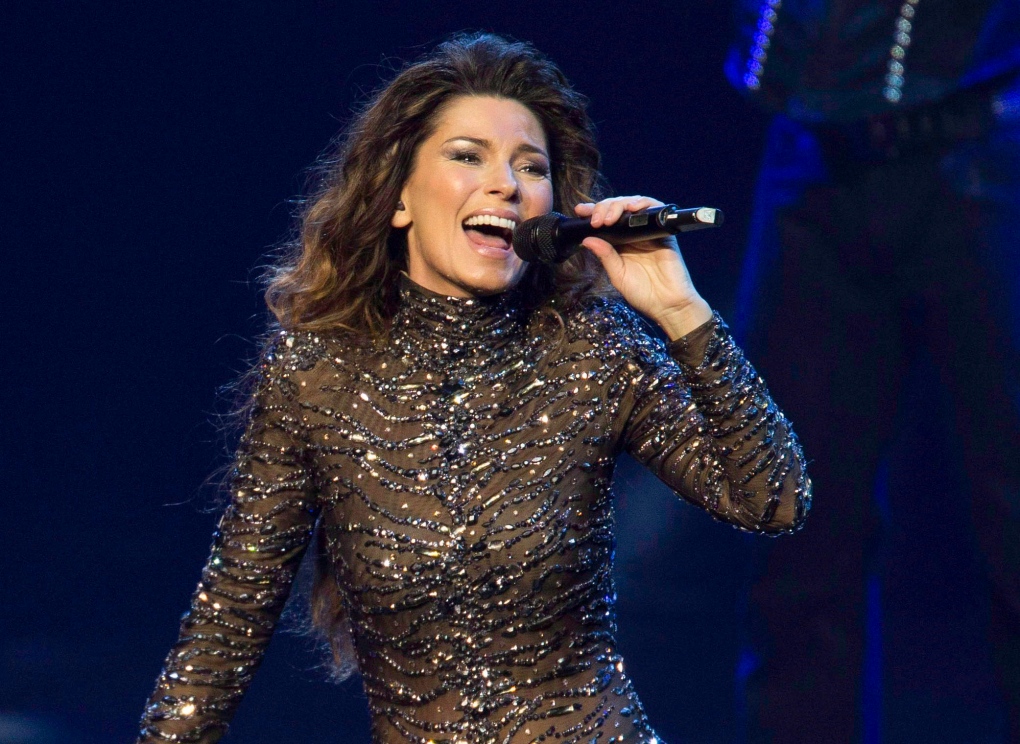 TORONTO -- While many people venture to Las Vegas to lose themselves -- in that boozy adult carnival of plushly polished clubs and gluttonously glam buffets, roulette spins and sin -- it was in that glitzy strip of Nevada desert that Shania Twain perhaps found herself.

After all, it was just over 10 months ago that Twain roared back onto the Sin City stage after an eight-year absence from performing, perched atop a glistening motorcycle in a skintight sequined catsuit. Soon, she found that her Vegas showcase was an equally snug fit.

Following a break from the stage that lasted two presidential terms and was plagued by tabloid-fodder romantic despair and a career-imperilling vocal issue, Twain says she felt immediately comfortable belting her diamond-certified arena-country hits in front of crowds again.

And after wrapping her first run of Vegas dates on June 1, Twain didn't want to stop. So she spent her summer writing songs that could form the basis of her first album since 2002's "Up!" -- and, she says, finally chart a new course for her record-breaking career.

"I'm in love with the music that I'm writing. (Actually) I don't know if that's the right way to put it," Twain told The Canadian Press this week in a telephone interview from Bahamas, being characteristically careful with her words.

"I guess I'm in love with the experience of writing again."

With Twain set to reclaim her spot on the Strip with her next run at Caesars Palace's regal Colosseum running from Oct. 15 to Dec. 14 (with a break in mid-November), it might be a while until fans get to hear Twain trilling her new tunes. But the very existence of new music at all is noteworthy after a decade-plus span of creative inertia.

That musical standstill is indivisible from the details of Twain's oft-reported romantic entanglements. To recap: it was with former husband and production wizard Robert (Mutt) Lange that Twain scaled the peaks of a singular musical career, which included two double-diamond albums in Canada (1997's "Come On Over" and 2002's "Up!") and the diamond-selling 1995 breakthrough "The Woman in Me." In fact, "Come On Over" -- which included the smash singles "That Don't Impress Me Much," "Man! I Feel Like a Woman" and "You're Still the One" -- is still the best-selling studio album by a female act and best-selling country album of all time.

In 2008, their marriage disintegrated after Lange reportedly began a relationship with Twain's best friend. Twain said in the aftermath that the split had left her so devastated she was temporarily unable to sing, an affliction she obviously overcame in time for her successful Vegas launch. But creating new music was another lofty challenge, given how crucial Lange had previously been to the process.

It's not surprising, then, that a major point of focus for Twain now is finding the right producer -- and she says she has "a lot of decisions to make there."

"I want somebody I can really, really trust with my vulnerabilities, and who will be sensitive to those," Twain said. "Because it is going to be a more personal style of songwriting to me. And I don't want to be bowled over by somebody that isn't going to appreciate where I'm at with that.

"And yeah, I want somebody who's got their own ideas and who's going to come to the table with an influence that I'm excited about."

Twain has been writing alone, a process she's enjoyed even if she concedes it's a "bit self-indulgent."

The past few years have been marked by a gradual shift toward selective openness for the notoriously private Twain. In 2011, she acquiesced to having cameras trace her blooming romance with new husband Frederic Thiebaud for the cheery OWN reality show "Why Not? With Shania Twain." Near-simultaneously, she released "From This Moment On," a rather unflinching autobiography that documented her difficult life, from her trauma-plagued upbringing in Timmins, Ont., to the romantic breakdown that rocked her in recent years.

Well, Twain pledges, her new music will also be revealing in a way that her ubiquitous hits of the past perhaps weren't.

"They're very personal, (and) I think probably a little bit more personal than ever before," said Twain, who splits her time between Switzerland and Bahamas when she's not in Vegas.

"I mean, I'm just trying to express myself more emotionally than maybe ever before in my music. I haven't been thinking commercially very much about the market, or the audience or anything like that," she adds, chuckling softly.

"And I've been probably truer to myself emotionally with the songwriting than ever before. I don't know how that's going to turn out in the end. But it's been an enjoyable process."

The only piece of new music she's issued since her split from Lange was the motivational, David Foster-produced 2011 single "Today is Your Day," but fans shouldn't necessarily expect more along those lines.

In fact, Twain isn't really sure what fans should expect because she doesn't know what to expect herself. Revisiting the songwriting process has Twain mulling what made her music successful in the first place -- fusing slickly catchy country-pop with the swelling choruses of arena rock and, as her career went on, increasing elements of adult contemporary pop.

"I think I'm going to be surprised myself," she said. "Because I consider myself to be a lot of different things, but the root of what is true to my taste, is contrast. I think that's why the records worked so well so far. Because they've been a mix of a rock edge, but a really genuine country edge as well, so you combine those two together and something really cool works.

"I don't know what the contrast will be," she adds of her new music. "But I'll definitely go for that wide margin of sounds and genre influence."

Less surprising, perhaps, will be her Vegas reprise -- because she doesn't see the need to make major changes. After an arduous preparation process and a launch that merited positive if less than glowing reviews -- the New York Times called the production "rotely dazzling" while the Las Vegas Review-Journal more enthusiastically chirped it was "everything it can and should be for a Shania Twain comeback vehicle" -- Twain feels she finally has the enormous production positioned just where she wants it.

No small feat, given that the 100-minute show -- titled "Shania: Still the One" -- features no shortage of tricky stagework.

Beyond the dazzling show-opening motorbike stunt, "Still the One" also finds Twain trotting about the stage both on a black stallion and another snow-white horse, welcoming audience members up to a cozy onstage campfire and interacting with a series of eye-candy sets, including a Wild West saloon and a "That Don't Impress Me Much" layout that includes two huge metal pipes churning out smoke.

Another crucial cog in that slick machine is, in fact, Twain's sister Carrie-Ann, who joins the country star nightly for a duet and provides a "continuing support" to Twain that is "tremendous and something (she's) never had."

The Colosseum was designed for Celine Dion, but one wouldn't know it venturing in for Twain's production. Outside the 4,298-seat venue, a gift shop sprung up at the show's opening hawking an imaginative array of Twain-branded baubles, including replica bowler hats, T-shirts depicting silvery studded horses, moisturizing body lotions, pint glasses and pink wicker cowboy hats, while nearby glass cases display some of her most famous outfits.

(The Vegas landscape is about to get more crowded with the announcement of Britney Spears' residency, but Twain has only kind words for the "sweet girl": "If we're there at the same time, I will absolutely go and say hi and I look forward to seeing her show. I'm sure it will be incredible.")

The acoustics inside the Colosseum and its mammoth high-definition screen (used to great effect during Twain's show) are also special. The entire setup is comfortable, and a far cry from the rigours of the road -- but Twain knows she's being spoiled by an experience that would not be replicable in tour form.

"The standard and quality of the technology there is something that you probably could never tour with, realistically," she said. "So it would be hard probably to let go of that aspect of it.... Touring is very, very different than being in a stationary location. And there's pros and cons to it, but right now, I'm enjoying the fact that I don't need to struggle with the fatigue of travelling all the time. I think that gets to your voice more than the dry air.

"So being stationary, there's a lot of luxuries to it, and of course the obvious one being that the room is so amazing."

During her intense preparations for the show, she said she only ventured outside about once a week at the behest of her husband, who felt she should "see the sun."

Now? She finally feels at home in the glittering-and-gritty tourist capital, spending her time "shopping, enjoying the restaurants, enjoying the landscape away from the Strip, playing tennis, and just really living a fairly normal life to be honest."

And the singer who once seemed almost hermetic in the face of her worldwide fame says she does get recognized while out and about, but not overwhelmed.

"I stay low profile. I blend in. And I think when you try to blend in, you succeed most of the time and that you feel that normalcy. That's how I go about it."

With the one-year anniversary of her Vegas launch approaching, the 48-year-old looks back and recalls that she never really needed to re-acclimatize herself with the stage, a platform that she's "very at home with."

"And that probably stems from the years of growing up on the stage more than anything. So being away from the stage for a few years wasn't enough to take that away from me."

But Twain did fret over how the show would land with Vegas audiences desensitized to spectacle.

Presenting her work to the outside world was something she hadn't experienced for a while, and -- as she prepares to do so again soon -- she remembers just how gratifying the response was.

"Where I was nervous or anxious was just how well the production would be received, because it was like a personal creation of mine overall as an experience -- I wrote the show, I was just deeply involved with every aspect of creating it," she said.

"So I wasn't really worried about standing up there and being Shania Twain. But I was more concerned about how the show was going to be pulled off, how smoothly it would run ... and how the critics would view it as a Vegas production.

"I was so relieved that it was so well-received."