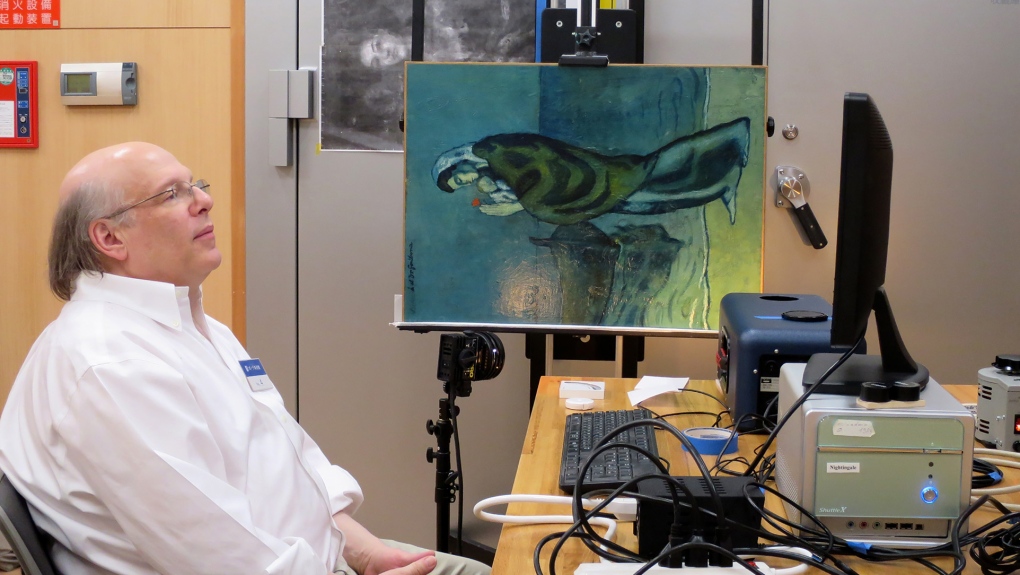 Art researcher John Delaney sitting next to the original painting of "Mother and Child by the Sea" by Spanish painter Pablo Picasso in 1902, during his research at Pola Museum of Art in Hakone, Kanagawa prefecture. (AFP PHOTO / Pola Museum of Art)

Infrared imaging technology has helped peel back the layers of a Pablo Picasso painting on display in Japan, and revealed a page from a 1902 newspaper and another composition below.

U.S. and Japanese researchers scanned the piece "Mother and Child by the Sea", owned by the Pola Museum of Art in Hakone, west of Tokyo, and uncovered a page of the French newspaper Le Journal from January 18, 1902.

"While the reason for the presence of newsprint in the paint layers is a mystery, the discovery is significant for Picasso scholars due to the proximity of the date to the artist's move from Paris to Barcelona," said the Washington-based National Gallery of Art, whose researcher John Delaney led the project in Japan.

Picasso is thought to have moved to the Spanish city in early January 1902, bringing a few canvasses with him, and the newspaper article revealed in the painting suggests the work was completed some time after his move.

The scan also provided clear images of an underlying painting of a woman sitting down next to an absinthe glass with a spoon in it.

However, it was not immediately clear why the artist used a page from Le Journal, which he was known to have read frequently.

"It may have been used... to cover previous layers before he painted another layer or the final composition of the mother and child," scientists said.

The section of newsprint brought readers news of parliamentary clashes in London and the creation of a new annual exhibition of painting and sculpture at the Automobile Club of France, a gentleman's club in Paris.