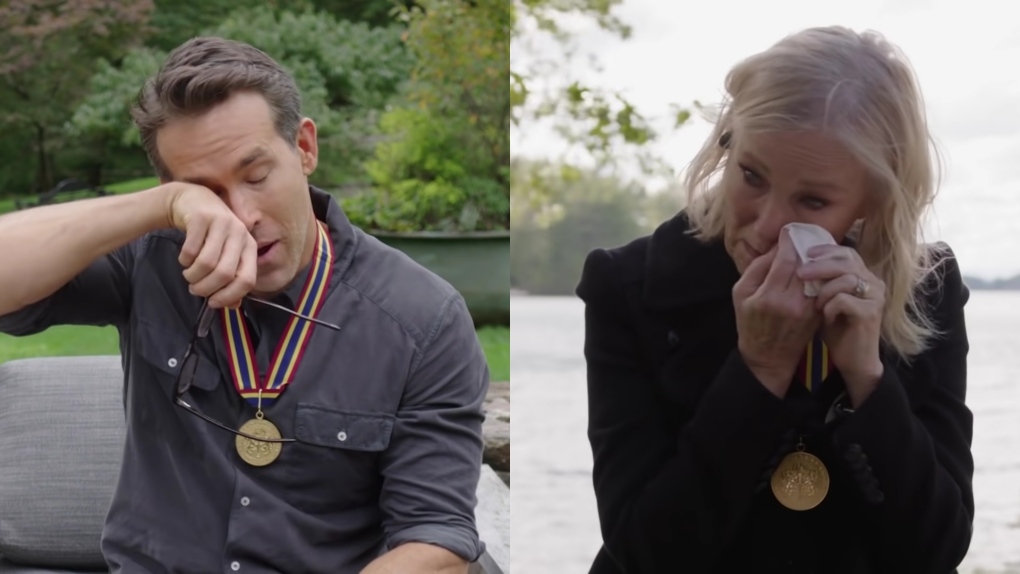 TORONTO -- Canadian actors Ryan Reynolds and Catherine O'Hara were honoured with the Governor General's Performing Arts Awards on Friday and received touching song tributes during the ceremony that prompted both tears and laughter.

Former Barenaked Ladies member Steven Page performed an original song, "Canada Love You Back," for Reynolds and thanked him for supporting Canadian causes while poking fun at the actor.

In his reaction video, the Vancouver-born star of the "Deadpool" film series can be seen laughing and wiping away tears as he watched the tribute.

"Oh, of all of the Canadian Ryans, you've got to be in our top three!" Page sang, prompting a chuckle from Reynolds.

Representatives from the various charities and initiatives that Reynolds has supported, such as Reconciliation Canada and Food Banks Canada, also made appearances in the tribute, as did fellow Canadian actor William Shatner and former Vancouver Canucks players Stan Smyl, Henrik Sedin and Daniel Sedin.

"That was stunning. I mean, that made me cry. Well, I guess I've made it." Reynold said at the end of the tribute.

Last night, Canada honoured me with a Governor General's Award and this video. I'm not crying. It's just maple syrup. @stevenpage is a friend and legend for wasting this amazing song on me. Thank you to Her Excellency, @GGCanada, Mary Simon. #GGAwards @CanadasNAC I'm a wreck. pic.twitter.com/0ALteFw2QN

On Twitter, Reynolds also thanked Page for the tribute and also thanked Governor General Mary May Simon for the honour.

"I’m glad I don’t have to be dead to experience something like this. I’m so beyond touched right now," Reynolds tweeted on Saturday.

For "Schitt's Creek" star Catherine O'Hara, Canadian actor and musician Noah Reid performed an emotional piano cover of "A Case of You," a song written in 1971 by Joni Mitchell, another legendary Canadian icon.

O'Hara can be seen in her reaction video breaking down in tears almost immediately as the song began. Tears then quickly turned to laughter midway through the song as Reid, who also had a lead role on "Schitt's Creek," put on variety of colourful wigs throughout the performance, paying tribute to the colourful wigs that O'Hara's "Schitt's Creek" character wore in the show.

"He obviously had a favourite. I don't blame him! Very flattering," O'Hara said at the end of the performance, before thanking Reid and wiping away more tears.

O'Hara's "Schitt's Creek" co-star Dan Levy also shared the video on Instagram and congratulated her for the award.

"I will be watching this forever. Congratulations, dear Catherine!" he said.