Ronnie James Dio to tour as a hologram 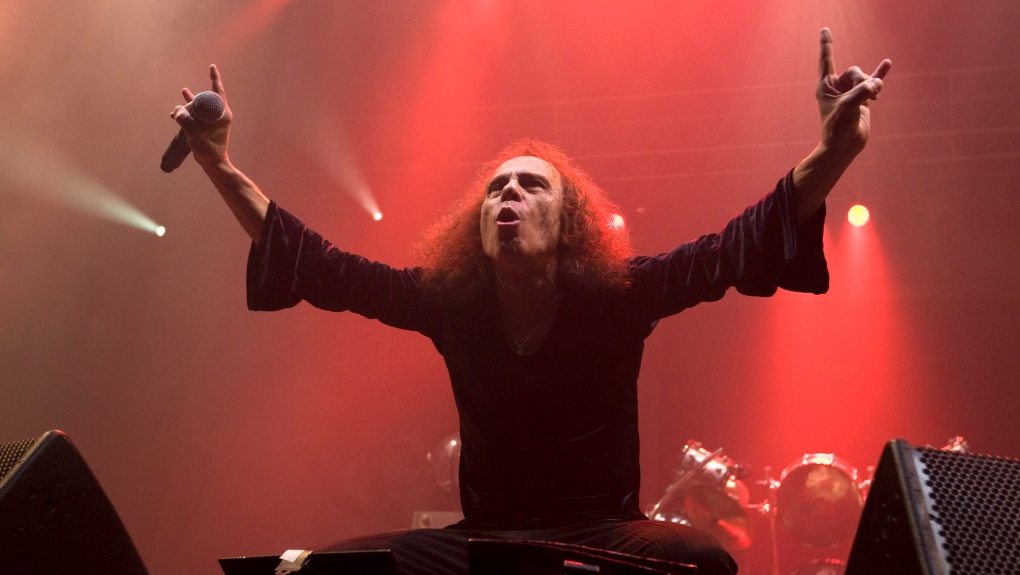 LOS ANGELES -- Images of explosions, fire and dragons stream across a massive digital screen set behind a band playing the opening chords of Dio's "King of Rock and Roll."

The screen switches to an apocalyptic scene of nuclear power plant smokestacks spewing against a molten-colored sky. The centre section goes dark and flames appear, transforming into an image familiar to fans of hard rock/heavy metal music: the diminutive figure of Ronnie James Dio.

The singer died nine years ago, but advances in hologram technology have made it possible for fans to watch him perform and hear his voice with a live band in the "Dio Returns" tour.

The tour, which starts Friday in Ft. Myers, Florida, will include a lineup of former Dio band members and special guest vocalists playing a variety of Dio's songs. The Dio hologram will perform on eight songs, with former Judas Priest singer Tim "Ripper" Owens and Lynch Mob's Oni Logan handling the rest during the 90-minute show.

Guitarist Craig Goldy, drummer Simon Wright and keyboardist Scott Warren -- all previous Dio members -- will be joined by bass player Bjorn Englen on the 18-city tour that may extend after the initial run.

"It's something that we want to do for the fans that never got to see Ronnie and the band or want to see them again," Dio's widow, Wendy, said. "This is a show, bringing Ronnie back and the memories, but also the band."

Dio, who had one of the most recognizable voices in hard rock, died from stomach cancer at 67 in 2010.

Small in stature at 5-foot-4, he had a soaring-yet-melodic voice unlike any other in the genre. Dio was the lead singer for his eponymous band as well as Rainbow. He also joined Black Sabbath after Ozzy Osbourne left and had a successful solo career with hits like "Holy Diver," "Rainbow in the Dark" and "The Last in Line." He later joined members of Black Sabbath in Heaven and Hell.

Wendy Dio first had the idea of a Ronnie hologram when she was approached by Eyellusion CEO Jeff Pezzutti in 2015.

They collaborated to create a Dio hologram that debuted in front of 75,000 fans at the 2016 Wacken Open in Germany and a short European tour in 2017.

Dissatisfied with how the hologram looked -- Wendy Dio in particular didn't like Ronnie's eyebrows -- the team all but started over, using breakthroughs in technology to create a crisper hologram with added depth.

The video screen also was expanded to create a more stirring visual effect, with dragons and knights and dramatic scenes surrounding Dio as he performs.

"It's the closest thing you're going to get from the original," Pezzutti said. "There's nothing closer, really. You want to create some of the excitement from back then."

Eyellusion, a Los Angeles-based hologram production company, uses some of the same motion-capture techniques James Cameron pioneered in the movie "Avatar" to create the Dio hologram.

Animators spent hours watching Dio performances to capture his movements and the vocals are taken from various live shows throughout the singer's career. Three technicians handle the video and the hologram during the shows.

"We wanted him to be himself," said Wright, who played with AC/DC in the 1980s. "We wanted it to feel like it's him, it captures his spirit when he was on stage and I think they did a great job with it."

The concept of holograms and live music first came to the forefront when a facsimile of the late rapper Tupac Shakur shocked the crowd while appearing onstage with Dr. Dre and Snoop Dogg at the 2012 Coachella Valley Music and Arts Festival.

Michael Jackson also appeared in holographic form at the 2014 Billboard Music Awards. Roy Orbison and Elvis Presley performed as holograms, and a Whitney Houston hologram tour could be coming soon.

Eyellusion also created the hologram for "The Bizarre World of Frank Zappa" tour earlier this year, using the same technology as in "Dio Returns."

"YouTube is not the place to judge this; it's something you need experience," Goldy said. "A pregnant woman is not going know what it's like to give birth just because a mother tells her what to expect. Once she goes through the experience, she understands. You just have to experience it."