'Romeo and Juliet' gets Palestinian twist in Gaza show 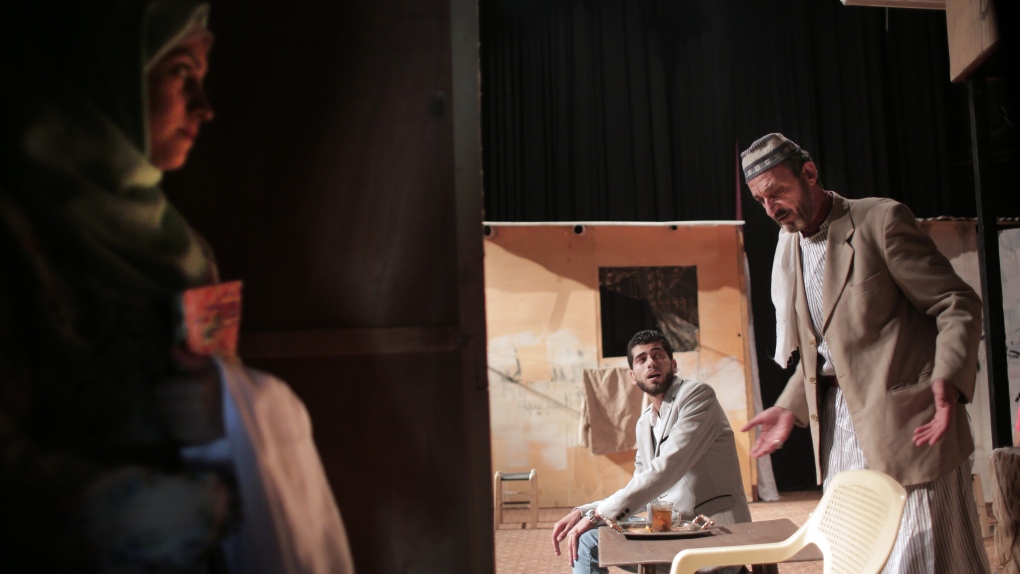 GAZA, Palestinian Territory -- Shakespeare's "Romeo and Juliet" has opened to audiences in the Gaza Strip, albeit with a distinctly Palestinian twist.

Instead of the forbidden love story of Renaissance-era European aristocracy, the star-crossed young couple in Gaza's version of the play is divided by politics stemming from the deep internal Palestinian split between two rival movements.

Yousef, a son of a member of Gaza's ruling Islamic militant group Hamas, falls in love with Suha, the daughter of a fanatical member of the rival Fatah party, rather than Shakespeare's feuding Montagues and Capulets.

Dubbed "Romeo and Juliet in Gaza," the performance has brought a rare taste of foreign culture to this conservative and isolated territory. But it is even more noteworthy for its critical look at the political rift that has crippled life in Gaza for nearly a decade.

"It's a call for love; to give a space for love and for youths to dream of a beautiful future away from the current state in Gaza, especially the youths and their suffering," said director Ali Abu Yassin.

In 2007, Hamas routed forces loyal to President Mahmoud Abbas and ousted his Fatah party in a week of deadly street battles. Since then, Abbas' rule has been confined to the West Bank, while Israel and Egypt have imposed a blockade on the Hamas-ruled Gaza. The measures, which Israel says are needed to prevent Hamas from importing arms, have brought Gaza's economy to a near standstill.

Attempts by Hamas and Fatah to reconcile, meanwhile, have repeatedly faltered. The rift is so deep that today some families may reject a marriage proposal based on the political affiliation of the suitor.

The "great resemblance" between the feuding families in Shakespeare's original tragedy and "the reality of Gaza" inspired Abu Yassin and Atef Abu Saif, a renowned novelist, to come up with play, Abu Yassin said.

The play was performed eight times last month -- just as the Hamas-controlled police prevented academics and national figures from holding a conference calling for unity with Fatah.

On a recent evening at Al-Mis'hal Cultural Center in Gaza City, the audience laughed and clapped -- and on occasion, even got up on its feet in appreciation of the 70-minute performance on the theatre's modest stage.

After the Palestinian national anthem was played, the black curtains opened to a scene of a cafe shop in a refugee camp neighbourhood where youths were talking and playing cards.

To the 350 spectators, it was an accurate depiction of Gaza's reality: in a territory where unemployment is over 40 per cent, cafes are often crowded with idle young men who have little else to do.

The same cafes are also packed with Fatah members, who continue to collect salaries from the West Bank government under the condition that they not work in Hamas' administration.

In the play, as Suha's father, a local doctor, enters the cafe, it is clear from his shaven face that he is from Fatah.

Yousef's father Awni, a bearded merchant representing Hamas, also frequents the cafe, where he quarrels with the Fatah doctor. At times they scuffle, prompting the cafe owner to kick them out.

"Don't reconcile! Keep cursing at each other" the owner yells at them.

"We will leave this land to you and go," he adds, drawing a burst of applause from the audience.

Then, laughter erupted when the doctor asked the cafe owner if he was following the reconciliation news between Hamas and Fatah. The two parties have held dozens of negotiation rounds and announced several agreements, but none has been implemented.

"They feel the play represents them, expresses what they can't express. They live with the story because it's exactly like them," said Abu Yassin.

Knowing the consequences, the old cafe owner advises Yousef to change his mind and not to fall in love with Suha because their families won't accept each other.

However, in the Gaza take on Shakespeare's famous story, the ending is different.

Yousef, like hundreds of young Gaza men, flees to board an illegal migrant boat promising a better life in Europe, as Suha screams for him to return. His fate is never revealed, a reminder of dozens of Gazans who disappeared when a migrant boat sank in 2014.

The European families in the original tragedy reconciled after the death of the star-crossed lovers, but in the Gaza version, they remain enemies.

Mohammed Zoghbor, a doctor who watched the play, says the ending reflects the lack of hope in the bitterly divided Palestinian society.

"The home remains divided, the families remain divided, the youths are divided and talks take place for the sake of talks without results," he said.

Abu Yassin said it is a coincidence that the play is being performed around the 400th anniversary of Shakespeare's death. He said the play would be performed again soon as part of a series of activities organized by the British Council, a U.K.-backed cultural organization, to mark the anniversary.

Abu Yassin has directed dozens of plays and other arts in Gaza, which lacks a national theatre, but "Romeo and Juliet in Gaza" was the most important and most successful, he says.

"What makes Shakespeare's work distinguished is that it fits all the times and all the places. It's universal," he said. "The theatre here of course is not like the theatre Shakespeare used to perform in, but it's still important to try to keep it operating."