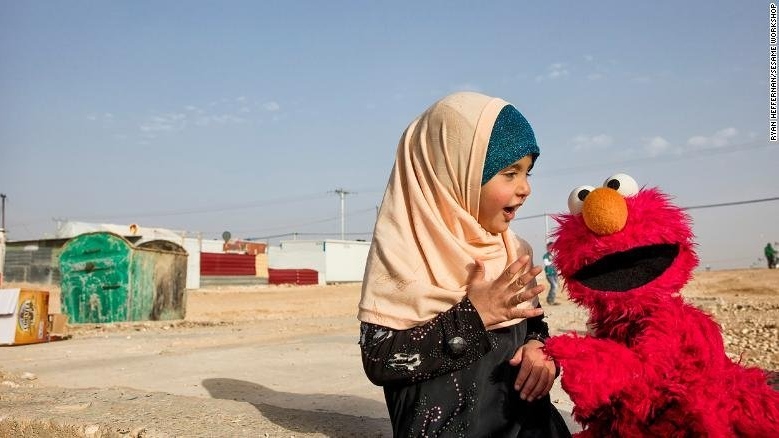 Sesame Workshop and the International Rescue Committee have joined forces to help Syrian refugee children through educational learning programs, including the launch of a new "Sesame Street" show in Arabic. (Ryan Heffernan/Sesame Workshop via CNN)

TORONTO -- Thousands of young refugees could be hearing a version of "Could you tell me how to get to Sesame Street?” in Arabic next year.

Starting February 2020, there will be a new, Arabic-language Sesame Street specifically focusing on displaced refugee children.

One Syrian refugee now living in Canada had a hand in creating the new show called “Ahlan Simsim,” which translates to “Welcome Sesame.” It’s designed to help young refugees cope with trauma and deal with feelings of isolation.

In a phone interview with CTVNews.ca, Mohammad Aljamous, who goes by Jamous, said this version of the classic children’s show, is “focused on trauma recovery.”

He hopes it will help child refugees “cope with the current situation living away from home and the hard condition in the (refugee) camps.”

Like its English-language counterpart, “Ahlan Simsim” will feature Muppets and human actors, while also offering coping tactics such as breathing techniques to help children deal with stress.

Jamous said one of the fictional characters will be fleeing war themselves, “so they will address and show ‘this kid needs more help, more friends.’”

According to the show’s website, Sesame Workshop partnered with the International Rescue Committee (IRC) to develop the show, which was funded by a US$100-million grant from the Chicago-based MacArthur Foundation.

Last year, Jamous was tapped to help get the show off the ground as a consultant, while he’d been working in the digital department of the IRC. Before that, he’d been a refugee in Jordan for more than six years.

“I was able to understand and give advice because I am a refugee myself,” he said.

Some of his insight included convincing the team to use the mobile messaging app Whatsapp as a way to generate buzz for the show, since it’s many refugees’ primary forms of communication.

As a refugee, Jamous saw firsthand how difficult living in that situation could be for adults, never mind children.

“(The team) did research and they know what kids lack and need,” Jamous said. “So the content is going to be helpful for the families and the kids in a way that will enhance their knowledge and their life and social skills.”

The show will heavily focus on education, as many of the displaced children don’t have access to regular schooling. “Education is the best recovery strategy of war and conflict,” Jamous said.

He said it’s unfortunately common for families in camps to have “have long days where they don’t have anything to do besides watching TV. So it’s good to invest in time in watching something that will benefit them.”

Jamous said that “Ahlan Simsim” will offer the children a “good point of view” of themselves to combat prejudice against them.

“Because, you know, people can sometimes will look at them as refugees and have negative images of them,” Jamous explained.

This past February, Jamous was able to arrive in British Columbia, through the help of his sponsors, Canada Caring Society and the B.C. Muslim Association.

Since arriving in Canada, he’s been employed in the hospitality industry, but has also been continuing to help his colleagues overseas to continue finessing the show.

The new innovative version of Sesame Street will be hitting TV screens across the Middle East starting February 2020 – but this isn’t the first time Sesame Workshop has sought out Arabic-speaking audiences. Between 1979 and 1990, Sesame Street Arabic or "Iftah Ya Simsim” aired across the Arab world.