From Star Wars to Star Trek, some of Hollywood's biggest celebrities were in Toronto this weekend for Fan Expo.

The annual event celebrates everything from movies to television shows, to comic books and video games.

Dazzling and intricate costumes were also on display, as some of the best cosplayers in North America competed to qualify in the Masters of Cosplay contest.

Below is a recap CTVNews.ca's coverage. Using our app? Touch here. 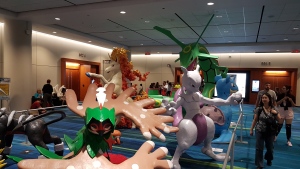