Publisher denied appeal of ruling that it invaded Meghan's privacy 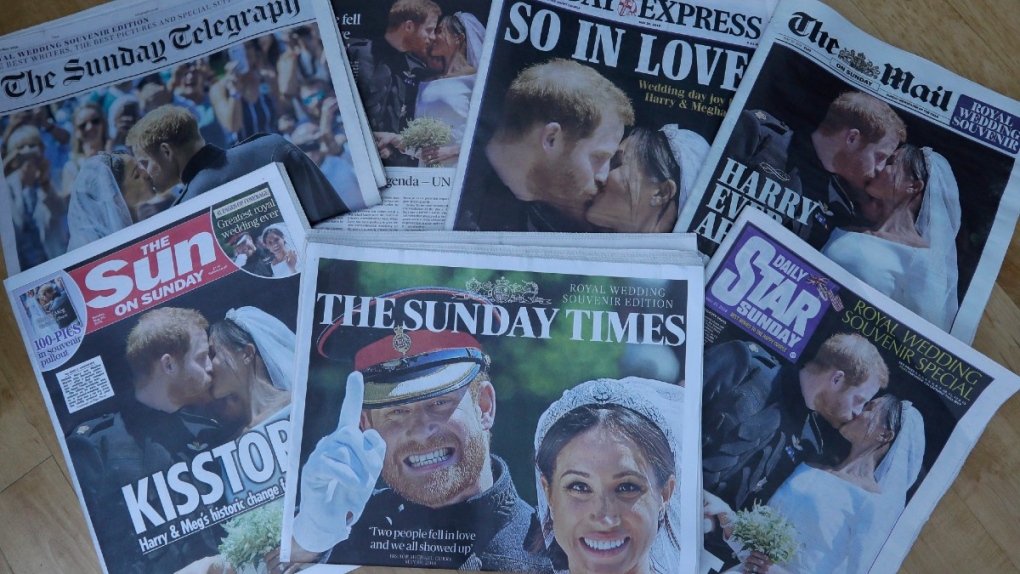 A photo illustration showing a selection of British Newspaper front pages with pictures from the wedding of Prince Harry and Meghan Markle, in London, on May 20, 2018. (Kirsty Wigglesworth / AP)

LONDON -- A British newspaper publisher said Tuesday it plans to appeal against a judge's ruling that it invaded the privacy of the Duchess of Sussex by publishing parts of a letter she wrote to her estranged father after her 2018 marriage to Prince Harry.

The American former actress Meghan Markle, 39, sued publisher Associated Newspapers for invasion of privacy and copyright infringement over five February 2019 articles in the Mail on Sunday and on the MailOnline website that reproduced large portions of a letter she wrote to her father, Thomas Markle.

High Court judge Mark Warby ruled last month that the publisher had misused the duchess's private information and infringed her copyright. He said the duchess “had a reasonable expectation that the contents of the letter would remain private” and concluded the paper's publication of large chunks of it was “manifestly excessive and hence unlawful.”

In written submissions released as part of a court hearing on Tuesday, Associated Newspapers' lawyer Antony White sought permission to appeal, saying a bid to overturn Warby's ruling “would have a real prospect of success.”

The publisher's lawyers argue that the duchess wrote the letter not simply as a private message to her father but “for the public record upon advice from royal family members and palace communications staff and for use as part of a media strategy.”

The judge refused permission to appeal, saying he saw “no real prospect” of another court reaching a different conclusion than he had.

“The Court of Appeal, of course, may take a different view,” he said, adding that Associated Newspapers can take its case directly to the appeals court.

Lawyers for Meghan, meanwhile, demanded the publisher hand over the letter and destroy any electronic copies or notes it held. They also asked the judge to order the Mail on Sunday to remove the five articles from its website and to run a front-page statement about the duchess' legal victory.

Ian Mill, an attorney for Meghan, said “the defendant defiantly continues to do the very acts which the court has held are unlawful.”

The publisher's lawyers agreed to remove the articles from the website until the legal issues are resolved. The judge didn't immediately rule on the request to hand over the letter.

He ordered Associated Newspapers to make an interim payment of 450,000 pounds ($625,000) toward Meghan's legal costs, and said further “financial remedies” would be dealt with later.

Meghan, a former star of the American TV legal drama “Suits,” married Harry, a grandson of Queen Elizabeth II, at Windsor Castle in May 2018. Their son, Archie, was born the following year.

In early 2020, Meghan and Harry announced they were quitting royal duties and moving to North America, citing what they said were the unbearable intrusions and racist attitudes of the British media. They recently bought a house in Santa Barbara, California, and are expecting a second child.

In his ruling last month, the judge ruled in Meghan's favour on most points, but said a “limited trial” should be held to decide the “minor” issue of whether the duchess was “the sole author” and lone copyright holder of the letter. It is expected to take place in the fall.