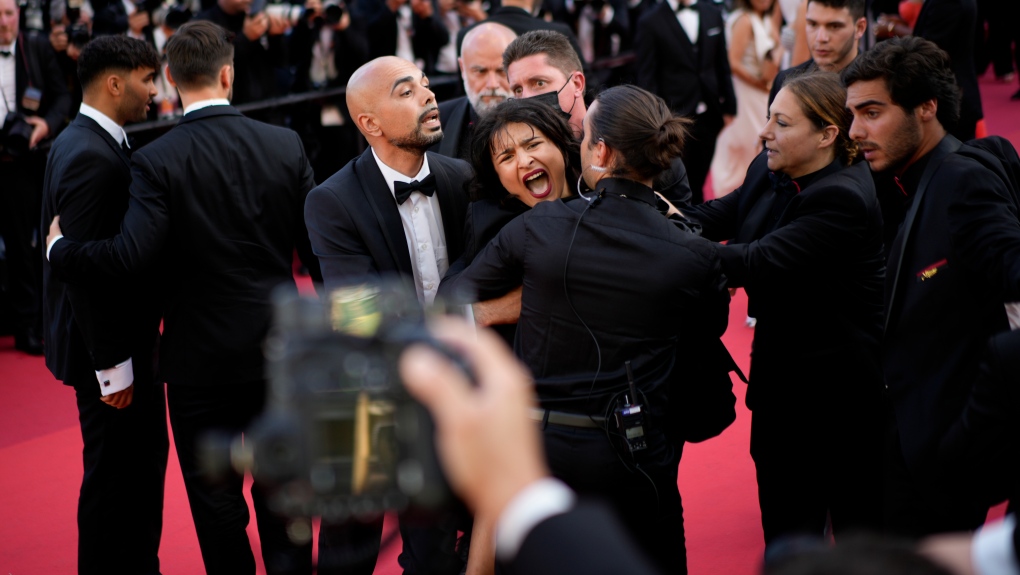 A protestor wearing body paint that reads 'Stop Raping Us' in the colour of the Ukrainian is removed from the red carpet at the premiere of the film 'Three Thousand Years of Longing' at the 75th international film festival, Cannes, southern France, Friday, May 20, 2022. (AP Photo/Daniel Cole)
CANNES, France -

A woman who stripped off her clothes to reveal a message against rape written on her body crashed the Cannes Film Festival red carpet premiere of George Miller's “Three Thousand Years of Longing” on Friday.

The unidentified woman tore off her clothes during the film's red carpet procession to reveal the message “Stop raping us” written across her torso next to the blue and yellow colours of the Ukraine flag. Red was also painted on her legs and groin.

While she yelled “Don't rape us!” security quickly encircled her and took her off the red carpet.

Russia's war in Ukraine has often been in the spotlight at this year's Cannes festival, which is screening several films from Ukrainian filmmakers. The festival barred Russians with ties to the Kremlin from attending. Ukrainian President Ukrainian President Volodymyr Zelenskyy delivered a surprise address Tuesday to open the festival.

A gunman opened fired inside a busy shopping mall in the Danish capital on Sunday, killing several people and wounding several others, police said.