Pokemon Go is now officially available to download in Canada for iPhone and Android users, ending a much-hyped wait for fans of the 20-year-old Japanese franchise since the game was released in other countries earlier this month.

The announcement came mid-afternoon on Sunday.

Pokémon GO is now available in Canada! Discover and capture Pokémon all around you. pic.twitter.com/uTXwIk85IZ

The game transports players into a world of augmented reality gaming where Pokemon characters from the game’s earliest generation appear onscreen and can be captured, renamed and trained for battle. A map-like interface allows users to seek out roaming Pokemon using GPS and catch them with Pokeballs using a simple finger swipe.

When players are strong enough, they are invited to join one of three teams and battle other players at local gyms – virtual landmarks plotted on the map – and fight for glory.

The game was already available in the United States, Australia and Asia, and some tech-savvy Canadian users found ways to download Pokemon Go before its official launch.

But those itching to get outside and catch their first wild pocket monsters were hit with a minor snag on Sunday as the game’s servers were temporarily down.

“Our servers are humbled by your incredible response. We are working to resolve the issue. Please try again soon!” read the message, which appeared when users attempted to make an account. 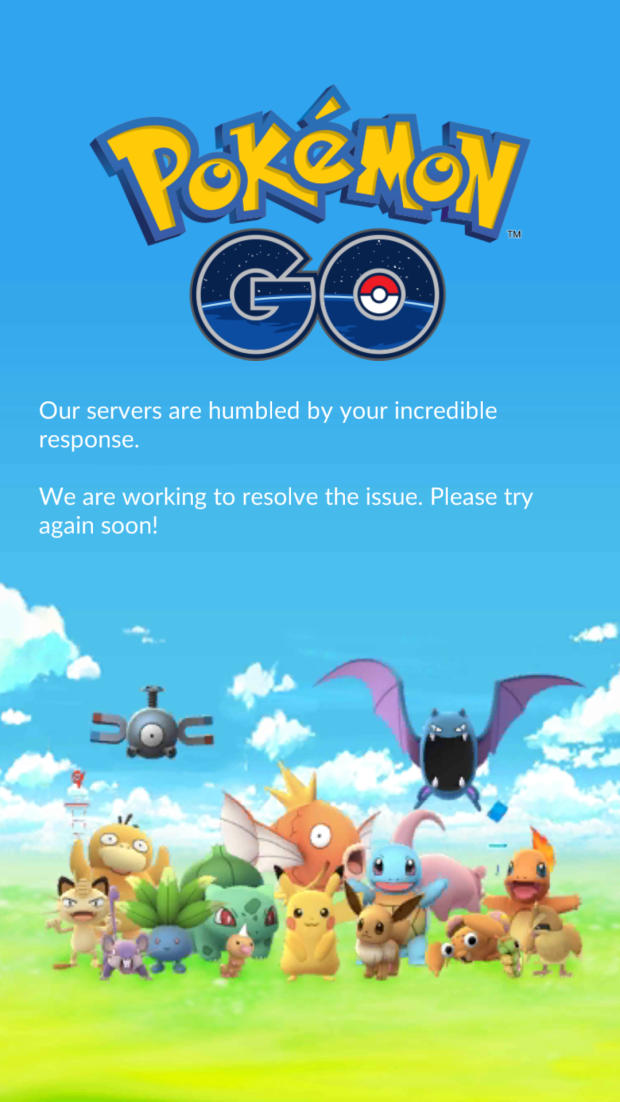 Pokemon Go has been plagued with occasional server problems since the game launched. On Saturday, a DDOS attack (short for “distributed denial of service,” which essentially makes an online service unavailable) knocked the game offline for several hours.

The app has become a smash hit since its initial release and quickly became one of the most downloaded apps in the world. It has also spawned several viral stories, including the case of a U.S. police force trying to lure criminals with a rare Charizard and an announcement from Auschwitz banning users from catching Pokemon at the former Nazi death camp.