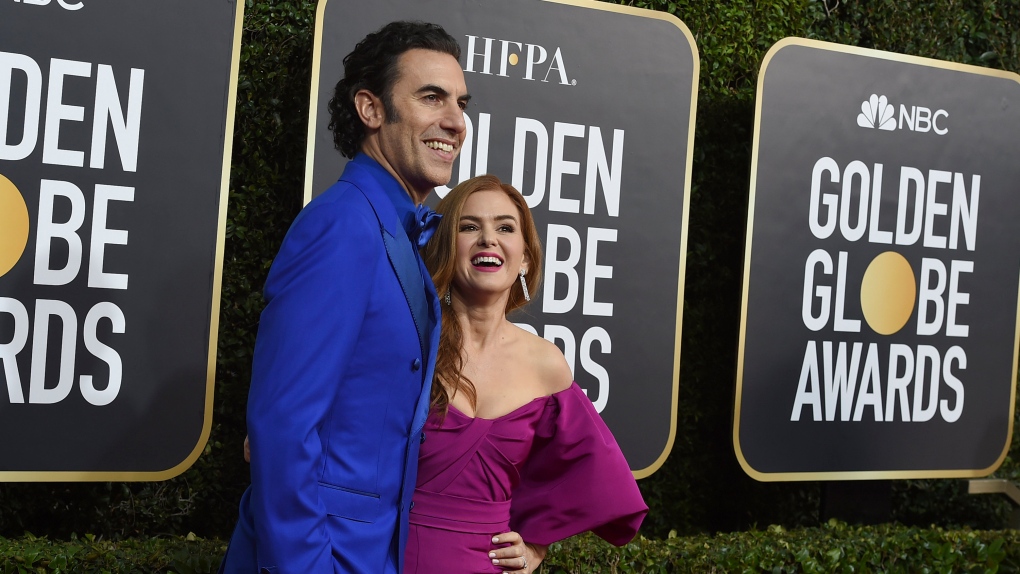 NEW YORK -- There were plenty of pink, puffy sleeves and lots of white on the Golden Globes red carpet as the stars shimmered and shined Sunday on one of the season's biggest nights for fashion.

Reese Witherspoon went classic Hollywood in a white body hugger, while Charlize Theron sported a draped sash on one shoulder in neon green and a black bustier underneath.

Pink had a moment in soft hues for Kirsten Dunst (Rodarte) and Dakota Fanning. Isla Fisher and Tiffany Haddish went for bold hot pink, while Margot Robbie showed off a burst of encrusted colour in a strapless top with a white column skirt below, her hair loose and beach wavy. Jennifer Lopez wore a voluminous white gown with a huge bow at the front in gold and jewel-tone green.

Chokers were abundant, from Theron to Cynthia Erivo, the latter wearing a huge blue stone at the centre of her short necklace.

Erivo's hand-beaded custom Thom Browne gown was tuxedo inspired in black and white. The "Harriet" star and fashion standout said the dress includes designs of her favourite flower, the peony, at the hem and in her lining. The short-sleeve look took 800 hours to create.

Jodie Comer, from "Killing Eve," sported another fashion trend of the evening, puffy sleeves, in emerald green. Nicole Kidman represented for the reds in a classic strapless look with subtle draping and a short train. So did Scarlett Johansson in a longer train and bustle bow and Olivia Colman in custom raspberry from the Emilia Wickstead Collection (big sleeves, check).

Lucy Boynton, a proven young Hollywood fashion star, wore a silk and velvet custom Louis Vuitton embroidered with glass beads. It had a high collar, strong shoulders and was belted at the waist. Gugu Mbatha-Raw stunned in metallic golden yellow, her hair cropped, while Zoe Kravitz went for dots -- smaller ones on top and large ones on the bottom of her dress, courtesy of Saint Laurent by Anthony Vaccarello.

Kravitz wasn't the only star to reach for a pattern. Taylor Swift showed up in a power print from Etro. It was a custom look in navy silk jacquard with a floral design of huge blooms.

Renee Zellweger, who stars in "Judy," chose a strapless soft hue of blue, and Kerry Washington was bold in a black look with an open chest covered in bedazzled straps. Michelle Williams was dressed in Louis Vuitton, a custom look in soft orange with one dropped shoulder.

Andrew Scott, the "hot priest" from "Fleabag," left his cream tuxedo jacket unbuttoned for interviews and wore a huge smile on his face during his first trip to the Globes, a dark curl falling over his forehead.

"I like how he has the courage to say anything," Roman told E!

Billy Porter, the "Pose" nominee and fashion trailblazer, failed to disappoint in an epic long train in cream. It was adorned with white feathers and attached to a tuxedo jacket in the same hue. It's a custom look by Alex Vinash and -- bonus -- the train zips off.

"It is a dinner and I do have to sit down," he smiled.

"It's really odd to have to work on clothes before you're even nominated," he said.

The gender-bending star and singer carried a mirrored bag by Emm Kuo, with a diamond dragon fly on one lapel by Tiffany & Co.

Fred Leighton had a big night, providing jewels for Meryl Streep, Jennifer Aniston, Kidman, Dunst and Rooney Mara, to name a few. So did Harry Winston, who adorned Helen Mirren ($4 million worth), and Joey King, along with a slew of others. King wore one of the evening's most interesting looks: An optical swirl of black and white stripes. It was a short dress with a ruffly cape effect and a delicate high collar that continued the lines.

IN PHOTOS: Celebrities walk the red carpet at 2020 Golden Globes

A mix of risk-takers and classic Hollywood at Golden Globes

A list of the final Golden Globe Award winners for film, TV