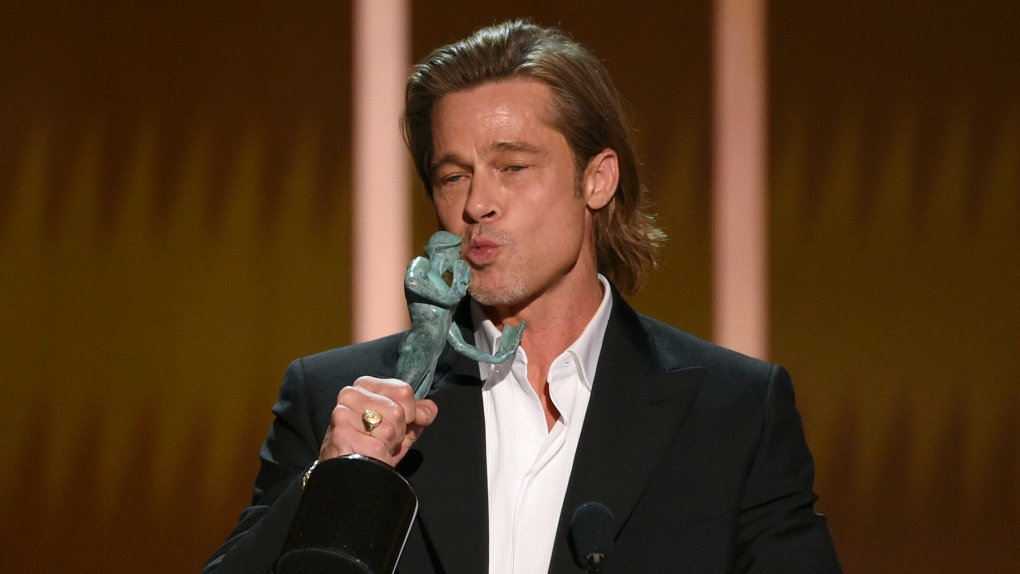 Brad Pitt kisses "The Actor" statuette as he accepts the award for outstanding performance by a male actor in a supporting role for "Once Upon a Time in Hollywood" at the 26th annual Screen Actors Guild Awards at the Shrine Auditorium & Expo Hall on Sunday, Jan. 19, 2020, in Los Angeles. (Photo/Chris Pizzello)

In an awards season with plenty of question marks, little has been more certain than the best supporting actor favourite, Pitt, who is headed toward his first acting Academy Award for his performance in "Once Upon a Time ... in Hollywood." Pitt, who said he was nursing a flu, looked down at his award and said, "I've got to add this to my Tinder profile."

"Let's be honest, it was a difficult part. A guy who gets high, takes his shirt off and doesn't get on with wife," joked Pitt. "It was a big stretch." The audience laughed and clapped, including -- as the cameras captured -- Jennifer Aniston.

With a win for best female actor in a supporting role, Dern further established herself as the category's front-runner at next month's Academy Awards. On her way to the stage, she hugged her father, Bruce Dern.

Phoebe Waller-Bridge continued her awards sweep for "Fleabag," a winner at the Emmys and the Golden Globes. Waller-Bridge added a SAG win for best female actor in a comedy series and took a moment to reflect on the show's parade of accolades.

"This whole thing really has been a dream, and if I wake up tomorrow and discover it was just that, then thank you," said Waller-Bridge. "It's been the most beautiful dream."

"The Marvelous Mrs. Maisel" also continued its streak, winning best comedy series ensemble for the second straight year, along with Tony Shalhoub for best male actor in a comedy series. But accepting the ensemble award, the show's shocked Alex Borstein said she had voted for "Fleabag."

"Honestly this makes no sense,' said Borstein. "`Fleabag' is brilliant."'

Among the films vying for the screen actors' top honour, best ensemble, are Oscar heavyweights "Once Upon a Time ... in Hollywood" and "The Irishman." They are competing with "Parasite" (only the second foreign language nominee after "Life Is Beautiful," which received a nod in 1999), "Jojo Rabbit" and "Bombshell."

Because actors make up the largest percentage of the Academy of Motion Picture Arts and Sciences, their picks are closely watched. But the last two years, the SAG ensemble winner has not gone on to win best picture: "Black Panther" last year and "Three Billboards Outside Ebbing, Missouri" in 2018.

Two of this year's top best-picture contenders at the Oscars -- "Joker," more of a one-man show; and "1917," more acclaimed for its technical acumen -- weren't nominated for best ensemble. On Saturday, "1917" won top honours at the highly predictive Producers Guild Awards, which 21 of the last 30 years has lined up with the eventual best picture winner.

Robert De Niro was to be honoured with the guild's lifetime achievement award. Awards for stunt ensemble were announced ahead of the ceremony, with prizes going to Marvel's "Avengers: Endgame" and HBO's "Game of Thrones."

The show is being broadcast live on TNT and TBS from the Shrine Auditorium in Los Angeles.