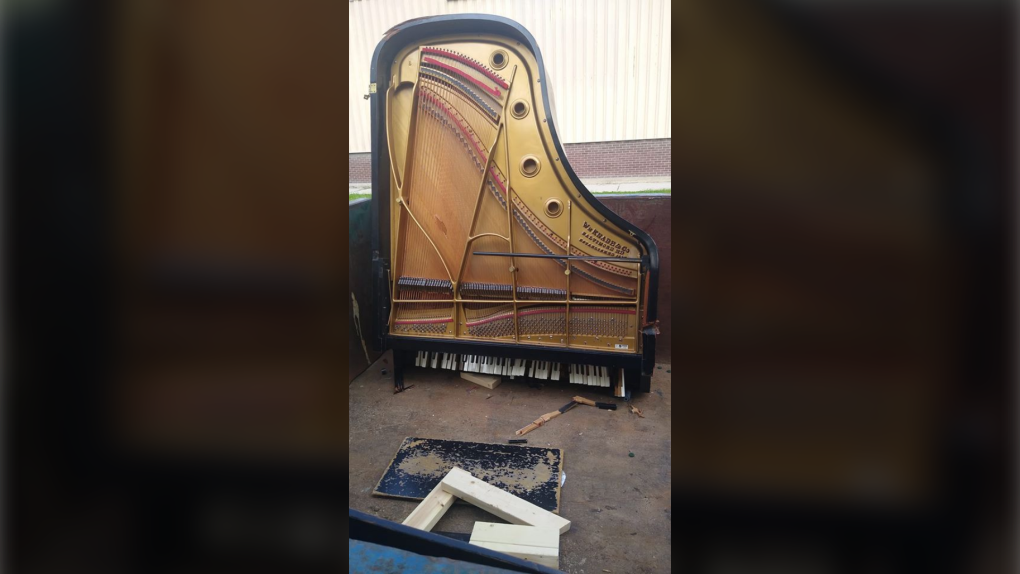 Dean May shared this photo of a Knabe grand piano sitting in a dumpster after it was thrown out by Indiana State University. (Dean May)

TORONTO -- An Indiana university’s decision to throw out pianos has struck a chord with music lovers after a piano technician shared a photo of one of the discarded instruments, a grand piano, that he says was worth US$10,000 and in “excellent condition.”

Dean May, a piano technician based in Terre Haute, Ind. with more than 40 years of experience, said a week ago he was inundated with messages and phone calls from people informing him that Indiana State University (ISU) had thrown pianos into dumpsters outside the school.

He initially assumed the instruments were probably just in bad shape, likely from the dormitories instead of the music department, because he knew the school had thrown out pianos like that in the past.

“I thought I’ll just swing by and take a look at the dumpsters to see what I found and I was just stunned and shocked,” he recalled to CTVNews.ca during a telephone interview from Indiana on Friday.

May said he heard that as many as 20 pianos had been tossed out, but when he arrived at the school, most of them had already been removed by the public and only a few remained.

Of the instruments that were left, however, May said he saw a beautiful seven-foot-long Knabe grand piano that had been pitched “nose first” in to the dumpster.

“I could tell by observing that this was a high-end piano,” he said. “It looked to be in excellent condition. The strings didn’t have any tarnish on them, the soundboard was good, the finish, what hadn’t been destroyed, was good.”

The piano technician said he estimates the instrument could have been worth $10,000 after he compared smaller models in a similar condition on eBay that were worth nearly as much.

May said he also saw a “fairly nice” Yamaha grand piano in one of the dumpsters that was smaller than the Knabe, but could have also fetched several thousand dollars on eBay.

In an effort to find out why the school had dumped the pianos, May said he called his friend, James Stone, who works as a piano technician for ISU. He said Stone told him the Knabe grand piano had been promised to him and he had been planning to purchase it to put in his living room along with several others to refurbish and sell.

May said other faculty members in the music department told him the other pianos, that Stone didn’t want, were supposed to go up for auction.

“My technician friend told me that these pianos all came out of the music department, not out of dormitories, so they were all reasonably maintained,” May said.

“It seems to be somebody made a mistake, they were intended to go to the auction, because you don't throw away pianos that are worth several thousand dollars.”

However, Mark Alesia, the director of communications for ISU, said the school had different plans for the old pianos.

“Indiana State University tried repeatedly to donate about 10 old pianos, virtually beyond repair, to community organizations. ISU officials contacted at least 15 such organizations --- including Vigo County Schools, the YMCA, and Catholic Charities --- to offer the pianos for free,” an emailed statement to CTVNews.ca on Friday read.

Alesia said six pianos went up for public auction within the past two years and three of them were sold for $25 or less. He said the school also contacted used furniture vendors in Indianapolis and Bloomington and neither of them were interested in the pianos.

“ISU contacted two Terre Haute moving companies. One had no interest and the other replied that it already has enough pianos. Disposing of the pianos was the last option after other options had been exhausted,” Alesia wrote.

Since May shared the photo of the grand piano in the dumpster on Saturday, the post has been shared more than a thousand times and has received hundreds of comments from people expressing outrage at the instrument’s disposal.

“It was just distressing,” he said. “There’s something about seeing a grand piano thrown away, a nice-looking grand piano. It’s an emotional response in people.”