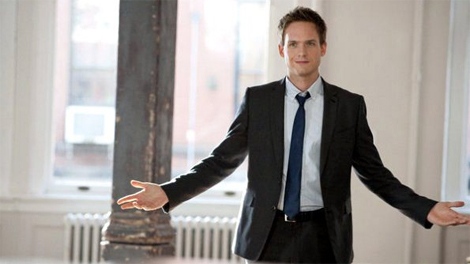 TORONTO -- Canadian actor Patrick J. Adams is defending his "Suits" co-star Meghan, the Duchess of Sussex, as she and husband Prince Harry square off against media critics and the British Royal Family.

Toronto-raised Adams has posted a series of tweets praising Meghan and admonishing what he calls "the endless racist, slanderous, clickbaiting vitriol spewed in her direction from all manner of media across the U.K. and the world."

Adams also criticizes the Royal Family in his tweets, which end with him telling Meghan's detractors to "find someone else to admonish, berate and torment," adding she is way out of their league.

Meghan and Harry, who live in California after stepping back from royal duties, are set to speak about life at Buckingham Palace in a TV special with Oprah Winfrey on CBS and Global on Sunday.

Teaser clips from the two-hour prime-time interview show Meghan saying "the firm" -- a nickname for the Royal Family -- is playing an active role "in perpetuating falsehoods about" herself and Harry.

Harry also talks about his fears that history would repeat itself after his mother, Princess Diana, died in a car crash while pursued by paparazzi.

Meghan, a biracial former actor who is pregnant with the couple's second child, has faced relentless criticism in the British press since marrying Harry in 2018.

As Sunday's interview clips circulate, new accusations have surfaced against her in the Times of London, with a former aide accusing her "bullying" Royal Family staff in 2018.

Buckingham Palace said Wednesday it was launching an investigation into the allegation.

Adams and Meghan played a couple working in the legal world on "Suits," which was shot in Toronto from 2011 to 2019.

Adams said Meghan "was an enthusiastic, kind, co-operative, giving, joyful and supportive" friend and colleague, and remained so as her "fame, prestige and power accrued."

"She has always been a powerful woman with a deep sense of morality and a fierce work ethic and has never been afraid to speak up, be heard and defend herself and those she holds dear," Adams wrote on Twitter. "Like the rest of the world, I have watched her navigate the last few years in astonishment."

Meghan Markle and I spent the better part of a decade working together on Suits. From day one she was an enthusiastic, kind, cooperative, giving, joyful and supportive member of our television family. She remained that person and colleague as fame, prestige and power accrued.