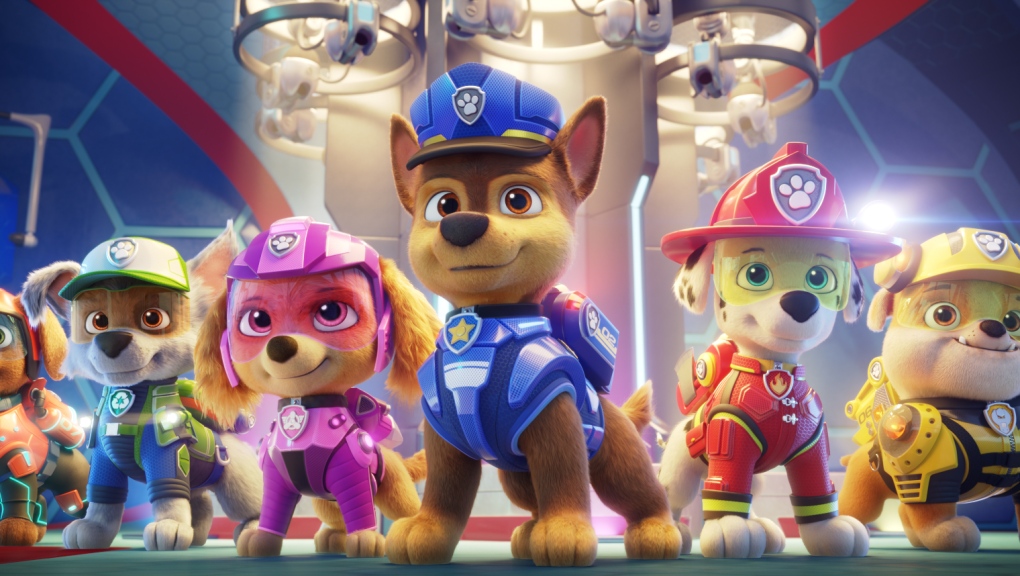 Many parents will be having a tough talk with their kids this weekend to explain why "Paw Patrol: The Movie" isn't available to watch at home in Canada.

The highly anticipated children's animated film, based on the homegrown toy franchise and TV series, opened in Canadian theatres Friday but some of its marketing materials have encouraged kids to stay inside and stream the film on Paramount Plus.

That's caused confusion with some families who've taken to social media to ask why the film isn't available on the streaming platform in Canada, like it is in the United States, where the at-home streaming option also allows for repeat viewings.

The problem arises from complications around the film's ownership, which varies by territory.

"Paw Patrol: The Movie" is distributed by Elevation Pictures in Canada, while Hollywood studio Paramount Pictures handles the stateside release.

During the COVID-19 pandemic, Paramount has been dabbling with different release models and chose "Paw Patrol" to experiment with a simultaneous theatrical and streaming release.

As part of the rollout, social media accounts for Paw Patrol as well as Paramount Plus began to trumpet the film as having a streaming option, without noting that it's only for U.S. viewers.

A representative for Paramount Plus did not immediately provide comment.

Canadians have long complained about how difficult it can be to determine which streaming service is carrying their favourite show or new movie, but rarely does it affect such a popular Canadian brand as Paw Patrol.

The globally known franchise about a precocious boy and group of rescue dogs is owned by Toronto-based toy creator Spin Master, which has become a force in the children's entertainment industry.

Paramount Plus is still trying to get off the ground on both sides of the border.

After years of operating under the CBS All Access name, the streaming platform owned by ViacomCBS Inc. underwent a surface makeover with one of Hollywood's most recognizable logos to help it stand out in the streaming wars.

But in Canada, Paramount Plus is hardly a significant competitor in an industry dominated by a few major players. The platform still houses only a small selection of mostly older TV series and films, as well as a handful of exclusive new shows.

Earlier this summer, Paramount Plus made an aggressive play in the marketplace by promising to debut several of its major films on the platform after an exclusive run in theatres. In Canada, however, the plan hasn't taken shape in the same way.

"A Quiet Place Part II" moved to Paramount Plus after a short theatrical window stateside, but in Canada, it was rerouted to make its debut on Amazon Prime Video, one of Paramount's main competitors.

This report by The Canadian Press was first published August 20, 2021.

An Amber Alert issued on Monday for two Saskatchewan children has been extended into South Dakota. Saskatchewan RCMP say evidence uncovered during their investigation suggests the children may be in the U.S. state.

Whether an FBI search of Trump's Mar-a-Lago residence is a prelude to criminal charges is unknown. The action Monday nonetheless focuses attention on the thicket of statutes that govern the handling of government records, though the department's own history of prosecutorial discretion makes it hard to forecast with certainty what might happen this time.

China on Wednesday reaffirmed its threat to use military force to bring self-governing Taiwan under its control, amid threatening Chinese military exercises that have raised tensions between the sides to their highest level in years.

Legacy of Serena Williams extends beyond success on tennis court

Serena Williams indicated on Tuesday she is preparing to walk away from her professional tennis career as the start of the U.S. Open approaches on Aug. 29 and her 41st birthday approaches next month. She would leave behind a legacy that extends beyond her dominance on the court.