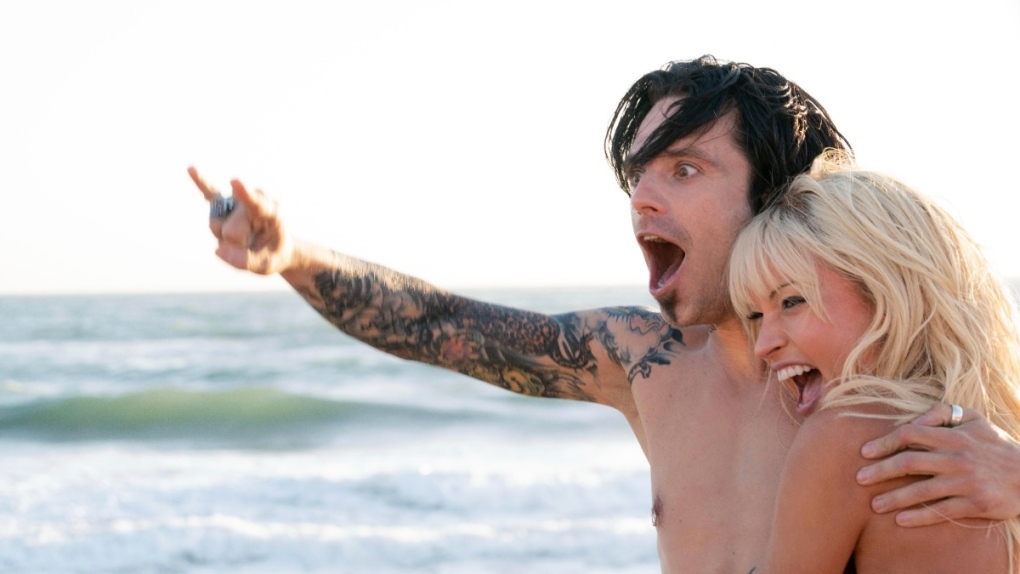 An impactful, if not cringe-worthy moment in the new Hulu series, " Pam & Tommy, " is when Lily James as Pamela Anderson is interviewed by Jay Leno on "The Tonight Show" and he asks her about her sex tape with then-husband Tommy Lee. "What's it like to have that kind of exposure?" He asks.

"What's it like?" responds Lily James as Anderson. "It's horrible ... It's devastating."

Jokes about the sex tape were regular monologue fodder for Leno at the time. What perhaps was amusing in 1996 is disturbing in 2022.

James says this fresh perspective is a point of the series, based on a Rolling Stone article written by Amanda Chicago Lewis in 2014.

"We're looking back at these stories as kind of reckonings and realizing our own culpability in the way people have been treated and how as a society we treat women, particularly, not only through the media, but in all different levels," said James. "It's good to provoke a conversation, and it's important for us all to sort of look inward and look at ourselves and try and do better."

Yes, "Pam & Tommy" recreates the whirlwind courtship of a rock musician and TV star and their impulsive marriage. But the big takeaway for viewers is that the sex tape was not leaked to the public by Anderson or Lee, nor was it sold by them either. The tape was discovered in a safe that was stolen from their home by a carpenter (portrayed by Seth Rogen, an executive producer on the project) who had been fired from a construction job at their house. When Lee refused to pay him or give him his tools, he snuck back onto the property and stole the safe, hoping there was money and valuables inside. The tape ended up exchanging various hands, sold and also posted online.

While the series is entertaining, sometimes funny, and has a good soundtrack, it can be sad and infuriating too. It's about how this couple had their privacy invaded, leading to major stress in their lives and on their marriage. Anderson has said they never made any money from the tape and she has never seen it.

So, how do you begin to portray a couple with larger-than-life personas, especially when neither Anderson or Lee are involved in the project?

A lot of research, says Stan, not to mention hours in the makeup chair for both actors.

"I don't have a single tattoo on my body, so the idea of being completely covered in tattoos was nerve-wracking because I felt like I don't know what that is. I don't have that confidence to go and do that," said Stan. "So it was really scary. But then obviously, Tommy looked a certain way. There was a weight loss that I had to kind of do. I had to sort of eat very specifically, and I would do these long fasting periods and then I would run and hike and, you know, try and get 20,000 steps a day. And that was four months."

James said she and Stan "would go up and down" as to rating their own performances.

"Sometimes you'd feel really in it and on. When I had the final fittings and the costume and the hair and the makeup and everything was going on, it was pretty crazy to like suddenly feel like your whole body changes. The acting just sort of slid into place," James said. "But also it's great to feel so challenged and to sort of lean into a transformation that feels extreme. That part was really fulfilling."

To commemorate the experience, Stan says he has wondered if he should get a tattoo for real.

"I have thought about it many, many times, but I feel like the pressure of it now is sort of like, what's that first tattoo going to be, you know? And I am old. (He's 39.) Am I going to get a massive tattoo on my back? Am I at the Ben Affleck stage yet?" (Affleck has a large tattoo on his back of a phoenix.)

James says there's a scene in "Pam & Tommy" where she gets tattooed by the famed tattoo artist, Mark Mahoney, who did tattoos for Anderson and Lee.

"I really want him to give me a tattoo," she said. "But I have no idea of what."

The 18-year-old gunman who killed 21 people at a Texas elementary school walked in unimpeded through an apparently unlocked door, a law enforcement official said Thursday. The gunman was apparently inside the building for at least three-quarters of an hour before U.S. Border Patrol agents stormed a classroom and killed him.

Multiple Toronto schools were in lockdown after a male was shot near an elementary school in Scarborough’s Port Union area on Thursday afternoon, first responders and an eyewitness said.