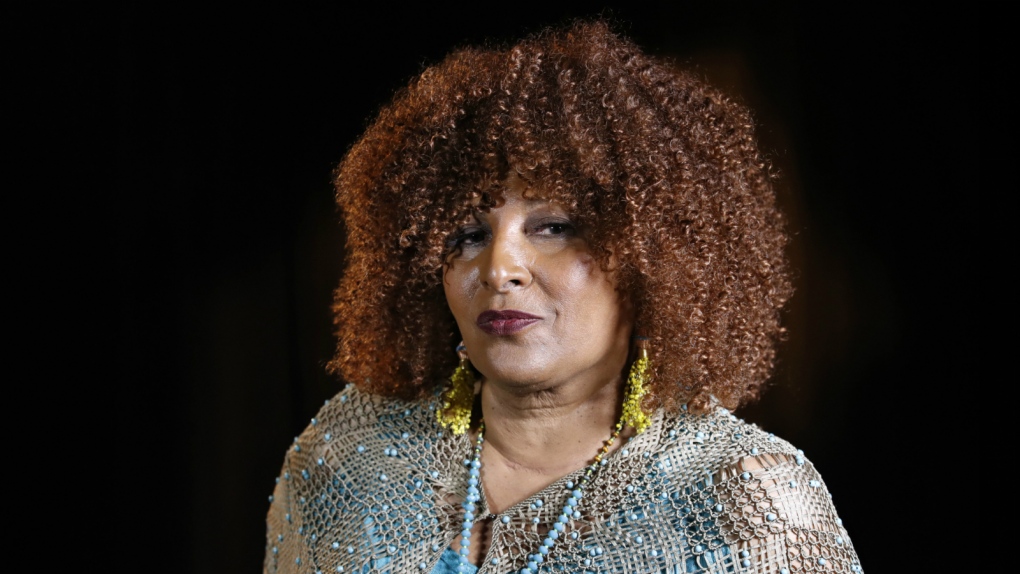 Actress Pam Grier is interviewed by The Associated Press in Washington on Aug. 25, 2017. (AP / Jacquelyn Martin)

WASHINGTON -- Even at 68, Pam Grier looks like she can still kick butt.

And the looks don't deceive, Grier said. While having never played a superhero, "I'm super in real life," said Grier, smiling and flicking back some of her flowing hair.

Grier is still going strong in an almost 50 year film and television career. In an interview with The Associated Press last week, she discussed some of the changes in Hollywood and the return of the female action movie star. "I don't know why people were surprised at the success of 'Wonder Woman,"' said Grier, star of gritty 1970s action movies like "Foxy Brown," "Coffy," "Black Mama/White Mama," and others.

Women like Grier and Angie Dickinson paved the way for current female action stars like Gal Gadot and Charlize Theron, and a new wave of black female stars like Taraji P. Henson in her upcoming "Proud Mary" and Meagan Good, who is remaking Grier's classic "Foxy Brown."

But being an action star has its cost: Grier said she hurt herself numerous times doing stunts, including filming "Coffy." "I almost broke my ankle," she said. "They painted my cast to look like a boot, and I'm limping. And I was 'Does this look good?' It looks good."

Luckily today's actors have stunt doubles and better equipment, Grier said. When asked about the difference between doing action today and back during her day, she laughed and said: "Sports bras."

Grier has nothing but good wishes for the remake of "Foxy Brown" and Good.

"It's going to be interesting," she said. "You see, I didn't have a stuntwoman until 'Foxy Brown.' And Meagan, she's going to do great with stunts. She'll get the sports bra I didn't have. And you ask me would I do it again? Yeah, if I had a great sports bra."

Grier was in Washington, D.C., this past weekend to be honoured at the annual "Salute Her: Beauty of Diversity Awards Luncheon."

Surprisingly, Grier said she has never been inside the new Smithsonian National Museum of African American History and Culture, where she plans to donate some of her movie wardrobe. Part of the reason for her delay is that she wants to go with her mother, Gwendolyn Grier, who lives with her in Colorado but doesn't fly on airplanes, so it would require a cross country road trip.

Grier's also never been inside the White House, but don't expect her ask President Donald Trump for an invite. Grier said she was offered a chance to be on the "The Apprentice" but turned it down, saying she does her "due diligence" on people before working with them.

Grier is also promoting the Brown Sugar moving streaming service, which streams iconic black movies like Grier's "Jackie Brown," "Black Mama/White Mama" and others. For Grier, the service is a godsend because her elderly mother can watch some of her lesser-known movies at home that she missed while raising multiple children and making ends meet.

"Now that she's aging and not well, it's the best time to sit with her and watch Brown Sugar," Grier said. "It brought such joy to her to watch films she hadn't seen, and to see her crushes, to see Billy Dee Williams, Sidney Poitier, Eddie Murphy, just to see Harry Belafonte, Eartha Kitt, Richard Pryor."

She's also working on turning her bestselling autobiography, "Foxy: My Life in Three Acts," into a movie, and has some dream casting in mind: comedian Jay Pharoah as Richard Pryor and Roberto Benigni as Italian director Federico Fellini.

Who does she see as Pam Grier?

"I don't know, but whoever it is has to bring it!" she said.

Jesse J. Holland covers race and ethnicity for The Associated Press in Washington.