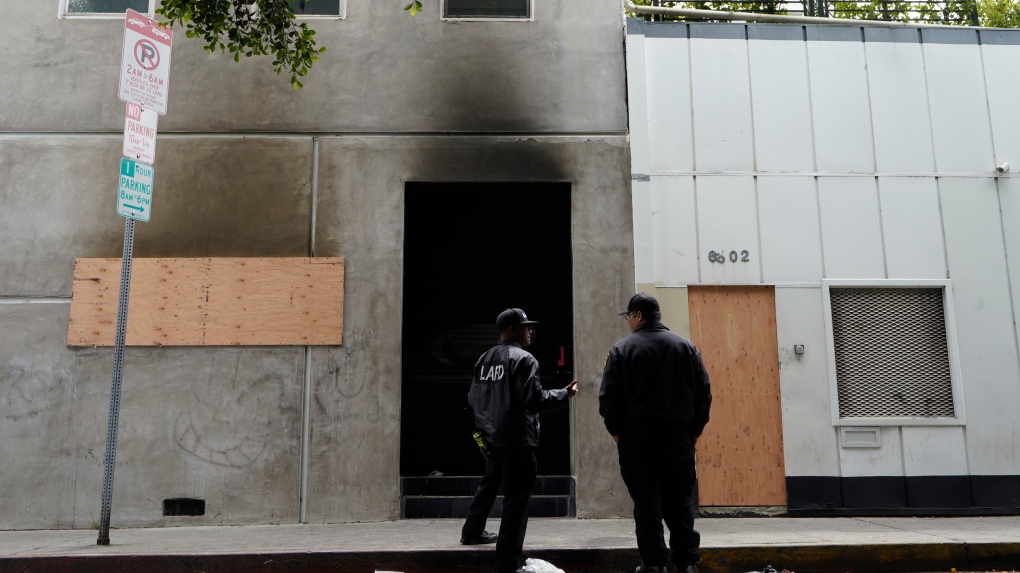 Ozzy and Sharon Osbourne's daughter Aimee was among those who escaped a Hollywood recording studio fire that killed a 26-year-old music producer, Sharon Osbourne and others who work in the space said.

Two people reported respiratory symptoms related to smoke exposure and were evaluated at the scene, but both declined to be taken to a hospital, Scott said.

"Sadly, one person was found dead inside, as firefighters searched the structure," Scott said, adding that no firefighters were injured and the cause of the fire is under investigation.

Authorities had not released the identity of the person killed, but friends and others who worked in the building, including musician and record label owner Jamal Rajad Davis, identified him as 26-year-old Nathan Avery Edwards, who recorded, produced and mixed music under the name Avery Drift.

One of the survivors was the elder daughter of Sharon and Ozzy Osbourne, Sharon Osbourne said in an Instagram post.

Aimee Osbourne, 38, and a producer she was working with were "the lucky two that made it out alive," Sharon Osbourne said, without identifying the producer.

"Our prayers go out to the family and friends of the person that lost their life to this senseless fire," Osbourne said.

Aimee Osbourne is a singer who releases electronic pop music under the name ARO, her initials. She did not take part in the Osbourne family's reality show as her younger siblings Kelly and Jack Osbourne did.

Davis, whose stage name is Jamal Rajad, both lives and works in his space in the building with his wife and four cats. He thought his wife was burning incense when he began to see and smell smoke.

He said he and others emerged into the hallway and it became clear that smoke and serious heat were coming from a unit a few doors down. The man from that space had locked himself out and began trying to break the door open as Davis and others shouted for him to stop.

He got it open and it was, "Boom! Big old flames!" Davis told The Associated Press in an interview.

At that point Davis began to yell to Osbourne and others to get out as he ran back to his space.

"I grabbed everything big, my 65-inch TV, my PlayStation interface in my studio, my internet box, grabbed whatever I seen that was right there that I thought was important," he said.

He dropped the stuff outside and tried to run back in to get his cats, but it was too late.

"I was already choking," he said. "So I took my shirt off, tied it around my face, and I tried to get a little bit further. I made about five or six steps and I couldn't make it to my kitties."

Jonathan Wellman, who rented a recording space in the building down the hall from Edwards, told The Los Angeles Times he was "a talented young artist, producer, engineer."

Davis said several people were able to follow the sound of his voice to a safe exit.

"I'm grateful for that, he said, but ungrateful that Avery died. He was on the bottom floor with us. I didn't realize. I only had a few seconds. I couldn't even save my cats."

Davis, Wellman and others said they heard no smoke detectors and saw no sprinklers go off.

It was not immediately clear if the building had any code violations or citations.