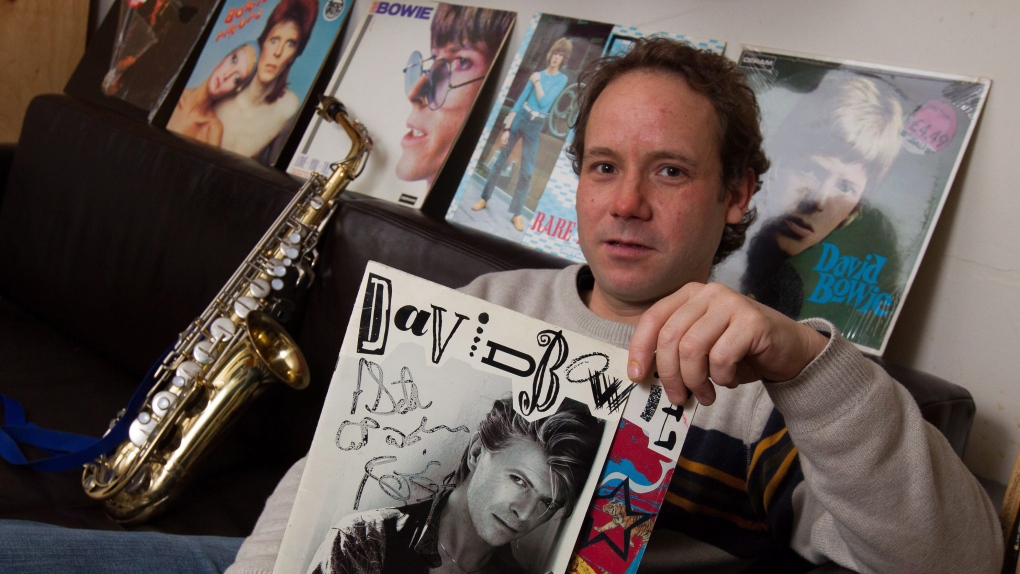 Seth Scholes poses with his saxophone and a magazine in Kingston, Ont., on Monday Jan. 11, 2016. (Lars Hagberg / THE CANADIAN PRESS)

TORONTO -- When Seth Scholes walked backstage to meet David Bowie nearly 30 years ago, the 11-year-old saxophone player from Kingston, Ont., was hardly aware of how the encounter would help shape his life.

It was a chance meeting with one of music's biggest icons, spurred on by a story about the pre-teen in the local newspaper.

When he thinks about the Aug. 24, 1987 encounter, he remembers how Bowie was "really cool, in the sense that he wasn't intimidating at all."

"He was just really sincere, easy to talk to and seemed genuinely interested in me," Scholes said in a phone interview on Monday.

Scholes was first discovered when a local reporter spotted him playing saxophone on a sidewalk in Kingston, where street performers were a rarity.

His youthful ambition was enough to merit a short news story; he said he was raising money to buy a ticket to one of Bowie's concerts.

The piece was picked up by The Canadian Press newswire and distributed across the country.

Somewhere along the line, Bowie's representatives caught word of Scholes's aspirations and offered his family passes to the singer's Toronto concert. And the boy would get to meet Bowie backstage.

"He asked me all sorts of questions and his sax player came out and taught me a few lines of 'Young Americans.' I played the best I could for him. He was pretty forgiving," Scholes recalled.

Scholes had another question for Bowie: whether he preferred Pepsi or Coke.

"There was all this Pepsi stuff around and he just looks at me and is like: 'Well, Pepsi's available,"' he said.

The meeting with Bowie lasted just over an hour, but the interest from Canadians stretched on for almost a year.

"I became a celebrity in my hometown," said Scholes. "With interviews and people stopping me on the street, and just a lot of interest in what happened to me."

TV shows like MuchMusic's "Mike and Mike's Cross Canada Adventures" highlighted him as the young kid who met the international megastar.

And then it was all over.

Decades later, Scholes says the encounter inspired his career. He works as a technical director at a theatre in Kingston.

"It solidified my interest in entertainment and music for sure," he said, noting that while he still occasionally plays saxophone, he prefers the guitar.

Scholes first heard about Bowie's death when a radio station called him while he was driving to work.

"That experience did project me on the path that I ended up taking -- it definitely had a big impact.

"It wasn't just meeting somebody famous."