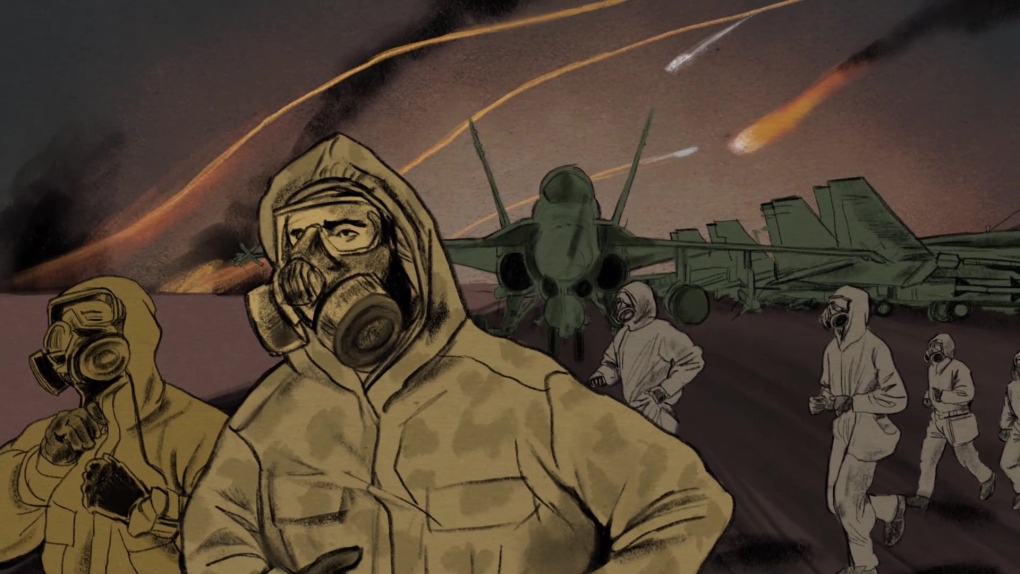 A scene from "Canada and the Gulf War: In their own words," a video by The Memory Project, a program of Historica Canada, is shown in this undated illustration. THE CANADIAN PRESS/HO - Historica Canada

OTTAWA -- Petty officer Richard Austin was sitting at his position on board HMCS Athabaskan when he heard a clang. It was 1991, and the Canadian destroyer was traversing an Iraqi minefield in the Persian Gulf, on its way to rescue a crippled American warship.

"I remember waiting for the bang," Austin recalls of those tense few moments nearly 30 years later. "Looking at the two pictures of my sons on the top of the weapons panel. The bang never came."

Austin's story is one of several Canadian experiences from the first Gulf War that were collected by Historica Canada and released on Sunday as part of a new video on what is a largely forgotten chapter of Canada's military history.

Sunday marked the 30th anniversary of Operation Desert Storm, the massive attack that eventually resulted in U.S.-led forces pushing the Iraqi military from Kuwait, which Iraq had invaded in August 1990 under then-president Saddam Hussein.

That was despite Canada being one of dozens of countries to condemn Iraq's invasion, with three Canadian warships as well as fighter aircraft, security personnel and medical troops deployed in support of the American coalition that liberated Kuwait.

Veterans Affairs Canada says around 4,500 Canadian military personnel served during the war, which was broken into two phases: Operation Desert Shield, which saw a build-up of forces from August 1990 to January 1991, and Operation Desert Storm.

The latter started with a massive air attack on Jan. 17, 1991 against dug-in Iraqi forces before a devastating ground invasion that lasted two months. Tens of thousands of Iraqi troops were killed while around 300 allied soldiers died. No Canadians died.

Historica Canada CEO Anthony Wilson-Smith believes the fact no Canadians were killed is one reason there is little recollection or appreciation for what Canada did in the war. That is despite the fact many veterans suffered injuries during the conflict.

“I ate, slept and breathed Gulf War all the time.”

30 years later, hear from LCol (Ret’d) Susan Beharriell and three other @Memory_Project speakers in our NEW video, now available to watch on YouTube at https://t.co/6N0fSYTNe5. pic.twitter.com/KMMBkTntrw

Signaller Bob Crane, who was a captain during the war, is one of those service members featured in the video who speaks about struggling with post-traumatic stress disorder after returning home.

Wilson-Smith also feels that the first Gulf War has largely faded into history as other events, particularly the terrorist attacks on 9/11 and the decades of conflict that have followed, have overshadowed what came before.

While Canada was quick to condemn Iraq's invasion of Kuwait, in which Baghdad hoped to gain control of the smaller country's expansive oil reserves, the decision to send troops to participate in the U.S.-led coalition was controversial.

The Progressive Conservative government of day faced some opposition to the idea, before the Liberals supported military involvement. Even then, Canada played a largely supporting role, though its CF-18s did conduct some airstrikes on Iraqi targets.

Many of those interviewed for the video speak about the fear and anxiety that came with fighting a country that had a known stockpile of chemical and biological weapons -- and which had a history of using them.

"It weighed heavily on everyone's mind," Crane says at one point.

Wilson-Smith is hoping the video, which is available online and will be shared with teachers across the country, will shine a light on Canada's role in the conflict and the dangers that Canadian troops faced there.

"That's one of the reasons why we did, to make it better known, because even though we didn't lose any of our people there, obviously we couldn't -- and didn't -- know that going in," he said.

"And the second is to make people aware of this extraordinary experience undertaken by about 5,000 Canadians, most of whom, the vast majority of whom, are still walking among us."