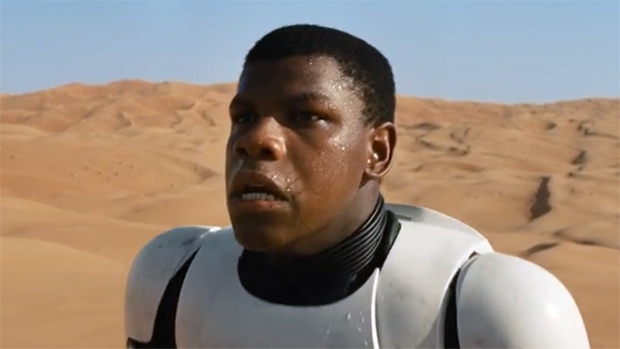 John Boyega is shown in the role of Stormtrooper FN-2187, a.k.a. Finn, in this still image from 'Star Wars: The Force Awakens.' (Disney)

The new “Star Wars” film, “The Force Awakens” includes a subtle tribute to a Canadian filmmaker, who is said to have partially inspired the franchise’s concept of the Force.

In the film, John Boyega’s character is introduced as a nameless Stormtrooper of the First Order, with the serial number FN-2187 (later shortened to a real name, “Finn”). The digits in his serial number are no accident: they’re the second time “Star Wars” has referenced the numbers “2187” on screen, as a quiet homage to the work of Montreal filmmaker Arthur Lipsett.

Lipsett was an experimental 1960s filmmaker who would often splice footage from various sources into video collages, which he released as short films through the National Film Board of Canada. One of those films, titled “21-87,” includes a line of dialogue about “some kind of Force” that puts people “in communication with other living things,” and exists “behind this apparent mask which we see in front of us.”

If that sounds familiar, here’s how Jedi Master Yoda describes the Force in “The Empire Strikes Back”: “Life creates it, makes it grow. Luminous beings are we, not this crude matter.”

“Star Wars” creator George Lucas has said “21-87” was a major influence on him during his film school years, and an inspiration for the Force in his “Star Wars” films. “21-87” includes nearly 10 minutes of crowd footage, spliced together with dialogue that discusses human nature in a machine-like society.

Lucas included a nod to the Lipsett short in his first “Star Wars” film, in which Princess Leia’s cell number on the Death Star was 2187.

The National Film Board of Canada also refers to “2187” as a major influence on Lucas.

The Force-inspiring dialogue can be heard at the 3:30 point in Lipsett's film.